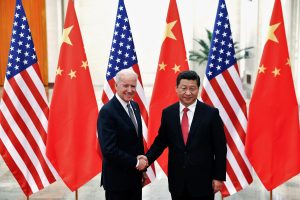 When Biden ran for President a dozen years ago, he offered several different lists of who our overseas rivals were. At the South Carolina primary debate in April, 2007 he said it was “North Korea. Iran not as big a threat, but a long-term threat. And quite frankly, the tendency of Putin to move in a totalitarian direction, which would unhinge all that’s going on positively in Europe.” In an August interview, he said Pakistan was “potentially the most dangerous country in the world.” A year later in a speech to the Democratic national convention, he attacked President George W. Bush for having “failed to face the biggest forces shaping this century. The emergence of Russia, China and India’s great powers, the spread of lethal weapons, the shortage of secure supplies of energy, food and water. The challenge of climate change and the resurgence of fundamentalism in Afghanistan and Pakistan, the real central front in the war on terror.”

Perhaps his strongest criticism of China during his previous primary run came during an NPR debate in December, 2007 when he complained, “At the UN, we won’t even designate China as a violator of human rights. Now, what’s the deal there? We talk about competition in terms of trade. It’s capitulation, not competition. Name me another country in the world that we would allow to conduct themselves the way China has, and not call them on the carpet at the UN.” In his criticism of past trade policy this could be a statement today from President Donald Trump.

Over a decade later, Biden’s mood has mellowed. At the Penn Biden Center website, China gets mentioned in a section titled, “Advancing the Dialogue of Globalism.” The section opens with a photo of Vice President Biden meeting with then-Vice President Xi Jinping as they tour an irrigation project in China. This image presents the idea of “partnership”, a key theme in the Penn Biden dialogue in “an increasingly globalized world [which] has helped channel forces of change in the direction of progress.” Of course, the hope for positive change in China was widely held during the Post-Cold War euphoria. But things have not turned out as hoped. Now-President Xi has been accelerating changes both at home and abroad that cannot be considered “progress” by the standards of American values or interests. Yet, it seems that if a future President Biden were to meet Xi again the American leader would not understand how the times have passed. Indeed, the purpose of the Penn Biden Center is to stay in the imagined bliss of twenty years ago. “Populism and nationalism may slow the tide of globalism, but they cannot stop it.” is the strident claim.

But there can be very different concepts of globalism. During the Cold War strategists learned to think world-wide. The concept held by the Chinese regime is of global expansion as laid out at the Second Belt and Road Forum for International Cooperation held last month in Beijing. And supported by the construction of a “blue water” navy that can operate on a global scale.  “China’s advancement of projects such as the ‘One Belt, One Road’ Initiative (OBOR) will probably drive military overseas basing through a perceived need to provide security for OBOR projects,” is the Pentagon forecast in this year’s annual report to Congress on Military and Security Developments Involving the People’s Republic of China 2019. A connection Beijing’s imperialists have planned from the start.

Vice President Biden had a front seat to the naval and military exercises conducted by China in support of North Korea in 2010 and the maneuvers President Barack Obama reluctantly ordered in response as Secretary of State Hillary Clinton aligned the nations along the Pacific Rim into a diplomatic front against Beijing. And he was in the midst of the White House-State Department split over China policy as Obama pulled the rug out from under Secretary Clinton to “ease tensions” at his 2011 summit with Xi’s predecessor Hu Jintao. Secretary Clinton was replaced in Obama’s second term by the more dovish John Kerry.

Biden was certainly aware of the contrast between Presidents Xi and Obama at the 2014 Asia-Pacific Economic Cooperation (APEC) meeting held in Beijing. President Xi talked about his “Asia-Pacific dream”, which alarmed many in the audience because it was an expansion of the reach of the “China dream” Xi had espoused at home. Meng Xiangqing, deputy director of the Institute for Strategic Studies at China’s National Defense University, wrote an op-ed in the state-run China Daily the previous year to explain: “As President Xi Jinping has said, an important task for the country under new circumstances is to build a strong military that is ‘absolutely loyal’ to the Communist Party of China, will abide by discipline and be ready to ensure victory in any war. A solid military is a prerequisite for building a well-off society in an all-round way in China and rejuvenating the Chinese nation.”

President Xi repeated this nationalist creed at the Great Hall of the People in Beijing this year on April 30. It was a youth rally to celebrate the 100th anniversary of the May Fourth Movement, a popular protest which the Communists have incorporated into their narrative of revolution. Its real roots were nationalistic, an act of defiance against Imperial Japan whose position had been strengthened by gains made during World War I. Xi played on these same themes. According to state-run Xinhua News, “Xi said the May Fourth Movement gave birth to the great spirit centered on patriotism, progress, democracy and science, with patriotism at the core. ‘As long as the banner of patriotism is being held high, the Chinese people can unleash great powers in the endeavors to transform China and the world,’ Xi said, ‘The essence of patriotism is having unified love for the country, the Party and socialism’, Xi added”

The Penn Biden Center is thus a perfect fit to the larger Penn Global network. The first “pillar” of Penn Global is to “educate global citizens”, a rather different goal than the one President Xi set for Chinese students. The other pillars are meant to “Further Penn as a global agenda-setter and catalyst for innovative and transformative ideas.” The traditional concerns about national security, the balance of power and the diplomacy of alliances and alignments are not mentioned. This makes Penn Global a counter to the National Defense Strategy drawn up by the Trump administration which sees a return to Great Power competition with Russia and China as the major challengers to American preeminence.

A major program within Penn Global is the China Research and Engagement Fund (CREF). Established in 2015, it is not a leftover from the earlier optimism about China but a creation amidst rising tensions. The purpose of this project is “To develop new, or strengthen existing, institutional and faculty-to-faculty relationships with Chinese partners.” So again the terms “engagement” and “partner” are prominent as at the Penn Biden Center. These terms are in practice synonyms for the old term “appeasement” which has been dropped from enlightened discourse because of the horrendous results of its past practice. Unfortunately, liberals (or as they now prefer, progressives) are better at dropping words when they fail than the ideas behind the words when they fail.

Closely associated with the China Research and Engagement Fund is the Penn Wharton Center located in the central business district of Beijing. It is linked with the Wharton School of Business and highlights the role of transnational trade and finance in the “rise” of China and the desire to appease Beijing to keep the profits flowing. The thrust of its programs are to advance Chinese interests. Consider two papers presented by Wharton professors at the annual 2018 CREF seminar.

Ann Harrison, then the William H. Wurster Professor of Multinational Management, argued against any policy of “import competition” to benefit domestic production and jobs. She is the co-editor of a 2017 book entitled The Factory-Free Economy: Outsourcing, Servitization, and the Future of Industry. One theme of the book is that China should not be blamed for the deindustrialization of the U.S. because it is just a natural trend driven by the theory of comparative advantage. A globalist theory based on the world being a single polity (which it is clearly not). Harrison has since been named the Dean of the UC-Berkeley Haas School of Business.

Anne M. Greenhalgh, Deputy Director of the Wharton Leadership Program presented a paper on how to create “Sustainable Pork Production in China.” American pork producers see China as a major export opportunity and lobby constantly for improved trade relations. Yet, here the aim is for China to produce more pork itself and avoid having to import so much from the U.S. Beijing’s official policy is “food security” based on self-sufficiency so welcomes any help in formulating an import substitution policy. The Penn Wharton Center and the Penn School of Veterinary Medicine have been working with Chinese pork producers for years. The educational program they created “aims to help improve productivity, introduce sustainable swine farming practices, including animal welfare, and inculcate business and leadership skills.” The program also has funding from the CREF.

Is engagement also a synonym for collusion? If Biden is correct and China is “not competition for us” then Penn Global’s deep involvement in China may not matter in the larger frame of things. But if the world still runs on competition, on an international rather than a global basis, then the strategic consequences of Penn Global (and Penn Biden) actions and ideology could be debilitating to America’s preeminence in the balance of power. If U.S. leaders do not take the contest as seriously as do the Chinese, they will not make the effort needed to win. An election between Biden and Trump could put this issue at the center of attention where it ought to be given that the stakes could not be higher.