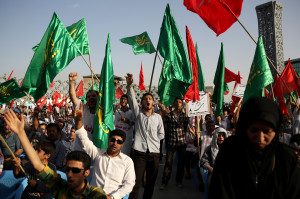 Iranians wave Islamic flags while chanting against the al-Qaida inspired Islamic State in Iraq and the Levant, ISIL, during a rally in central Tehran, Iran, Tuesday, June 24, 2014. (AP Photo/Ebrahim Noroozi)

In this July 20 interview with the Journal of Political Risk, Dr. Yeganehshakib discusses how the present conflict in Iraq will affect Iran’s role in the Middle East and its relations with the United States.

Reza Yeganehshakib  holds a Ph.D. in history with a specialization in World and Middle Eastern history at the University of California, Irvine (UCI). He received a B.S. degree in Chemical Engineering from Iran Azad University, and an M.A. in history from UCI, where he serves as a Research Associate at the Samuel Jordan Center for Persian Studies. Dr. Yeganehshakib is a member of the Middle East Studies Association and the International Society for Iranian Studies. He is affiliated with the Persian Language Institute at California State University, Fullerton and was previously affiliated with the National Iranian Oil Company. END_OF_DOCUMENT_TOKEN_TO_BE_REPLACED 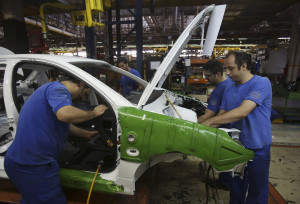 After the election of Hasan Rohani as the president of the Islamic Republic of Iran, there has been hope among Iranians and the international community for change in Iran’s economy and foreign policy.[1] Hasan Rohani, who is known for being relatively moderate particularly in comparison with his conservative predecessor, made several promises during his campaign regarding his government’s efforts to lift foreign sanctions, restore Iran’s relationship with the West, and decrease inflation, for example. The supreme leader’s approval of Rohani’s election can also be interpreted as an indicator of a potentially major shift in Iran’s policies. Considering Iran’s economic and strategic massive capacities, the incorporation of Iran into the global market and the possibility of further security cooperation between the U.S. and Iran will contribute to a more secure Middle East that can be used as a safe pool for investments. As Iran already proved in the Afghanistan and Iraq wars, its cooperation with the U.S. could contribute to the security of the volatile Middle East and an increase in foreign investment in the region. Likewise, the Syrian conflict and recent turmoil in Iraq have shown that Iran and the U.S., as well as Israel and other U.S. allies, have one enemy in common, the jihadists and Islamist radicals.[2] It seems that if Rohani can overcome the obstacles to Iran’s entering the global economic system such as sanctions, lack of a sustainable relationship with the West, and unresolved nuclear issue, Iran could become an investment hub in the Middle East, especially in the oil and gas industry.

END_OF_DOCUMENT_TOKEN_TO_BE_REPLACED

As the world continues to embrace cleaner and more efficient sources of energy over the next 25 years, natural gas stands to gain a large market share at the expense of less efficient and more pollutant coal and wood. The United States is currently the biggest winner from hydraulic fracturing and horizontal drilling that allow significantly increased production of shale gas. However, China, Argentina and Mexico are also potential gainers from these new technologies if they manage to overcome political and infrastructure challenges that have considerably slowed development of new gas fields. END_OF_DOCUMENT_TOKEN_TO_BE_REPLACED