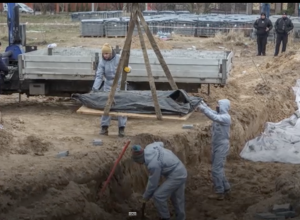 Police uncover the body of Karina Yeshiva, 22, in Bucha. Witnesses say she was tortured, raped, and shot in the head by Russian soldiers. Source: DW.

Since Russia’s invasion of Ukraine in February 2022, at least 4,000 civilians have been killed. Moscow has therefore been accused of targeting civilians. However, this is not the only tactic emerging. Acts of rape and sexual violence are also emerging as a weapon of war. In fact, the Office of the United Nations High Commissioner for Human Rights (OHCHR) released a report on the 3rd of June stating that they had already received allegations of 124 acts of conflict-related sexual assault in Ukraine. These reported assaults have mostly been against women and girls, ranging from gang rape, to coercion, to forcibly bearing witness to acts of sexual violence perpetrated against partners and children. Concerns surrounding human traffickers exploiting existing networks are also on the rise. A United Nations Security Council meeting, in particular, brought this to the attention of the world on June 6.