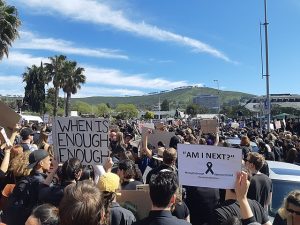 Anti-femicide protest in Cape Town in response to the murder of Uyinene Mrwetyana. Wikimedia Commons.

42,289. This is the number of women raped in South Africa in 2019. Such shocking levels of sexual violence have prompted President Cyril Ramaphosa to dub gender-based violence as a “second pandemic”, second only to COVID-19.

Violence against women does not end there. Murder rates against women are also extremely high. A widely discussed statistic amongst South Africans is that a woman is murdered every four hours. This statistic was for the April to December 2016 period. The most up-to-date statistics are even more shocking. In the 2017 to 2018 period, a woman was murdered every 3 hours. Such data has prompted a discussion of what is now called “femicide.”

According to the World Health Organisation, “femicide is generally understood to involve intentional murder of women becausethey are women, but broader definitions include any killings of women or girls”.

The current atmosphere is therefore one of fear, where women are the target of a disproportionate amount of violence in the country. More than that, they are subjects of this violence simply as a result of their gender. Whether you deem this reality a pandemic or a femicide, it is clear South Africa is facing a massive gender-based violence (GBV) problem.

The Dichotomy between Constitution and Practice

The above GBV problem is, interestingly, in great contrast to the country’s legal framework. According to the Fraser Institute, the most recent Economic Freedom of the World: 2021 Annual Report reveals a Gender Differential Index (GDI) score of 1.0. This is the highest possible score in terms of the gender adjustment variable. In other words, under the law, women are supposedly treated equally to their male counterparts. This has been the case since 1996 – two years after the country’s first democratic elections and one year after the Truth and Reconciliation Commission (TRC). On top of this sterling score, the President signed into legislation three new key pieces of legislation this year. The Criminal Law (Sexual Offences and Related Matters) Amendment Act, The Criminal and Related Matters Amendment Bill, and The Domestic Violence Amendment Bill, all of which aim to address the violence perpetrated against women in the country. Here, in great contrast to the picture painted above, we see a supposed utopia of gender equality.

This then poses the question: what is South Africa’s problem? The obvious answer is patriarchy and misogyny. Cultural realities make it very difficult to achieve this utopia. A prime example is male primogeniture in customary law, where inheritance is exclusively directed to male heirs. While South African law does allow for women’s property ownership and inheritance, it simultaneously protects specific cultural practices under customary law. As a result, there are cases where women are denied property rights, and are therefore excluded from a potential route out of the poverty cycle. Another practice can be found in female “initiation,” which can include the public announcement of a girl’s virginal status. Taking place between the ages of eight and twelve, initiation is significantly earlier than the Children’s Act premising the freedom to choose at the age of 16. Depending on the kind of initiation, it can be seen as a violation of privacy, dignity, or a form of discrimination or bodily harm.

This is a disconnect between how the community and the constitution treat women. Ultimately, South African women have de jure, but not de facto equality.

What is the solution to GBV in South Africa?

Having considered the above, we now have the difficult task of identifying a solution. Taking a historical view, one question to consider is, has South Africa ever addressed sexual violence? The TRC’s mandate being a gender-blind one, the nation cannot say that it has confronted its misogyny.

In 1995, the TRC was tasked with creating a platform to address the pain and violence that took place under the Apartheid regime. In order to qualify for amnesty, the crimes had to have occurred between 1960 and 1994, be deemed politically motivated, and finally, the perpetrator had to tell the complete truth when coming forward. And so, when considering political violence, the TRC excluded a gendered analysis, and, as a result, many acts of sexual violence. Women freedom fighters have since come forward as survivors of rape as a result of their time in opposition training camps. They were never, however, given the platform on which to air the crimes committed against them. For example, no PAC or MK soldiers were prosecuted or identified as having committed acts of sexual violence against their fellow female soldiers.

As such, sexual violence has not been adequately shunned on a national and public level, as has been the case with other crimes committed under Apartheid. The Apartheid regime not only having been a racist, but also being a sexist institution, the exclusion of a gendered lens seems rather arbitrary. All women were denied the franchise in Apartheid South Africa, and yet core women’s issues have been excluded from the country’s reconciliatory process. It is therefore unsurprising that women remain a target of sexual violence, when it was never addressed. The problem was allowed to fester.

The 2019 GBV protests show the country’s dissatisfaction with this festering. It may very well be a call for government to intervention on a national and public level. It is time for the country to give South African women a platform on which to air their grievances. The government should be facilitating nationwide conversations. Rapists must be shunned; survivors supported. Ultimately, acts of sexual violence must be viewed in the public domain with the same disdain as those politically motivated crimes in South Africa, up to the end of Apartheid in 1994.

Stephanie Wild has a B.A in Politics, Philosophy and Economics, accompanied by a B.A Honours in Justice and Transformation, from the University of Cape Town, where she is currently pursuing her MPhil in Public Law. Her research focuses on transitional justice and gender.