By Douglas Black, Hong Kong University of Science and Technology 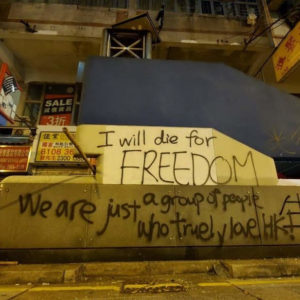 Carrie Lam has been allowed to withdraw Hong Kong’s maligned extradition bill after three months of continuing protests, but the situation continues to escalate. Protesting children are being taken from their families. There are allegations that protesters may have been killed by police and subsequently covered up. Both Beijing and the millions who live in the semi-autonomous territory are in need of real solutions, yet any solution to the current gridlock must include a serious look at the remaining demands represented by the protesters: remove Carrie Lam from her position, meaningfully investigate police misconduct, release activists and others in police custody, and safeguard Hong Kong’s nascent democracy.

Rather than the de-escalation Beijing intended by allowing the bill’s withdrawal, the situation is now made more precarious through two factors: (1) extreme pressure on Xi Jinping from both within the Party and beyond to quell the unrest before the PRC’s national day on October 1 and (2) a fundamental schism between the way the Party and many in the Chinese state see reality through their “China Dream” and the reality of the lives of millions of Hongkongers.

In essence, Beijing has backed themselves into a corner, but their worldview denies them visibility of the right solutions.

The worldview of Xi Jinping’s China

The conflict in Hong Kong between those striving for their human rights and those opposed is born of a collision between two realities: China’s vision of how it sees itself and the world, and how much of the world sees China. Through censorship, propaganda, nationalism, and denial of history, the modern totalitarian Chinese state led by the Chinese Communist Party has crafted its own reality where the following must be true:

As I’ve outlined in parentheticals above, there are significant problems with this vision.

Even as an expat, I have felt the 70-hour work-weeks, 90-minute one-way standing commutes, lower salaries, and higher costs of living. In 2013, my 320 sq ft. apartment in the New Territories (a more remote area with lower costs of living than Hong Kong Island) cost 10,000 HKD per month to rent. By 2017, it was being rented for 15,000 HKD. The situation is far worse for most locals, an estimated 20% of whom live in poverty. Continuously increasing overpopulation leads to increased competition for schools, healthcare, housing, work, and even simply space to exist — not to mention the erosion of safety, rule of law, and civil liberties that were supposed to be guaranteed by the “One Country, Two Systems”(OCTS) principle under which Hong Kong was promised 50 years of political and economic sovereignty.

Thanks to an increasingly compromised and lame-duck legislative body and Chief Executive incapable of representing the interests of the general public of Hong Kong (i.e. pushing through the co-location agreement for the rail-link allowing Chinese Public Security to operate under their own jurisdiction on what was Hong Kong soil and the extradition bill), taking to the streets became literally the last option available for those with little to lose and everything to gain. The Hong Kong protests are an inevitable and direct challenge to the CCP fantasy to which modern China has succumbed and which is leveraged by the Chinese State to fuel nationalism and control the diaspora.

The seemingly tone-deaf and heavy-handed responses by the HKSAR government (as well as inaccurate scapegoating of the economy) to the protests makes sense in the context that acknowledging their legitimacy would create a schism in the collective psyches of all who subscribe to the above worldview. After all, how could the Chinese Communist Party be so clearly misgoverning the territory; how could Hongkongers not see themselves as Chinese over all else; and how could they not support the “Chinese Dream” if not being manipulated by shadowy malevolence of “foreigners”?

Acknowledging the remaining concerns of protesters means acknowledging that the world-view and ideology of The Party are not aligned with reality. Thus, the concerted efforts to suppress the protests by the Hong Kong government and Beijing through any means possible ranging from alleged collusion with gangs to outright violence and abuses of power by police against mostly non-violent protesters (e.g. the woman shot in the head at close range and blinded with a bean-bag round).

Beijing’s own ideology has backed themselves into a difficult position: With a lame-duck and colonial-style government incapable of representing the public good, it’s been made crystal-clear that Hong Kong’s current administration lacks the agency, power, and understanding to resolve the situation. Though the bill may now be withdrawn and Lam has made references to dialogue, public trust in the police, Hong Kong government, and (naturally) Beijing is at an all-time low. In many ways a ghost of Article 23, the extradition bill was just the straw that broke the camel’s back.

In Hong Kong, OCTS seems nearly dead and in need of resurrection. In Taiwan (the de-facto island nation Beijing has been courting to accept re-unification under OCTS), even Pro-Chinese nationalist party (Kuomintang) candidate and Kaohsiung mayor Han Kuo-yu was pushed to say that he would accept the policy “over his dead body”.

Carrie Lam may talk about dialogue and act as if she has agency, but her actions up until this point speak far louder than words. Due to the implicit failure of OCTS, the established structure of power puts the ball squarely at the feet of Premier Xi and his cohort. National Day is rapidly approaching, meaning that the Party and its General Secretary feel pushed to resolve the situation before then. They have already conceded to allow the withdrawal of the bill, and it is very hard to imagine the Chinese state making more concessions lightly. On the other hand, it is worryingly easy to imagine the potential for hardline escalation by Beijing when unrest in the territory continues (as it will). Indeed, the Party’s record of attempting to establish “harmony” through desolation, as in the 1989 Tiananmen massacre, weighs heavily on Hongkongers today.

Possible steps forward for the Hong Kong government, Protesters, US, and Beijing

There are two clear-cut first steps for immediate reconciliation by the Hong Kong government that are fairly non-controversial, with the first already on its way to being met: (1) A complete withdrawal of the extradition bill and (2) open investigations into allegations of police misconduct, including the alleged deaths of three protesters on October 31st. By agreeing to take both steps at a minimum, public support for continued protests would be reduced, helping to pacify the region. These are not the only actions the local government needs to take to begin to address the ills that have befallen Hong Kong, however.

To begin to address the rest of the legitimate issues that Hongkongers face, (3) steps must be made to begin to curtail and dismantle the perverse ties and influence that real-estate maintains with the local and central Chinese governments, which has largely led to the present (aforementioned) housing crisis. Additionally, (4) the existing policy of Chinese immigration to the territory via the roughly 130 additional mainlanders given permanent residence in Hong Kong on a daily basis needs to be given a serious second-look in order to reduce the incredible (and ever-increasing) competition for work, school, and living resources that residents of the territory face.

We must also acknowledge the aggressive actions of a small minority of protesters (while noting some are suspected agents provocateurs). It should go without saying that those engaging the police with molotov cocktails or otherwise physically assaulting them risk discrediting the protesters in the court of public opinion. The protesters are at risk of losing sight of their goals by scapegoating the police in lieu of focusing on those who have the power to make meaningful changes to policy in their homeland. Violence against police doing their job (not those engaged in misconduct) is an extremely dangerous and counterproductive game that must be avoided by Hongkongers at any cost, just as violations of guidelines by the police force have deeply wounded the HKPF’s relationship with the populace of which they were sworn to serve. Existing antagonism between Hongkongers and the police force is already at an all-time high due to numerous instances of misconduct. I fear things will become more deadly here as October 1 approaches.

Passing the The Hong Kong Human Rights and Democracy Act (or a similar bill amending the Hong Kong Policy Act of 1992) will do much to help guarantee that appropriate steps are being taken by both the local and central governments. The bill aims to reaffirm general commitment to human rights and the rule of law in Hong Kong through a variety of measures, including (but not limited to): Annually certifying the territory’s autonomy to continue to afford it the special economic status from which it and the mainland benefit, creating a strategy to protect American citizens from extradition to the mainland from Hong Kong, protecting Hong Kong residents from punitive measures (visa denial etc.) taken in reaction to support or participation in protests, and punishing those responsible for extra-legal kidnapping and rendition of Hong Kong booksellers and journalists to China as well as those involved in compromising Hong Kong’s basic freedoms.

As outlined in my arguments above, Beijing is in a very difficult situation entirely of its own creation by being unable to see beyond their ideology and worldview. Despite being largely concerned with face, modern China finds itself losing face and goodwill on an unprecedented scale: The optics of the wielding of nationalism (i.e. the Tseung Kwan O stabbings, pro-Communist threats of violence successfully shutting down peaceful activists overseas), Xinjiang, Tibet, South-China Sea frictions and ecological damage, the disturbing Social Credit System, exploitation and racism in Africa, and various debt traps around the globe are just a few.

How could a state that values external face so highly get to this point? The creation of the Great Firewall not only allows the near absolute control of what information the populace has access to, but it is also equally a tool to give a market advantage to domestic companies providing services that normally would be provided by foreign companies such as Facebook, Alphabet, etc. The downside of the firewall and informational control are becoming more and more apparent as the constructed Chinese world begins to collide with the external.

In the long term, solving the Hong Kong situation without massive casualties and the immeasurable harm of losing the city’s special trade status will require measured yet meaningful reform. In this case, the most pressing reforms are those of (1) allowing true universal suffrage for the territory via eliminating or reforming the central government’s pre-screening all candidates (which seems to have proven disastrous for the semi-autonomous territory so far), (2) re-committing to OCTS and minimal interference in Hong Kong’s political and economic affairs, and (3) allowing Hong Kong greater autonomy over its immigration policies for mainland settlers to help stabilize societal pressures.

Beyond the issue of Hong Kong itself, Beijing needs to introspect on its values and vision for the mainland and the would-be “Greater China” region. I posit that “harmony” through totalitarian control is fool’s gold if China genuinely wants to claim its spot as a respected global superpower. Like many authoritarian movements, the Party seeks to control people because it fears them — and it fears them because it doesn’t understand them. This need for genuine reflection is not China’s alone — many countries and governments will need to do similarly to deal with the existential crises of the 21st century.

Douglas Black is an analyst, writer, lecturer at the Hong Kong University of Science and Technology, and Hongkonger. JPR Status: Opinion.