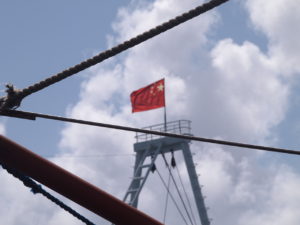 China is cruising toward the finish line in what has become an uncontested race for power in the East Asia-Western Pacific region. There is no question China’s leadership understands that in order to retain the reins of power it must keep pace with the demands of its population, which is the largest in the world. After three decades of at least 10 percent GDP growth, however, the 2010s have proven difficult for China to attain that level of achievement. China’s transition to a consumer-driven economy, moreover, means that China’s growth rates will likely continue to contract as the middle class expands and cheap labor-intensive jobs move elsewhere.

One way China seeks to support its historically high growth rates is by expanding its territory and power-projection capabilities in the South China Sea. This expansion, for example, involves China’s increased naval presence and China’s transformation of half-submerged reefs into artificial islands boasting newly constructed runways in the region. China’s expansion and its professed ownership of 85% of the Sea — including reefs, islands, sand barges, and rocks — conflicts with the historic claims of ownership of such nations as Malaysia, the Philippines, and Vietnam.

In retrospect, China caught the world by surprise when it began building artificial islands in the South China Sea about three years ago. Rich in hydrocarbons and home to some of the world’s most traversed shipping lanes, the South China Sea holds great strategic value. China’s construction of naval harbors and military airstrips on the islands and reefs grant China the ability to project power away from their traditional borders. Possession of these territories also provide for strategic radar sites that offer early warning signals in response to potential attackers entering the South China Sea.

China’s territorial claims have caused shared concerns among the US and EU. The reliance of the US and EU on China for trade and investment, however, has prevented the West from taking a coordinated, tactical stance to rein in China’s island building. To date, the US has attempted to address the situation, albeit with marginal success. These efforts have barely tested China’s resolve, and include the signing of defense pacts with regional partners and sending naval ships into the area to demonstrate freedom of maritime navigation. Regarding the EU, Member States are divided in their interests and rely on other countries, such as China, for economic support. The EU simply cannot afford a threat to its economic stability.

As the race for the South China Sea approaches the finish line, the only way to stymie China’s territorial claims is through a coordinated, tactical stance by the US, EU, and other partners. These allies must make significant sacrifices in order to prevent China’s complete takeover of South China Sea. If China is first to cross the finish line and stakes its claims to the South China Sea, the aftermath will result in even greater economic uncertainty across the world, which neither the US, the EU, or any country can afford.