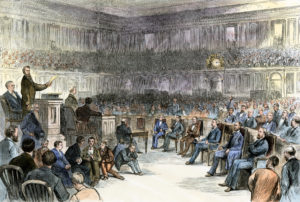 Popular resentment of changes in the economy and of the political elites administering some of those changes is palpable during this year’s presidential campaign.[1]  Public distrust is rife: the electorate views narrow moneyed interests as increasingly driving public policy and the legislative process as broken.[2]  At the same time that American voters are “tired of Washington politicians,”[3] the legacies of Presidents without elected office experience before being sworn into the Oval Office demonstrates the difficulty for outsiders to be effective Presidents.  Numerous academics, such as Arthur Schlesinger, have dedicated decades and thousands of pages to presidential backgrounds and legacies, and every four years the media examines the credentials of prospective and prior Presidents.  This article is a short opinion piece about the shortcomings of past outsider Presidents.  Their flaws ranged from cognitive bias to tolerance of corruption and from excessive use of clandestine plots to lack of political skill.  Only two of the five outsiders–Dwight Eisenhower and Ulysses Grant–were reelected to second terms.

Brief overview of their qualifications

Let’s set aside the our first President George Washington because, by definition, he could not have been a U.S. Vice President, Congressman, or Governor before assuming office.  The remaining Presidents without prior elected office experience are Zachary Taylor, Ulysses Grant, William Howard Taft, Herbert Hoover, and Dwight Eisenhower.

Zachary Taylor, Ulysses Grant, and Dwight Eisenhower were all war heroes.  Their military backgrounds gave them insight into the Commander-in-Chief component of the President’s role.

Although William Howard Taft was not Governor of a U.S. state prior to assuming office, President William McKinley appointed him civilian governor of the Philippines.  In addition, President Theodore Roosevelt appointed him Secretary of War in 1904.  These roles provided Taft with executive branch credentials, although not elected office experience.

Likewise, Hoover served in appointed executive branch roles before winning the presidential election in 1928.  President Woodrow Wilson created the role of U.S. Food Administrator and appointed Hoover to regulate the distribution and consumption of the U.S. army’s and its allies’ food during World War I.[4]   Hoover also was Secretary of Commerce under Presidents Warren Harding and Calvin Coolidge.

Learning on the job

Zachary Taylor (12th President 1849-1850): Insufficient time to research key national issues.  Zachary Taylor was President for only 17 months until his death in July 1850.  The Whig party, the predecessor to the Republican Party, convinced an initially indifferent, if not opposed, Taylor[5] to run for President.  Taylor’s military fame from the Mexican-American War facilitated his electoral victory despite his never having voted in a presidential election.[6]  The American electorate also forgave their war hero for publicly declining to comment during his campaign on fundamental issues, such as the need for a protective tariff or a U.S. bank due to insufficient time to research the subjects.[7]  During his 17-month presidency, Taylor’s cabinet was mired in controversy, and Taylor left multiple key foreign policy decisions entirely to Congress or his cabinet.  These delegated decisions ranged from naval relations with Great Britain to trade with Canada.  Taylor even distanced himself from the details of the Treaty of Guadalupe Hidalgo, which ended the Mexican American War that made Taylor a national hero.  Domestically, Taylor could not heal the sectional divide that ultimately became the Civil War.  His untimely death limits our ability to evaluate his administration.

Ulysses Grant (18th President 1869-1877): Corruption and the failure of Reconstruction.  As a war hero who unified the country, Grant had a promising start to his first term.  He was so popular that he won the election despite reminding voters of his military duties rather than campaigning.[8]  By his final presidential address eight years later, Grant apologized to the nation and lamented his lack of “any previous political training.”  The Grant administration’s positives were championing civil rights for African Americans; skillful mediation of the disputed 1876 presidential election that facilitated a stable transition; and largely peaceful and successful foreign policy.  At the same time, corruption was rife in Grant’s administration.  Grant chose his cabinet based on his confidence in its members’ loyalty, rather than on their competence.  Accordingly, he appointed both family members and previous benefactors.[9]  Although Grant was not corrupt himself, he protected cronies who used their power to pursue illegitimate private gain.  Such dynamics unified Southern Democrats against Republicans and contributed to the failure of Reconstruction.   More broadly, corruption lessened democracy by reducing the political influence of those without the resources to bribe.  Adding to the national disappointment, Grant disposed of millions of acres of public lands to industry and was largely ineffective in his efforts to improve Native American welfare.  Lastly, Grant inadequately responded to the Panic of 1873, which led to a six-year depression.

William Howard Taft (27th President 1909-1913): a very humdrum, uninteresting administration.  Despite being talented enough to be the only American to have served as both President and Chief Justice of the Supreme Court (appointed by President Harding in 1921), Taft’s impact on the nation was limited.  His inability to avert a rift with his predecessor and once great friend Theodore Roosevelt and innocence of the political landmine of word choice with reporters impeded his efficacy.  As an example, to his political detriment, Taft compared himself to a rat in a corner during a speech in the 1912 election.[10]  At the same time, Taft was self-aware: in a letter to his wife, he explained that his was “a very humdrum, uninteresting administration, and it does not attract the attention or enthusiasm of anybody, but after I am out I think that you and I can look back with some pleasure in having done something for the benefit of the public.”  His accomplishments included presidential review of the federal budget–ignored after his presidency and reinstituted by President Harding, setting up a federal bureau to address the issues of child labor, and protecting the civil service.  On the other hand, Taft sought reductions to the tariff, but special interests were too influential in the drafting of the resulting Payne-Aldrich Tariff Act of 1909.[11] Accordingly, the bill ultimately raised certain tariffs on U.S. imports and split the Republican Party.  Other negative aspects of his legacy include multiple Latin American interventions that failed to create peace and unsustainably high pensions for Union Civil War veterans.  Although Taft defeated Roosevelt’s challenge for the Republican nomination in 1912, Roosevelt’s Bull Moose Party split the conservative party.  Taft won only 8 votes in the Electoral College–from Utah and Vermont–and was succeeded by Woodrow Wilson.[12]

Herbert Hoover (31st President 1929-1933): the Great Depression, cognitive bias, and poor media relations.  The Great Crash and the Great Depression dominate Hoover’s legacy.  A closer examination reveals a social activist: Hoover began his term defending civil liberties, fighting racial injustice, reforming prisons, and appointing federal judges based on merit rather than on party affiliation.  The combination of Hoover’s bias for large scale voluntarism and private charity over public sector initiatives; overreliance on the recommendations of conferences and commissions of mostly privately funded specialists, professors, and scientists;[13] poor relationship with the press; and lack of capable supporters in Congress thwarted his policy goals.[14]  Hoover’s response to the Great Depression included public works projects, like the Hoover Dam.  Hoover’s most significant achievement was establishing the Farm Board.  The Farm Board lent to farm cooperatives to stimulate their growth, stabilized prices, and distributed surpluses to the American Red Cross.  Although the Farm Board was unable to prevent the juggernaut of declining prices during the Great Depression, it served  as a template for parts of the New Deal.[15]  Hoover’s response to the Great Depression also included many mistakes, the foremost of which was higher taxes.

Dwight Eisenhower (34th President 1953-1961): overuse of covert operations.  Eisenhower was the most recent President without prior elected office experience.  Largely a successful President, Eisenhower’s legacies include NASA, the Interstate Highway System, and the Defense Advanced Research Projects Agency (DARPA).  DARPA, which invests in breakthrough technologies for national security,[16] in turn made significant contributions to both the Global Positioning System (GPS)’s predecessor and to computer networking.  U.S. economic growth was significant during most of Eisenhower’s two terms.  At the same time, Eisenhower overstepped executive power via excessive use of covert action as a substitute for military engagement.[17]  Although their details were secret from the public for decades, as former Supreme Commander of the Allied forces in Europe, Eisenhower was aware that covert operations were critical to the Allied victory in World War II.  Lacking visibility of their long-term impacts, Eisenhower also viewed covert action as more humanitarian than war.[18]  In addition to his biases from World War II, the ideological alignment of and mutual trust between Eisenhower’s Secretary of State John Foster Dulles and Director of Intelligence Allen Dulles (brothers) facilitated Eisenhower’s excessive use of the CIA.  Eisenhower’s secret foreign interventions included:

These plots hurt U.S. foreign policy in the long run by contributing to the Iranian Revolution, failed states in Guatemala and Congo, the Vietnam War, and wariness of the U.S. in the developing world, inter alia.  In addition to this long-term damage, the secret nature of such plots prevents the American people from having a national conversation about them.  Further, clandestine executive branch foreign interventions subvert the authority that the Constitution gave Congress “to declare War” and “to raise and support Armies”[20] (the power of the purse).  This subversion undermines the separation of powers built into the Constitution.

Personal qualities vs. track record: the Trail of Tears and Watergate

Critics may argue that personal qualities, such as judgment and integrity, are larger drivers of presidential performance than prior elected office experience.  Critics may further point to Presidents Andrew Jackson and Richard Nixon as examples of seasoned elected officials who overstepped the limits of presidential authority.  Jackson and Nixon had served in both the Senate and the House of Representatives.  Nixon had also been Eisenhower’s Vice President.  These backgrounds neither prevented Jackson from disregarding the Supreme Court decision in Worcester v. Georgia (barring Georgia from intruding on Cherokee lands), nor prevented Nixon’s administration from breaking into the Democratic National Committee headquarters.

At the same time, seasoned politicians overstepping the limits of presidential powers do not negate the challenges facing an outsider seeking the most powerful political office in the world.  As war heroes, Zachary Taylor, Ulysses Grant, and Dwight Eisenhower all had expertise in the Commander-in-Chief component of the President’s role.  As executive branch apparatchiks, William Howard Taft and Herbert Hoover had political backgrounds.  Popular resentment of the political elite notwithstanding, as an electorate, we should consider how lack of elected office experience led these five former Presidents to contribute to what became intractable national problems.

Remembering our past should limit the likelihood of repeating problematic chapters in our history.  A President without any military or political credentials would be unprecedented.  The slope of such a President’s learning curve may prove insurmountable on both a personal and a national level.

Bhakti Mirchandani is a Senior Vice President at an alternative investment management firm.  Most recently, Bhakti served as Global Relationship Director at Barclays for multilaterals, non-profits, and government agencies focused on international development.  Previously, Bhakti was a Vice President at Unitus Capital, a firm that seeks to open global capital markets for the poor, and worked in corporate strategy and investment management at Barclays Capital/Lehman Brothers, where she was also the firm’s microfinance specialist.  Bhakti co-founded the Global Microentrepreneurship Awards (later Citi Microentrepreneurship Awards) for which the UN presented her with an innovation award.  She was a consultant to Women’s World Banking, and worked in homebuilding equity research at Salomon Smith Barney.  Bhakti holds a BA from Harvard College, an MPA from the Harvard Kennedy School, and an MBA from Harvard Business School, where she received the Dean’s Award.  Bhakti is a Term Member at the Council on Foreign Relations, a Member of the Economic Club of New York, Treasurer and Board Member of Arc Finance, and an Advisor to Upaya Social Ventures.

[19] Ray Takeyh, “What Really Happened in Iran: The CIA, the Ouster of Mosaddeq, and the Restoration of the Shah,” Foreign Affairs.  July/August 2014.  Page 12.