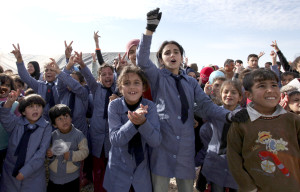 Syrian refugee students wave to welcome United Nations Secretary-General Ban Ki-moon, unseen, to Zaatari Syrian refugee camp, in Mafraq, Jordan, near the Syrian border, Saturday, Dec. 7, 2012. U.N. Secretary-General Ban Ki-Moon on Friday called on the Syrian government to “stop the violence in the name of humanity”, during a visit to the Zaatari refugee camp in Jordan, close to the Syrian border. (AP Photo/Mohammad Hannon)

As the war in Syria hit its five-year mark this past Tuesday, the European strategy for managing the nearly 1 million Syrian refugees[1] seeking asylum in Europe is not working.  While most of the refugees that arrived in Europe in 2015 left Syria last year, others are leaving countries of first asylum Jordan, Turkey, and Lebanon for Europe after years of hardship.[2]  By way of background, first asylum countries are those that allow refugees to enter their territory for temporary asylum while waiting for resettlement or repatriation.  The European Commission is hoping that another deal with Turkey and stronger Schengen Area external border controls will tackle the biggest European refugee crisis since World War II.  As long as Syrian refugees lack the assistance they need in Syria and countries of first asylum, they will continue to make perilous journeys to Europe[3] on unseaworthy boats.[4]  While the EU and Turkey negotiate a controversial refugee exchange program and the European Commission weighs the establishment of a “European Border and Coast Guard” with a larger budget and more authority than current EU management agency Frontex,[5]  the US should fund financially sustainable relief and development to Jordan in parallel with its extensive humanitarian and military aid.  Jordan’s commitment to peace and moderation in the Middle East and cooperation with the US on security matters and counterterrorism make it a vital US ally.

Syrian refugees in Jordan need steady and sufficient income.  More than 85% of Syrians in Jordan are living below the national poverty line of $3.20 per day.[6]  Given the heavy expense of maintaining a mostly open border to accept Syrian and other refugees, Jordan has limited resources to eliminate the poverty of its Syrian refugee population.  Unemployment among 15-to-24 year-old Jordanians is 28.8%,[7] reflecting Jordan’s inability to fully meet its citizens’ employment needs, let alone those of the over 2 million Palestinian refugees[8] and 638,000[9] Syrian refugees who live in Jordan.[10]  Aid flows, such as the United Nations World Food Programme (WFP)’s e-vouchers, have fluctuated with the level of donations—at times being suspended due to insufficient funding.[11]  WFP’s e-vouchers are delivered via text message to mobile phones and can be redeemed for food.  Accordingly, the US should assist Jordan by delivering microfinance for Jordan-based Syrian refugees and addressing inefficiencies in humanitarian aid for Jordan-based Syrian refugees.  Key areas of assistance include the following.

Provide financing to development and aid organizations with offices in Jordan and experience offering microfinance to refugee communities.  The funding should be used to pilot microfinance products and programs for Jordan-based Syrian refugees.  This should drive financial inclusion and asset building among Syrian refugees without crowding out native Jordanian or Palestinian microentrepreneurs.  Specifically, (i) any microloans would include a business training component and be (ii) primarily disbursed to refugees with business experience and a share of the capital; (iii) the range of products would include savings or insurance, potentially with an aid agency paying the initial premium; and (iv) the organizations involved in the pilot should measure and report on the results.  Given that approximately 80%[12] of Syrian refugees have left refugee camps to illegally settle in Jordan’s crowded cities, the products may gain traction among the Jordanian people if they were offered in refugee camps only to refugee camp residents.  Ideally, some of the microfinance institutions targeted for investment would offer Sharia-compliant products.  At the same time, since Sharia-compliant products can be more costly and less flexible, they should be only part of the solution. The microfinance clients would ideally build sustainable businesses that would reduce their dependence on humanitarian aid.

Fund financially sustainable solutions to humanitarian aid inefficiencies.  There are several such examples.  First, UNICEF’s Bridge Fund accelerates UNICEF’s life-saving work by providing UNICEF’s Supply Division with flexible capital during the inevitable delay between donors committing support and UNICEF’s receipt of pledged cash.  The flexible capital would be repaid and reinvested when donors (primarily multi-laterals, like the World Bank, and allied governments), honor their humanitarian pledges.  Meanwhile, UNICEF both avoids the greater cost of air (faster) vs. sea (slower) transportation of aid and abides by United Nations limitations on incurring debt.  Second, using the higher multilateral humanitarian aid agency credit ratings to provide trade finance to suppliers of multilateral humanitarian aid agencies, rather than using the credit ratings of the suppliers themselves, could reduce the financing costs of delivering aid.  The US may wish to invest in these or other solutions that reduce the costs of delivering aid, allowing for more aid per grant dollar.  Because such solutions would increase the efficiency, but not the aggregate value, of government pledges, any increases to the dependency of the Jordanian government on aid would be limited.  With the Bank of Japan and the European Central Bank setting negative interest rates and with the substantial fall in global asset prices this year, the below-market returns on such solutions should be more palatable to the US taxpayer.

Unnecessary and Too Late

Critics may call this strategy an unnecessary addition to current aid flows and too late in light of this week’s start to the U.N.-brokered Syrian peace process.

Building on the foundation of Jordan’s non-ideological and moderate political culture, the Obama administration has strengthened Jordan against the destabilizing impact of civil wars in its neighbors Iraq and Syria.[13]  The administration’s efforts include both a State Department commitment last February to provide Jordan with $1 billion annually to house refugees from Iraq and Syria and fight ISIS and last month’s commitment of over $290 million in US development assistance for education in Jordan and Lebanon.  At the same time, despite these and other substantial aid flows, at approximately 10% of the total Jordanian population prior to the Syrian civil war,[14] the size of the Syrian refugee population significantly strains the Jordanian economy.  It would also behoove the US to help Jordan avoid an analogous low-level civil war to the one that the spillover from Syria and Iraq generated in Turkey.[15]

Funding microfinance and solutions to humanitarian aid inefficiencies is geared to be financially sustainable and relatively low cost.  The sustainability should limit economic distortions.  Leveraging existing multilateral and local infrastructure drives down cost.  Specifically, its potential cost of less than 0.25% of $37.9 billion that the US plans to spend in foreign aid in 2016[16] is attractive when compared to that of other military or political options.    The US has a long history of financially sustainable economic statecraft, or using economic tools to achieve strategic interests, from the Export-Import Bank loans alongside the Marshall Plan after World War II to the American Enterprise Funds in central and eastern Europe following the fall of the Soviet Union.[17]

The nascent Syrian peace talks would ideally permanently solve the Syrian refugee crisis.  Until a lasting peace, the US should mitigate the suffering of Jordan-based Syrian refugees and ensure ongoing Jordanian stability through financially sustainable relief and development.  This approach strategy may even restore Europe’s control over its external border and refugee inflow.

Bhakti Mirchandani is a Senior Vice President at an alternative investment management firm.  Most recently, Bhakti served as Global Relationship Director at Barclays for multilaterals, non-profits, and government agencies focused on international development.  Previously, Bhakti was a Vice President at Unitus Capital, a firm that seeks to open global capital markets for the poor, and worked in corporate strategy and investment management at Barclays Capital/Lehman Brothers, where she was also the firm’s microfinance specialist.  Bhakti co-founded the Global Microentrepreneurship Awards (later Citi Microentrepreneurship Awards) for which the UN presented her with an innovation award.  She was a consultant to Women’s World Banking, and worked in homebuilding equity research at Salomon Smith Barney.  Bhakti holds a BA from Harvard College, an MPA from the Harvard Kennedy School, and an MBA from Harvard Business School, where she received the Dean’s Award.  Bhakti is a Term Member at the Council on Foreign Relations, a Member of the Economic Club of New York, Treasurer and Board Member of Arc Finance, and an Advisor to Upaya Social Ventures.