Below is the speech delivered by H.E. Ambassador Katalin Bogyay, Permanent Representative of Hungary to the UN in New York City on 20th October, 2015 at the Reception on the occasion of the commemoration of the 23 October, 1956 revolution. 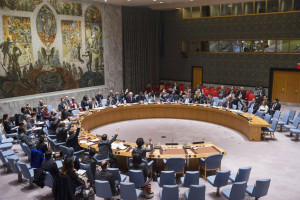 In the music of Egmont overture, Op. 84. Ludwig van Beethoven, one of the greatest composers of mankind expressed his own political concerns through the exaltation of the heroic sacrifice of a man condemned to death for having taken a valiant stand against oppression. It was composed during the period of the Napoleonic Wars, at a time when the French Empire had extended its domination over most of Europe.

The subject of the music and dramatic narrative is the life and heroism of a 16th-century Dutch nobleman, the Count of Egmont.

The Overture became an unofficial anthem of the 1956 Hungarian revolution.

The Secretary-General of NATO, that time, called the Hungarian revolt “the collective suicide of a whole people”.
This is what we remember on our national day exactly on the 23d of October.Sándor Márai, world renowned Hungarian novelist and playwright, who fled Hungary because of disagreeing with the oppression of both the fascist and communist regimes, committed suicide  in 1989  here in the US, just before we became finally free.

After the crush of the revolution at Christmas time of 1956 he wrote a poem titled Herald Angel. Let me just quote only two stanza of it!

“The world speaks of a wonder, true,
the clerics clack of courage too.
Statesmen mention these words, finessing,
His Holiness too, gives his blessing,
and all sorts of people try to guess
what was the purpose of this mess?
Why did those men have to disobey?
Why didn’t they simply pass away?
Why was the sky suddenly rent?
A nation spoke up: “This is the end!”

The people just gaze there, mystified.
What drives this ocean’s almighty tide?
Why has the cosmos run a-riot?
A nation rose. Then all was quiet.
But people ask: What was it we saw?
Whose flesh and bones have changed there the law?
People born free in their native land
falter because they can’t understand
the fact that we will always recall:
Freedom is the greatest gift of all.”

Thank you for sharing our remembrance on our national day.

In 1956 it was a spontaneous nationwide revolt against communist dictatorship, the government of the Hungarian People’s Republic and its Soviet-imposed policies, lasting only from 23 October until 10 November 1956.

Despite the failure of the uprising, it was highly influential in changing the world order of the cold war years.

It is a less known that the other historic event we celebrate on the 23rd of October is the very day of 1989, the eventual completion of the goals and dreams of the 1956 Revolution. In 1989 on 23rd of October, 26 years ago, the new Republic of Hungary was proclaimed.

Our 1956 revolution has a very special relationship with the United Nations, which Hungary entered 60 years ago.

On the 4th of November 1956, when it became clear that the revolution will be crushed by the Soviet military forces , the renowned Hungarian lawyer and political theorist, István Bibó, then Minister of State in the revolutionary Government of Imre Nagy, decided to stay in the Parliament building “as the only representative of the existing legal Hungarian government”. He wrote a proclamation entitled “For Freedom and Truth”, in which he turned to the UN and the international community for assistance.

Let me quote of few of Bibó’s sentences:

“The Hungarian people have already sacrificed enough of their blood to show the world their devotion to freedom and truth. Now it is up to the world powers to demonstrate the force of the principles embodied in the United Nations Charter and the strength of the world’s freedom-loving peoples. I appeal to the major powers and the United Nations to make a wise and courageous decision to protect the freedom of our subjugated Nation.”

As you probably all know, despite Bibó’s powerful plea for help, the UN was unable to take timely and decisive action that would have been necessary to ensure our country’s freedom.

While the Security Council was unable to act, the General Assembly adopted a number of resolutions in 1956, which unfortunately had no real effect on the actual course of events.

Nevertheless, it was precisely the relentless disregard for the resolutions that finally induced the General Assembly to establish a Special Committee to study the Hungarian problem.

Over 100 refugees were interviewed including ministers, military commanders and other officials ,workers, revolutionary council members, factory managers and technicians, Communists and non-Communists, students, writers, teachers, medical personnel, and Hungarian soldiers. Documents, newspapers, radio transcripts, photos, film footage, and other records from Hungary were also reviewed, as well as written testimony of about 200 other Hungarians.

The Special Committee established to study the Hungarian problem has operated for several years and produced two impressive reports.

While the first one focused on explaining the causes that had led to the outbreak of the revolution and outlining the events that had actually taken place, the second, complementary report, reviewed the period of retaliation, which followed the crushing of the revolution.

The chairman of the Committee was Alsing Andersen, a Danish politician who entered Denmark’s UN delegation in 1948.

The chief secretary of the Committee was Povl Bang-Jensen, a former Danish diplomat, who –refused to share the names of the secret witnesses in order to protect them and their families from any possible retaliation.

For his courageous action Povl Bang-Jensen has been considered in Hungary a real hero.

The UN still keeps classified documents, which contain relevant mosaics about its activities in relation to the Hungarian revolution of 1956. On the occasion of the upcoming 60th anniversary, next year 2016, we requested the declassification of these files and making them available for scientific research.

It is actually important to know that the killing of political prisoners continued till 1963, when finally a mass amnesty was introduced in Hungary in exchange for the removal of the Hungarian question from the agenda of the UN and the international recognition of the Kádár Government in the UN.

This year when we mark the 60th anniversary of the membership of Hungary in the UN, we want to stress our commitment to the attempt of the international community in order to achieve peace in every region of the world.

We can see that despite all of the significant results and robust efforts made by the international community to have peace all over the globe, rising number and dynamics of the conflicts can be seen in several regions of the world. We believe that the UN has a unique, unquestionable role in maintaining peace all over the world.

This year when we mark the 60th anniversary of the membership of Hungary in the UN, Hungary also took over the Chairmanship of the International Holocaust Remembrance Alliance (IHRA). The goal of the organization is to prevent the re-emergence of genocide through education, remembrance and research, to ensure that present and future generations learn the lessons.

Throughout our year-long Chairmanship, we work actively to increase the visibility of the Alliance through a series of events worldwide, concentrating also on The Roma Holocaust, or “Pharrajimos”, which has for long unfairly faded from our shared memory. This is the exhibition you can see on our walls here in the Béla Bartók Hall.

Béla Bartók was a real UN person even before UN was founded.

“My guiding philosophy has always been the ideal of different nations uniting into brotherhood, in spite of all the wars and hostility. I have tried to serve the aims of this idea, as best as I can, in my music, so for that reason, I do not shrink away from any influence, be it Slovak, Romanian, Arab or any other source.”

I believe that we should take the cultural diversity of the United Nations not as a burden but as a source of inspiration.