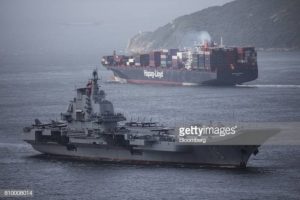 What a Chinese victory at the WTO would do is “allow” Beijing to impose retaliatory tariffs, something Beijing is already doing. So at this moment, China is itself in violation of WTO rules by taking action without permission. Getting a favorable WTO verdict would give Beijing legitimacy, which means a lot to a regime conducting a revisionist foreign policy from the South China Sea to Africa and the Middle East, and which has declared the goal of surpassing the U.S. economy in size and capabilities by 2030.

The U.S. case is not about the overall trade deficit in goods ($375 billion last year). That will require the larger, broader measures President Trump has proposed, including the $200 billion in new tariffs announced September 17. These new tariffs are also based on Section 301 findings of “numerous unfair policies and practices relating to United States technology and intellectual property – such as forcing United States companies to transfer technology to Chinese counterparts.”

These Section 301 cases strike at the core of China’s attempt to close the technology gap with the U.S. to affect the international balance of power. As the USTR’s 2017 report on China’s WTO compliance stated, “Over the past five years, despite Chinese pronouncements to the contrary, the state’s role in the economy has increased.” This coincides with President Xi Jinping’s consolidation of power and pursuit of his “China Dream” of global preeminence. A more aggressive foreign policy and accelerated military buildup have shifted the PRC from a rival to an adversary (a term used in the latest Defense Department report on China). The massive amounts of capital and technology that have flowed across the Pacific have empowered and emboldened the communist regime. As the Pentagon’s China report notes, “To support [military] modernization, China uses a variety of methods to acquire foreign military and dual use technologies, including targeted foreign direct investment, cyber theft, and exploitation of private Chinese nationals’ access to these technologies.” This fits with the USTR report.

It would thus be valid to use Article XXI of the General Agreement on Tariffs and Trade (GATT, the foundation of the WTO) to deny China access to the WTO’s dispute mechanism. It exempts from challenge “any contracting party from taking any action which it considers necessary for the protection of its essential security interests.” Every major trade agreement contains this kind of exception, but there have been attempts by “globalists” to place restrictions on what can be defined as a security concern and even allow foreign judges to decide if invoking the exception is “valid.” The U.S. has always held that dispute panels are precluded from examining the motives for the use of security exemptions. For example, when this issue came up in regard to the OECD Shipbuilding Agreement in 1998, the House Armed Services Committee presented an amendment to the implementation legislation stating that “Nothing in the Shipbuilding Agreement shall be construed to prevent the United States from taking any action which the United States considers necessary for the protection of essential security interests.” The amendment was adopted by an overwhelming bi-partisan majority (Sec. 120 (a)). A national government must remain the sole judge of what constitutes a threat to its security. Any weakening of this right would undermine sovereignty at its most central point.

On September 13, China applied to the WTO for permission to impose $7 billion in tariffs on U.S. exports because of non-compliance with a WTO ruling against the use by Washington of its anti-dumping law against 13 imported Chinese products including machinery, electronics, and light industry. The U.S. lost both the original case and its appeal. This request to impose sanctions may be considered a shot across the American bow, as this is the first time Beijing has gone this route in a trade dispute. But it also demonstrates the weakness of the WTO system.

The Chinese brought their case to the WTO in 2016. The Obama administration did not block the action. The process ran its course, taking two years to reach the stage where retaliation could be authorized by the WTO. The time and effort devoted to a lengthy and indeterminate course of action seems geared to making the settlement procedure irrelevant to the needs of the threatened party. More rapid action is required to save industries menaced by foreign rivals. This has undoubtedly played a role in the decision of the Trump administration to use the Section 301 mechanism rather than file its own WTO case against China, even though joint action with Japan and the European Union at the WTO had been discussed earlier in the year.

President Trump has repeatedly suggested that the U.S. should pull completely out of the WTO. That would be a controversial decision that could trigger more trouble than the action is worth given that there is a better alternative: just ignore the WTO. Archives around the world are filled with treaties and other documents that are no longer of interest to anyone other than a historian because time and events pass them by. The use of the GATT’s own language to neuter the WTO in an important case would be the start of such an evolution to extinction of the WTO’s worst feature and the reestablishment of negotiations between sovereign nations as the basis of international economics, which was the original basis of GATT.

The Trump Administration had laid sufficient groundwork to justify Article XXI. There is no doubt that Beijing has used extorted and stolen technology to strengthen the military threat it now poses to the United States and its allies. However, the Trump administration may not want to explicitly make trade a national security issue, though its officials are acting upon that understanding. It may be more politically appealing to talk about job creation than a new Cold War. If so, there is another exception that can be employed.

GATT Article XX states “nothing in this Agreement shall be construed to prevent the adoption or enforcement by any contracting party of measures….[for] the protection of patents, trade marks and copyrights, and the prevention of deceptive practices.” This exception fits the more narrow particulars of the Section 301 cases.

However, as broader and more substantial tariffs and other restrictions are imposed on Chinese trade and investment, it will become apparent that President Trump is trying to change the strategic nature of U.S.-Chinese relations. Beijing will retaliate in some manner, but Washington can close the door at the WTO by invoking Article XXI.

The U.S. should not shrink from denying WTO jurisdiction in trade disputes. As President George W. Bush said in a different context involving the UN, “America will never seek a permission slip to defend the security of our people.” And security, both economic and military, is at the heart of the US-China trade war.