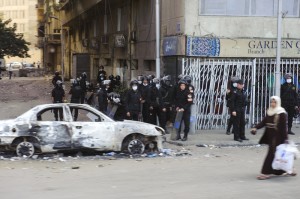 A muslim mob attacked the seat of Egypt’s Coptic Orthodox Church on Sunday, resulting in Christian-Muslim riots and an anti-government outburst by the Coptic Pope yesterday (WSJ).

This religious strife significantly increases the probability of additional attacks on Christians, greater cohesion between Muslim factions, and domestic consolidation of President Morsi’s Islamist administration and Muslim Brotherhood power-base. President Morsi is doing badly in Egyptian opinion polls, and a new Christian scapegoat could distract the population from blaming him for Egypt’s crisis. The Pope’s outburst got international attention, but was probably a domestic mistake in that it increased the likelihood that Muslim Egyptians will target the minority as an enemy of Islam and the Egyptian state. Regardless of whether anti-Christian riots will improve President Morsi’s public ratings, it will be difficult for him to restrain Muslim militants who support him.

Christian Egyptians are now in an extraordinarily precarious position. Expect moderate numbers of Christian political refugees emigrating from Egypt over the next few months, with far greater refugee outflows if religious strife continues.  There are approximately nine million Christians in Egypt who are at risk of becoming refugees. Based on economic ties, preferred destinations will be Italy, the United States, Spain, France, and Germany.