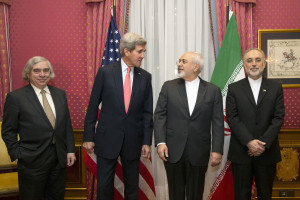 U.S. Energy Secretary Ernest Moniz, U.S. Secretary of State John Kerry, Iran’s Foreign Minister Mohammad Javad Zarif and the head of the Atomic Energy Organization of Iran Ali Akbar Salehi, from left to right, pose for a photograph before resuming talks over Iran’s nuclear program in Lausanne, Switzerland, Monday, March 16, 2015. The United States and Iran are plunging back into negotiations in a bid to end a decades-long standoff that has raised the specter of an Iranian nuclear arsenal, a new atomic arms race in the Middle East and even a U.S. or Israeli military intervention. (AP Photo/Brian Snyder, Pool)

Iran is seeking to remove all binding United Nations sanctions, according to an official interviewed by the Journal of Political Risk on Monday. The official said that Iran has offered to leave the non-binding UN sanctions in place. “As the P5+1 and Iran race to meet the March deadline for a political framework agreement on Iran’s nuclear program,” said the official, “one of the main obstacles is how to lift United Nations Security Council sanctions imposed on Iran.” According to the official, “Iran has insisted that those measures set out in the four resolutions adopted by the Security Council from 2006 to 2010 should be lifted, especially those provisions seen as legally binding for Member States under Chapter VII of the UN Charter.”

The official requested anonymity because of the sensitive nature of the information. The United States Department of State and the Iranian Embassy in London did not reply to requests for comment. The Journal of Political Risk was unable to verify claims by the official.

In 2006, the United Nations Security Council passed Resolution 1696, in which states are obligated “to exercise vigilance and prevent the transfer of any items, materials, goods and technology that could contribute to Iran’s enrichment-related and reprocessing activities and ballistic missile programmes…”. Also in 2006, the Security Council passed Resolution 1737. This latter resolution required that “all States shall take the necessary measures to prevent the supply, sale or transfer directly or indirectly from their territories, or by their nationals or using their flag vessels or aircraft to, or for the use in or benefit of, Iran, and whether or not originating in their territories, of all items, materials, goods and technology which could contribute to Iran’s enrichment-related, reprocessing or heavy water-related activities, or to the development of nuclear weapon delivery systems…”.[1]

Current negotiations between Iran and the P5+1 (United States, United Kingdom, France, Russia, China, and Germany) are aimed at removing all UN and member-country sanctions on Iran in exchange for Iran’s agreement to slow or halt its nuclear program. Critics of the developing agreement claim that Iran is refusing to provide full verification of its commitments under the proposed agreement, and that the agreement would lead to a “10-year glidepath” to an Iranian nuclear bomb, and regional nuclear proliferation to Saudi Arabia and perhaps Turkey. Supporters of the agreement point out that the sanctions have not stopped Iran from progressing towards a nuclear weapon, and that the sanctions unfairly weigh on the civilian population of the country. According to polls, Iranian citizens overwhelmingly support a negotiated deal to lift the sanctions. There is less public support in the P5+1 countries.