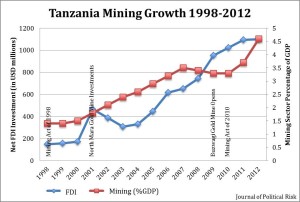 Long considered an anchor of East African stability, Tanzania has recently made headlines for aggressive expansion of its mining and extractive industries. In what might be considered growing pains, economic prosperity has strained government and civilian relations, and is increasingly testing the governance skills of Tanzania’s Ministries. Adverse investment laws, widening religious conflict, and proliferation of small arms and light weapons, however, tarnish Tanzania’s image as a peaceful and prosperous republic.

2001 North Mara Gold Mine preproduction,  construction, and other investment.

2009  Buzwagi Gold Mine opens, the second-largest gold mine in Tanzania. Construction cost is approximately $400 million, leading to an increase in the FDI metric for 2009.

2010  GoT passes the Mining Act of 2010 in April, increasing royalties on minerals and increasing the ownership share of the government and Tanzanians in new extractive endeavors.  The royalty on gold increases from 3% to 4%. These royalty rates are on par with most other African nations in the region.[1] However, along with years of government criticism of the mining industry leading to the new laws, the increased imposts and strictures dampen investment. FDI continues to increase after 2010, but at a slower rate than prior to the Mining Act of 2010. The mean annual increase in FDI drops from 73 million USD between 1998 and 2010, to approximately 39 million USD between 2010 and 2012.

2013  In May, GoT announced it will auction eight oil and gas exploration blocks (one additional offshore block added in July, bringing the total to nine). Tanzania has the reserves to become the third-largest producer of natural gas in the world.

Tanzania’s mining and extractive industries are currently a small-scale endeavor, yet they account for an outsized percentage of Tanzania’s export revenue. While traditional export commodities – gold, diamonds, graphite, and cement – remain staples of the export industry, Tanzania’s government is aggressively pursuing exploitation of its vast mineral reserves. In its economic roadmap, Vision 2025, Tanzania aims to increase the nascent mining industry’s share of GDP to 10% by 2025 from 4.5% in 2012. While traditional export commodities (in particular, gold and diamonds) remain staples of Tanzania’s export industry, newcomer exports of coal,[2] uranium, and nickel represent significant potential for growth over the next ten years. The Tanzanian government has made large-scale efforts to expand the mining industry, such as the recent certification of Tanzania’s first uranium mine.

The most substantial potential future driver of national wealth is natural gas. Possessing an estimated 28.7 trillion cubic feet of natural gas in proven off-shore and inland recoverable natural gas reserves, Tanzania has the natural resources to become the third-largest producer and exporter of natural gas in the world.[3] The government’s recent decision to auction eight oil and natural gas exploration blocks (seven off-shore) affirms their dedication to expansion. Production of copper, gypsum, kaolin, silver, and garnet have also all significantly increased in the past three years.

The expansion of extractive industries will bring wealth surpluses and foreign direct investment (FDI) to the country in the next 10 years. However, expect some social friction to result. Traditional issues related to heavy extraction economies already threaten good governance in Tanzania. Rent-seeking behavior, apathy to limiting corruption, and short-term decision-making have sabotaged past initiatives. Recent allegations of illegal mining contracts and a lack of transparency in the industry have angered voters. Despite increasing taxes and strictures on foreign mining in the Mining Acts of 1998 and 2010, the Tanzanian media continues to voice views that taxation of mining industries is lax. This raises the public’s concern that ‘trickle down wealth’ from mining operations and FDI will not materialize for the general population. Protests at extraction sites, including the massive North Mara gold mine as recently as March 2013,[4] and spontaneous riots of thousands following the announcement of new extraction licensing, have repeatedly erupted across the nation over the past two years. Public concern poses a threat to current and future mining investments, and should be monitored.

Tanzania’s GDP is expected to expand 7% annually through 2015.[5] Rapid growth often strains the incumbent political and social clientelist systems of developing countries, and Tanzania is no exception. Additionally, Tanzania faces several unique systemic and geographically destabilizing factors.  Tanzania has never developed into the ethno-centric political and patrimonial system common in many sub-Saharan developing countries, a legacy of the socialist system implemented following independence. However, elections are increasingly influenced by religious affiliation and dogmatism. Furthermore, a police force lacking the necessary technical skills and professionalism to serve the general public is having difficulty effectively countering the growing and concerted domestic terrorist threats. Nor are the police effectively addressing the proliferation of small arms and light weapons in the country.

Although domestic terrorists currently have limited capacity to inflict major damage or mass casualties, the improvised explosive device used in the recent Arusha Church bombings was competently constructed and more effective than previous domestic terror attacks.[6]Insecure neighbors and regional terrorist groups looking for a foothold in the region – notably al Shabaab of Somalia and al Qaeda East Africa – create a situation where ambitious domestic terrorist groups like Jumuiya ya Taasisi za Kiislam (Community of Muslim Organisations) may find technical and financial support available to increase the scope, direction, and efficacy of their terrorism.

Widespread denunciation of the Arusha bombings emanated from both the ruling, largely Christian, Chama Cha Mapinduzi (CCM) Party, and the predominantly Muslim opposition party, the Civic United Front. However, unrest in Mbeya, Dar es Salaam, Zanzibar, and Mwanza in 2013 affirms the steady increase in sectarian strife between religious populations over the past decade. Chadema is a more aggressive opposition party, historically accused of holding inflammatory pro-Christian biases. It is growing in strength.[7] Semi-regular skirmishes at Chadema political gatherings have highlighted an increasingly pugilistic political tone.[8]

Potential investors should monitor the growing strength of Chadema. Expanded party power and a more significant national role for Chadema could further aggravate an already tense religious and socio-political situation, and cause more rapid destabilization. If Chadema mounts a serious challenge to the ruling CCM party in the 2015 elections, CCM might be further incentivized to raise taxes and registration costs to moderate Chadema criticism, leveled at the current government, that Tanzania is not benefitting enough from resource extraction.

Realistically, further unrest will probably lead to increased protection and militarization of extraction sites, highlighting inequalities and exacerbating tensions. Despite general political will to downplay recent terror acts, these are growing in competency. Expanded exploitation of Tanzania’s massive natural resource reserves will strain the government’s abilities to manage new-found wealth, avoid corruption, and incorporate all levels of citizenry in economic growth. While such potential destabilization and increased terror will not prevent the growth of Tanzanian extractive industries, they will certainly slow such growth and will have serious financial implications for companies looking to invest in the country.  Such protests have also led to increasing discussions about again raising tax levels on extraction industries, such as mining. Higher taxes have already been levied on gold mining[9] and there are growing discussions in 2013 about increasing the applicability and breadth of such levies.[10] If such tax increases occur this could make the Tanzanian market, at least temporarily, less attractive for investors.

Current and potential investors in extractive industries in Tanzania should consider potential tax rises, and should monitor growing levels of instability before and after committing large-scale resources to the country. Although unrest and discontent are unlikely to prevent the extraction of resources in Tanzania, they will necessitate increased security for personnel and equipment. The industry should consider the lessons learned by extractive companies in countries such as Nigeria when planning increased operations in Tanzania. Disruption to services can cost companies huge amounts of revenue and private security forces are both expensive and only partially successful in mitigating threats. While disruption in Tanzania may not be on the same level as in Nigeria, extractive industries in Tanzania can heed the lessons of Nigeria and design comprehensive population-focused conflict mitigation plans before increased extraction. Companies should consider conflict-mapping exercises before large-scale investment to assess the potential key drivers of conflict within the local population. After mapping potential causes of instability, community outreach programs should be considered for public relations purposes. If implemented, such programs will show that the company and government are addressing critical factors of concern to the communities among which they work. This may help stabilize the communities and substantially increase the probability of project success.

Ilan Cooper and Nathan Stevens work for Development Transformations (DT) in Washington, DC. Mr. Cooper works on DT’s stabilization programming and provides support on programs in Africa.  Previously, Mr. Cooper worked at the Berkley Center for Religion, Peace, and World Affairs at Georgetown University, where he conducted research on the role of local transitional justice mechanisms in sub-Saharan Africa, with a particular focus on the South African Development Community (SADC) countries. Mr. Cooper graduated with honors from Georgetown University with a Master’s in Conflict Resolution. He also holds a Master’s in International Relations, with distinction, from the University of Chicago and a Bachelor’s, with distinction, in War Studies from King’s College London. Mr. Stevens served as a Legislative Correspondent in the office of Senator Carl Levin, and through internships with the Africa Center for Strategic Studies and the Senate Foreign Relations Committee, Mr. Stevens has focused on security sector reform and political decentralization in sub-Saharan Africa, emerging narco-states in West Africa, and the destabilizing effects of terrorism in the Sahel. Mr. Stevens graduated from Yale University with a B.A. in Political Science.