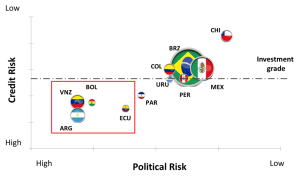 The latest events in Latin America and the Caribbean provide good examples of the current political and economic tone in the region. On one hand, small and mid-sized economies such as Peru, Colombia, Chile and Mexico are working towards the advancement of the Pacific Alliance – an economic group whose agenda includes free trade and economic integration. On the other hand, a group of not-so-small economies still linger with populist recipes for government intervention, nationalization of companies, and manipulation of published government economic data.

The Pacific Alliance, an economic bloc which has a clear orientation towards Asia, is a market-oriented response to Mercosur (an economic and political agreement with several internal conflicts over trade policy). The Alliance is formed by Chile, Colombia, Mexico and Peru. Under the surprising presidency of Ollanta Humala, Peru has advocated free-market policies. From a political risk perspective, there has been no clear evidence that the Pacific Alliance adds risk of adverse government laws or actions such as regulations, protectionism, profit repatriation restrictions, expropriation, or nationalization. On the contrary, the Pacific Alliance has worked to provide a positive business climate among Alliance members because it is focused on trade, investment and immigration rather than politics and ideology. For example: Mexico has dropped visa requirements for Colombians and Peruvians; the four Alliance countries signed an agreement removing tariffs on 90% of their merchandise trade; and the stock market of Chile, Peru and Colombia have merged to create MILA (Mercado Integrado Latinoamericano).

On the other hand, the same cannot be said of Argentina, Ecuador, Venezuela and Bolivia, which in some degree or another have scared foreign investors with populist-oriented policies. Countries of this league have shown more political turmoil than stability or economic growth. Political risks in this group are complicated, but are typified by political unease and food shortages in Venezuela, nationalization of assets in Argentina and Bolivia, restrictions of media groups in Argentina and Ecuador, and manipulation of the inflation index in Argentina.

Regarding political risks, Brazil has a relatively neutral status, which is good for both for the region and the country itself. The country supports a market orientation and political stability in Latin America, and avoids the populism of the late Hugo Chavez. However, the country’s missing opportunity comes from the economic side of the equation, not only due to the lack of managerial capabilities in the Federal Government but also to the congenital inability to attract foreign investment through a competitive business environment. In addition, a rise in inflation has diminished public support to President Dilma Rousseff, although it is likely to remain above 50% in the foreseeable future. Brazil has been a force for political stability in the region, although only the size of its economy, not its appetite for growth, has helped economic growth and reduction of economic inequality.

The graphic above compares political risk and credit risk of the major economies in Latin America and the Caribbean (Brazil, Mexico, Argentina, Venezuela, Colombia, Ecuador, Uruguay, Bolivia and Paraguay). The size of the national flag of each country represents the size of each country’s economy based on data from the International Monetary Fund as of December 2012. Data for credit risk was extracted from sovereign credit ratings issued by Standard & Poor’s in 2012; the dotted line shows the minimum investment grade rating.

The group boxed in red shows high political and credit risk while the outlier of Chile shows the lowest risk on both metrics. Major business opportunities are the in larger countries that mitigate business risks. However, from an investor’s perspective the graphs must be complemented by a few pointed remarks. First, there are excellent risk-adjusted business opportunities in many of the riskier countries. For example, the power generation sector in Argentina is not attractive due to the imposition of artificially low tariffs that make unprofitable any investment in the generation of power, and the oil and gas (O&G) sector in Venezuela is more attractive because the country needs to and therefore will increase production. US and European firms that provide service and technology to Petróleos de Venezuela S.A. (PDVSA) are obtaining a high volume of orders from this state-owned oil company. Second, although Chile has both good credit ratings and low political risk, its economy is small. Therefore, most investors in Chile will need to expand business to other countries to obtain economies of scale and access larger markets. Finally, political risks have been mitigated over time in Latin America because of regional integration (Mercosur and the Pacific Alliance, as mentioned).

Most countries have developed a business environment that supports investment in emerging markets, although the spread of market-oriented reforms has been anything but even. Intelligent investors will tread carefully in Latin America and the Caribbean, but enjoy the high returns that accompany the risk of the region.