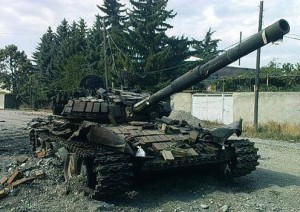 The small tank column is likely a probe to assess the potential reaction of Ukraine and the West to a larger tank invasion that may be under consideration by the Russians. This comes after Russian troops pulsed the border on April 24 in an “exercise” that also served the military intelligence function of testing Ukrainian tactical reaction.
The Russian tank probe in Ukraine comes at a time when President Obama is showing less military restraint than a few months ago. In June he ordered resumption of drone attacks in Pakistan, and he has not removed the possibility of US air strikes in Iraq against Al Qaeda terrorists making territorial gains on the outskirts of Baghdad. With sagging approval ratings in part due to a public perception of weakness in international affairs, President Obama is likely to react to the Russian tank probe with greater rigor, including increased economic sanctions against Russia, and troop build-ups in Eastern Europe. This would put significant downward pressure on the Ruble and MICEX index of Russian stocks.
JPR Status: Report.