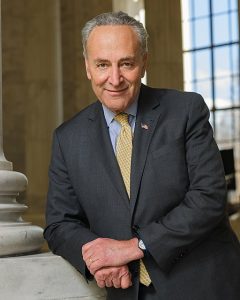 Boycott the bunch until they get demonstrably out of the slave labor business by publicly donating to Uyghur human rights groups. Some of them might have left Xinjiang by now, but not China. And, they may only have left after they got caught with their pants down. They must do better and prove that they do better, not only in Xinjiang, and China, but everywhere.

It’s filthy, especially when considering that Schumer appears to be obeying lobbyist demands to strip the new China legislation of all its sharpest teeth, including against forced labor of the Uyghurs. What’s left? Some new reporting requirements? One-thousand-four-hundred pages of anodyne words carefully arranged to do next to nothing?

Schumer did not immediately reply to my request for comment.

Axios reported on May 21 that an attempt to make some foreign donations to universities subject to Committee on Foreign Investment in the United States (CFIUS) scrutiny had been stripped from the bill. Bad move. Universities are businesses, get investments (donations and contracts) from abroad, and transfer technology and effectively influence abroad, so should be just as beholden to CFIUS as any other business.

I have a copy of the summary and the China bill itself, so checked how else it might affect my old swampy stomping grounds around Harvard Square.

There’s a lot of green in that swamp. Some of the tenured professors at Harvard, according to a source who asked to remain anonymous due to concerns about retaliation, make $1 million annually from outside contracts. This is more than double their salary. Think about what that means. If you make $500,000 a year in guaranteed salary (from Harvard), pretty much no matter what you write, plus $1 million a year in non-guaranteed outside performance-based compensation, what are you monetarily incentivized to do?

Answer: Spend time maximizing the satisfaction of your $1 million outside clients. Your academic work becomes monetarily ineffectual for you, if not a means to attract outside clients anew.

Some Harvard professors could get million-dollar contracts from China, never admit it to the public, and write opinion pieces in the New York Times that support withdrawal of U.S. forces from Asia. Few would know about their conflict of interest. They’re required to notify the university in at least some such cases, but the university is not required to notify the public. And why would they? That might stop more millions, almost totally disconnected from the academic duty to educate students, from filling professorial and departmental pockets.

The most important job of university presidents is to ensure that donors, clients, and students keep pumping the system with money. Some of them make more than $5 million per year doing so. Harvard presidents are really good at it. The university has the world’s largest academic endowment at over $38 billion. We’ll soon see its relevance to the new China bill.

The summary of the China bill reads like an opinion piece favoring its passage. None of the loopholes are included. So for a dose of reality, go to the bill itself (it’s still secret from the public – why?), especially the parts at the ends of sections that include all the loopholes. Don’t expect many tenured Harvard professors to read through the bill for you and criticize it for omissions.

Harvard got a $350 million donation from a single China-linked foundation in 2014. Who knows what else they got, because they’re not currently required to report it publicly. And, who knows what side-gigs their professors have with China.

Section 6124 of the China bill, “Disclosures of Foreign Gifts and Contracts at Institutions of Higher Education,” supposedly changes all that. It amends a prior law from 1965 and requires universities to disclose to the Secretary of Education gifts and contracts from a foreign source worth at least $50,000. This will at least supposedly reveal the big donations of hundreds of millions of dollars.

But already in the first paragraph we see a weakness. The Foreign Agent Registration Act (FARA) requires citizens to report foreign contracts with a value as low as a single dollar. While academics hide beneath an academic FARA exemption, regular citizens must follow the law. According to information from Covington and Burling LLP,

“FARA has no de minimis threshold. It can be triggered by even the slightest activity that meets any one of the statutory triggers. A single meeting, for example, with a U.S. official by an executive of a company headquartered outside the United States, or by its U.S. subsidiary on behalf of the foreign parent, might satisfy the ‘representation’ trigger. And the mere act of hosting a conference, distributing a policy report, requesting a meeting, or reaching out to opinion leaders on behalf of a foreign principal could satisfy the ‘political activities’ trigger.”

Universities, meanwhile, are profligate in their engagement with Chinese government officials. Why are they getting a pass?

Regular citizens have to report through FARA within 10 days. Universities have up to a year in some circumstances per the new China bill. Professors can just ignore it.

Whereas FARA requires citizens to file for public view all contracts made with foreigners, universities get to keep their contracts under lock and key in the new bill. They have to promise to keep such contracts on file for as few as four years, after which they can be destroyed, never to have been revealed to the Secretary of Education, much less the public. Universities in general will have to report aggregated dollar amounts of gifts and contracts, but not necessarily the details of the contracts. Reports will be made available to the public, but the bill fails to specify that the reports must be made available online and searchable via the most popular search engines. If you want to google the information, fat chance. Go to an office in Washington D.C. between the hours of one and three pm on a Wednesday, or no luck. That’s how the new law could be interpreted.

That’s 0.0000000065% of its endowment, or 0.00025% of what a typical tenured professor at Harvard Business School makes in outside contracts, according to my source, in a single year. To properly incentivize Harvard to disclose its foreign donors and contracts requires much higher fines. I would say, a minimum of $100 million. Fines should be scaled by endowment levels, not flat rates so small as to be meaningless for the biggest universities.

Institutions of higher learning are entirely exempt if their R&D expenditures are less than $5 million.

In other words, the law as currently written is next-to-useless and the biggest university transgressors with billions in their endowments and hundreds of millions of foreign income, along with the smallest institutions at under $5 million R&D, have no reason to comply with even the paltry reporting requirements found therein.

Some will argue that this lousy bill is better than nothing. My bud Jimmy Quinn at National Review writes, “Better to pass a watered-down congressional China package than to do nothing.” But that’s lily-livered. I’m no lawyer, so don’t take my advice for it. But something is rotting this bill from the inside out. Fix the bill or vote it down.

Anders Corr has a BA/MA in political science from Yale University (2001) and a Ph.D. in government from Harvard University (2008). He is Principal at Corr Analytics Inc., Publisher of the Journal of Political Risk, and has conducted extensive research in North America, Europe, and Asia. He authored “The Concentration of Power” (forthcoming 2021) and “No Trespassing,” and edited “Great Powers, Grand Strategies.”