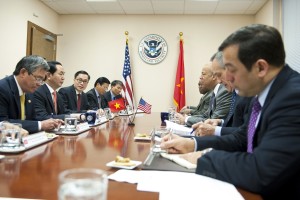 Seeking good relations between the United States and Vietnam has a long and storied pedigree. In 1945, Ho Chi Minh sought friendly relations with the United States to gain assistance against Japanese invaders and their allies in Vietnam, the Vichy French. Ho Chi Minh did this under the principle of national self-determination, which the United States officially supported, in one instance by parachuting an Office of Strategic Services team into the jungle to assist General Vo Nguyen Giap in organizing his then miniscule 200-man army.[4]

The First Indochina War reified the 1945 partition of Vietnam into North Vietnam, supported by the Soviet Union and China, and South Vietnam, backed by the United States and several allies. In the late 1950s, North and South Vietnam went to war. The United States supported the South, sending military advisers in 1959. Then, in 1965, the Johnson administration sent large numbers of troops, a force that grew to 536,000 by 1968, before being gradually withdrawn. The last U.S. troops departed in 1973, and Saigon fell to North Vietnam in 1975. It was a major defeat to the United States not unlike what happened in Iraq and now threatens in Afghanistan.[5]

While North Vietnam and the Viet Cong, its insurgent force in South Vietnam, were close to winning the war in 1974, some of the rising power’s neighbors sensed an opportunity for salami tactics, in which small slivers of territory are taken without too much resistance because of the high costs of war. Such territory grabs against Vietnam by China have continued from before the end of the Vietnam War until today.

The Battle of the Paracels between Vietnam and China in 1974, the Sino-Vietnamese War of 1979, and most recently the May 2014 Chinese oil-rig incursion, have progressively led to a fundamental and long-term strategic shift in the orientation of Vietnam’s political leadership. Long before 2014, Vietnam’s Politburo decided that Vietnam’s traditional economic and security partnerships with the Soviet Union and China were useful but insufficient to address Vietnam’s need to expand its economy and protect itself from Chinese incursions.[6]

Thus in 1986, only 11 years after the fall of Saigon, Vietnam’s leadership officially announced exploration of an opening to the West, including the United States. Vietnam’s leadership believed such an opening would assist Vietnam both in economic development and security. While the 1982 National Party Congress Report blamed the United States for hostility to Vietnam, the 1986 report, under Party General Secretary Nguyen Van Linh, noted ongoing discussions with the United States on humanitarian issues, and expressed an interest in improved relations.[7]

The United States saw the opening to Vietnam in the early 1980s as an initial opportunity to free Vietnam from the excessive influence of the Soviet Union and China. The United States also wanted Vietnam’s help in finding U.S. soldiers missing in action (MIA) in Vietnam, and fora in which to promote human rights and democratization. President Bill Clinton visited Vietnam in 2000 to encourage accounting for MIAs, repatriation of remains, promote bilateral economic ties, and encourage human rights. In 2005, Vietnam passed comprehensive religious-freedom legislation, freeing the United States to remove it from the list of countries of particular concern. And in 2013, Vietnam signed the United Nations Convention against Torture, an important step in Vietnam’s integration with major international institutions.[8]

During this period of diplomatic opening, economic and military relations developed as well. In 2006, the United States lifted its embargo on non-lethal military sales to Vietnam, but tied weapons to human-rights improvements. In 2013 the USS Vandegrift, a guided-missile frigate, made the first US Navy port call in Vietnam since the end of the Vietnam War.[9] In 2014, the United States partially lifted its lethal arms embargo on Vietnam, to provide maritime vessels and surveillance planes (potentially the P-3 Orion) to protect Vietnam’s fishing and energy industry against Chinese maritime incursions. Lethal equipment is still considered on a case-by-case basis.[10]

The economic opening to Vietnam has security undertones. The United States lifted its trade embargo on Vietnam in 1994.[11] The two countries started direct flights in 2003 and are currently negotiating Vietnam’s entry into the Trans-Pacific Partnership (TPP) multilateral trade agreement. Tellingly, the TPP excludes China, but includes the United States, and major American allies and trade partners Japan, Australia and Canada.[12]

With U.S. exports to Vietnam totaling just $5.7 billion in the same period, this produced nearly $25 billion in hard currency for Vietnam in 2014. The dollars resulting from this large bilateral trade balance gap redounds to Vietnam’s benefit and is increasing. Between 2013 and 2014, nominal growth in U.S. imports from Vietnam rose almost eight times more than the corresponding growth in U.S. exports to Vietnam during the same period.[14]

Since the opening of Vietnam to the West, the country has also benefited greatly from foreign aid. From 1993 to 2007, Vietnam received $42.4 billion of official development assistance (ODA), mainly from the World Bank, the Asian Development Bank, the United Nations, Japan, France, and Germany. By 2012, annual foreign aid had increased substantially and Vietnam was the second-biggest recipient of foreign aid globally, at over $4.1 billion in a single year. ODA in 2012 comprised a whopping 2.6% of Vietnam’s gross domestic product. For this reason alone, and because the West gives most foreign aid, political leadership in Vietnam have reason to maintain positive relations with the West.[15]

The West also benefits from its aid to Vietnam. A segment of Western voters supports such aid in order to improve global development, and policymakers appreciate that with such assistance has come positive Western influence in Vietnam, for example improving security regionally in the South China Sea, and by encouraging Vietnam to democratize, marketize, and reorient its trade and politics from Russia and China to Western markets and security-alliance systems. Western aid to Vietnam helps both Vietnam and the West.

Given trade and security opportunities, Vietnam and the United States have many reasons to increase cooperation in the 21st century. General Tran’s March 2015 visit to the United States is consistent with Vietnam’s policy of openness since the National Party Congress Report of 1986. Despite a very serious 50-year hitch in relations between 1946 and the U.S. opening of 1995, the U.S.-Vietnam relationship is back on track and progressing.

The Agenda for U.S.-Vietnam Talks in March 2015

Perhaps most importantly for Vietnam, improved security cooperation will strengthen its defense posture vis-à-vis a rising China.  Lifting the partial ban on sale of weapons to Vietnam will allow import of sophisticated naval, land and air-power military systems, including naval and coast guard boats, submarines, tanks, artillery, jets, and anti-aircraft missiles that are interoperable with NATO forces and will more effectively defend Hanoi from an attack across its land, air, and maritime borders from China. Increased provision of coast guard boats, surveillance planes, submarines, and advanced munitions will deter China from incursions into Vietnamese maritime territory, and thereby help stabilize the Pacific region and impede China in expanding its regional relative power.[19]

Not assisting Vietnam with lethal, yet conventional, military weaponry, could eventually lead it to seek nuclear weapons through its relationship with Russia. To forestall such a negative eventuality for the nuclear nonproliferation regime, Vietnam should be fully supported with military-equipment sales that more-than-satisfy its requirements for conventional defense against China. To gain maximum support from U.S. voters, these sales should come with strong encouragements to democratize and improve human rights for the citizens of Vietnam.

The United States and Vietnam will draw economically, diplomatically and militarily closer over the next decade. As China expands its economic and military power, it will succumb to hubris and attempt to conquer small slivers of land and sea from Vietnam, India, the Philippines, Japan and possibly even Russia and Mongolia depending on developing circumstances in those countries.

China may enjoy some Pyrrhic victories, but their territorial conflicts for relatively small chunks of territory will be lost in the long run as the harmed countries in the region jointly balance against the aggressor. Chinese military strategists are sadly not seeing the forest for the trees. The same regional balancing is occurring against Russia in response to its 2014 attacks against Ukraine. Indeed, the diplomatic and military balancing against China has already begun, and includes Vietnam and other nations such as the United States, Japan, India, Indonesia, Malysia, and the Philippines. These countries are moving in parallel diplomatically, converging economically, and gradually allying militarily to strengthen peace and security in the Pacific.

Rapidly improving trade between the United States and Vietnam augurs well for the relationship. As more businesses grow from United States/Vietnam trade flows, they will have an increasing interest in maintaining those flows through ensuring that Vietnam and the United States stay friendly and politically amenable to continued business. U.S. exporters to Vietnam will push Washington to increase cooperation with Vietnam, and vice versa in Hanoi.

However, it will take decades and real internal efforts towards democratization and protection of human rights for Vietnam to obtain the full support of U.S. voters and by extension, the U.S. President. The strongest U.S. allies are those that embrace democracy and human rights, such as Britain, France, Germany, Canada, Australia, South Korea and Japan. Likewise the United States will need to make efforts towards rectifying excessive injuries to the Vietnamese people during the Vietnam War. When speaking to the most diplomatic of Vietnamese, young and old alike, there is a deep pain on the subject of the Vietnam War that can be discerned behind their quiet, or occasionally not-so-quiet, discussions on the subject.

While it may seem hypocritical to some that the United States would preach human rights to Vietnam after leading actions in the Vietnam War such as the 1956 encouragement of South Vietnam to avoid a vote it would lose on unification, My Lai Massacre, mass bombing of North Vietnam, and large-scale spraying of Agent Orange adulterated with dioxins, some in the United States believe that Vietnamese atrocities in that war were as bad or worse — including initiation of the war in the late 1950s through outside support of an insurgency, and the Hué massacre of 1968.[20]

These are all highly-politicized events subject to decades of propaganda. I reprint these controversial topics not to reopen old wounds, but to remind both sides that no party was blameless in this war. Recognizing our own faults is essential to moving beyond the tragedies of the war. It is best to admit our own blame in these events where possible, extend a quiet generosity to the other side about their blame, and thereby work towards putting the history of war and blame behind us and focusing on the future of friendship between Vietnam and the United States.

Political leadership in both the United States and Vietnam are starting to agree. While the United States still takes an adversarial stance against revisionist dictatorial powers that seek to change international borders and take territory using salami tactics, such as China and Russia, it co-exists and welcomes cooperation with status quo autocracies that respect international laws and norms, such as Singapore and increasingly, Vietnam.

Over the coming decades, the United States and Vietnam will likely converge towards formal alliance based on improving common democratic values of human rights, freedom of speech and free and open elections, as did the former autocratic states of South Korea, Germany, Italy, Spain, Taiwan and Japan. All these democracies were autocratic countries that opened economically and politically over time to eventually become highly-successful free-market democracies in a tightly-knit and strong democratic alliance network. This is most likely the future path for Vietnam. Anything less leaves the country vulnerable to attack from the North and outside the main economic currents of the 21st Century.

Update (3/28): An earlier version of this article stated Mr. Tran’s United States visit lasted from March 16 to 20. This was corrected to March 15 to 20. We regret the error.

[2] The author would like to thank Robert Whitcomb, Matthew Michaelides, and Sarah Becks for their assistance with this paper.

[18] Vietnamese Public Security Minister Tran Dai Quang signed a letter of agreement with the FBI for transfer of DNA testing equipment on this March trip. http://www.eurasiareview.com/27032015-us-vietnam-gear-up-to-build-stronger-ties-to-take-on-china-analysis/