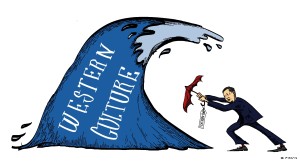 China’s education minister Yuan Guiren gave a speech in Beijing in January 2015 about banning the use of Western textbooks in classrooms that has stirred up a lot of controversy.[i] Guiren believes there should be minimal use of Western textbooks in higher education in China. His intention in doing this is to block Western values from entering the classroom, which will reduce criticism of Communist Party leadership among students.

To someone from the West, this may seem extreme and difficult to understand because it’s so far from the ideals that Western countries hold, but there are cultural differences to be taken into consideration. I believe that Guiren isn’t saying these things to stir up controversy or hinder the education of his people, but instead he is advocating for Chinese national interest.

It’s also important to know that China is not completely blocking Western textbooks, only Western textbooks that carry highly Western values. Even so, some professors in China misunderstand his decision to block textbooks. The New York Times contacted a Peking University law professor, Shen Kui, who called out the minister saying he violated the constitution by quoting Chinese constitutional law of “freedom to engage in scientific research, literary and artistic creation, and other cultural pursuits.” Despite Kui’s statement, supporters of the Communist Party remain unshaken. The political structure in China is very different than in America. In China, everything follows the leadership of the Communist Party so openly criticizing the Communist Party is considered espionage and sedition and breaking the law. So if a teacher speaks out against them, they will be eliminated and charged for breaking the law.

On February 2, Peking University officially backed down in this argument by stating on their school website that “Chinese universities are universities that support socialist quality, so of course we should stick to a socialist education.”

Universities are also a place where there is already so much free thought and discussion on culture, the Communist Party recognizes this is as a place it needs to control intellectual offerings before they spiral out of their control. The Communist Party wants to exercise their control over the young generation because they are the future of China and they don’t want the influence of Western ideals to put their politics in jeopardy.

There is already easy access to information to happenings all around the world due to technology. And it is already known that China is blocking Western social media, magazines and newspapers. The Communist Party frets for their future if too many liberal Western values are accessible to the people of China. Guiren and the Communist Party anticipate a revolt and the people will be the real victims once the war starts and the country will fall into instability. People will lose all that they have established and China as a society will lose its hard-earned progress over the last 66 years. No country wants to see this despite their differences.

Another reason behind China’s attempt to block Western values is that it is not practical to let the door open for western values to flow into the classroom without limit. Western values carry Western teaching, but because China has a different political system and history and Chinese children are taught in a different way in their primary and secondary education, it will not work out if China allows a complete free flow of Western values. China has always been proud of its ancient history and the traditional values. And this can be supported by the education minister’s words in March 2011 that, “No matter how many foreign resources we import, we will not be at risk, because we are on Chinese soil.” Some may notice the education minister’s change of mind between 2011 and 2015 that in 2011, he was against the restrictions of Western materials into the classroom, but in 2015 he is talking about blocking the way of Western textbooks that carry Western values into universities. The content of his speech has changed but the idea has not: he always stands up for national interest. In 2011, he thought it should be beneficial to learn something from Western materials therefore he was against the restrictions while in 2015 he suddenly calls for the restrictions because he sees the threat to the national regime if he does not. I think the ultimate goal of importing Western materials is to take the best knowledge out of it that would also benefit the regime.

Even Western liberal education does not allow the takeover of a value that goes explicitly against their core value. The Atlantic Magazine sharply points out American colleges’ obsession with “leadership.” Former Yale president Kingman Brewster’s assessed that “We have to make the hunchy judgment as to whether or not with Yale’s help the candidate is likely to be a leader in whatever he [or she] ends up doing.” This has been a similar ideal with other elite universities in the United States. Those universities are not saying that they will not accept students who demonstrate different personal traits, but students have long been trying to build up leadership experience in high school as to pave their way into their dream universities. I think in this case, American universities clutch to one of its core values, “leadership,” by only selecting students with leadership traits. This is their own way of filtering values to tend to those who only meet their standards of education.

What people need to understand is that the education minister has to take a stand on this issue because a growing number of Chinese students are influenced by American education. According to the statistics from the Institution of International Education, the number of Chinese students studying at American colleges has grown to 27,400, or 17%, in the last academic year and the number is still growing.[ii] He cannot control what Chinese students are influenced by in the United States but he must control what the young minds can access domestically.

Ultimately I believe that an outside observer of the speech should consider that China’s education minister has his own reasons to make this statement. He, as well as all the supporters of the Communist Party, don’t want their future to be at risk for a revolt. While Guiren did not give his own reasoning for giving the speech, I believe he gave it because he felt it was necessary to represent the Communist Party to strengthen their appearance of control over Western influence. Can you blame a government for doing everything they can to prevent revolt and war within their own country?

You can read the Chinese translation of the above article here:

This is the Chinese translation of the cartoon above: 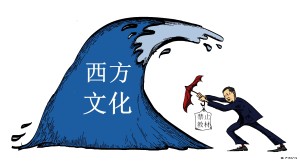 Ms. Grace Zhang is an undergraduate student at Adelphi University in New York. She founded the International Service Club and participated in the U.S. Department of State National Security Language Initiative for Youth Immersion Program in her hometown, Shanghai. She currently interns at the Community Chest of Port Washington.

This article has been edited for grammar and clarification from its original version in order to convey as clearly as possible the opinions of the author.