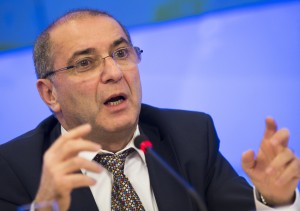 The head of the Association of Russian Banks Garegin Tosunyan speaks to the media in Moscow, Russia, Thursday, Jan. 29, 2015. Tosunyan said during his conference at RIA Novosti, that the exclusion of Russia from SWIFT will benefit no one, adding that such statements are a form of blackmailing. The Russian ruble has continued its decline to just over 60 rubles against the dollar, from 35 rubles to the dollar in July 2014. (AP Photo/Alexander Zemlianichenko)

Sergey Fursa works for Dragon Capital in fixed-income sales in Ukraine. Alexander Baldwin McCoy is a former United States Marine and worked in counterintelligence for the U.S. Department of State from 2010-2013. Irene Kovalchuk worked in finance and banking in Ukraine for over 10 years.

‘No man is an island, entire of itself; every man is a piece of the continent, a part of the main. If a clod be washed away by the sea, Europe is the less, as well as if a promontory were, as well as if a manor of thy friend’s or of thine own were. Any man’s death diminishes me because I am involved in mankind; and therefore never send to know for whom the bell tolls; it tolls for thee’ (Ernest Hemingway, For Whom the Bell Tolls).

Ukraine features prominently the media. The escalating political crisis and violence are spiraling out of control. News coverage paints an alarming picture of chaos and destruction, with NATO countries reluctant to get involved and put a stop to the madness. Many citizens of countries in Western Europe and America wonder why the suffering of the Ukrainian people should matter to them. What business is it of the people of Berlin or Paris or New York what happens in this distant land? In the cult French movie “The Toy” (1976), a child observes ‘the French only care about dead Frenchmen’[1]. Why should a regular citizen worry about what is going on in Eastern Europe, when it does not affect their life? The answer is simple. The crisis in Ukraine represents a greater threat than the mere stability of one state, and failing to respond will have disastrous ramifications around the globe.

The danger doesn’t emanate from Donetsk or Lugansk. When the Ukrainians ousted their pro-Russian president, Russian President Putin showed a willingness to inflict great harm on his own people in order to maintain Russian dominance over Ukraine, suppress the democratic will of the Ukrainian people, and limit the influence of the European Union in shattered remnants of the former Soviet Union. Moscow fears a Ukraine with the desire to reform and integrate into the European community because it would signal to other states in Russia’s shadow the possibility of doing likewise.  The annexation of Crimea and the outbreak of the war in Eastern Ukraine was ignited by Kremlin propaganda and Russian military infiltration into Ukrainian territory. German Chancellor Angela Merkel, one of the softest-spoken of Russian critics, has accused the Russian government and people of “having lost connection with reality”. More than 5,600 have been killed and 1.6 million displaced since the spring of 2014.[2]

Russia, under Putin, is not just a threat to Ukraine, it is a threat to the entire global order. Obsessed with encirclement, Putin wants to stop not just Ukraine, but all nations on Russia’s periphery from a drift towards the West. He also seeks to undermine and fracture the solidarity of the European Union and NATO. While Russia is not powerful enough to stand against the rest of the developed world in open war, Putin has successfully sewn division among his opponents by steadily escalating the crisis in Ukraine to a simmering proxy-war that has challenged NATO’s will to respond. Putin has exploited the unwillingness of the Western powers to be drawn into conflict to allow him to seize territory and punish defiance within Russia’s sphere of influence. By empowering violent separatist militias and infiltrating Ukrainian territory with Russian operatives, Russia has sought to undermine the legitimacy of the elected government of Ukraine.

Russian expansionism has been supported and justified by their domestic popular culture, and the discourse within Russian society largely mirrors Putin’s depiction of the crisis as having been provoked by the West. Sergey Lukyanenko, a science fiction and fantasy author whose Russian-language writing reaches an audience of millions, began advocating the necessity of war between Russia and Ukraine as early as February 2014, before the annexation in Crimea and the fighting in Donbass.  He accused Ukraine of infringing upon the rights of Russian-speakers, without citing any specific examples of such violations. Additionally, Lukyanenko sensationalized the threat of a fringe group of Ukrainian nationalists who received less than 2% of the vote during the fall elections to the Ukrainian Parliament, claiming they planned to attack the Russian Federation.

These hyperbolic claims were made within days of ousted pro-Russian President Yanukovych departing from Ukraine. Like the Taliban in Afghanistan, Russia is a nation led by violent extremists whose ideology is based on opposition to integration with the modern world. Russia’s state religion has become a radical form of nationalism that is fundamentally incompatible with accepting the decline of Russia’s prestige and power.  The repudiation of western values and the threat those values pose to Russian society is the foundation of the Kremlin’s nationalist propaganda machine.

After the annexation of Crimea, Putin used the same incendiary rhetoric common to all totalitarian regimes; he appealed to his population’s existential fears. Conflict incited by such justifications is difficult to defuse. Oppressive forms of government require an external enemy upon which to project the frustrations and complaints of its population. “War is Peace”, was one of the slogans used in the ‘doublethink’ of dystopian author George Orwell to describe how totalitarian governments exert control.[3] Once on the path to war, totalitarian regimes rarely back down in the face of escalation.

The conflict in Ukraine is far more significant than the fate of a single country. If Putin is allowed to successfully counter Ukraine’s desire for increased integration with democratic Europe, it will profoundly impact the ability of other nations to expunge the influence of Russia and liberalize their economies and institutions. People in Asia, the Middle East, Africa, and Latin America will watch the events in Ukraine closely as a test of the willingness of the United States and Europe to protect human rights and guarantee the sovereignty of democratic governments. What Pacific nation would dare defy an increasingly assertive China if NATO stands idle while Ukraine burns for having the temerity to reject Russian dominance?

The E.U. and the U.S. have imposed some economic sanctions upon Russia and top individuals in the Russian regime. These were steps in the right direction, but more is required. It is not enough to prevent elite members of Putin’s inner circle from vacationing in their mansions abroad. As President Poroshenko told the U.S. Congress, he cannot fight a war with donations of blankets. Plunging oil prices have dramatically impacted the Russian economy, and harsher, broad-based sanctions can make the pain more acute. The U.S. and E.U. should remove Russia from the international SWIFT banking system, to show seriousness and resolve.

Using SWIFT, the primary international bank messaging system, as a mechanism for sanctions carries risks. Having the bulk of international financial traffic pass through SWIFT enables greater control over international money laundering and enables western intelligence agencies to track and defeat financing for terrorism. Cutting Russia off from SWIFT would create a stronger incentive for Russia and other aggressor nations to create and participate in their own, alternative bank messaging system, with looser controls and oversight. Losing SWIFT access, however, was one of the primary factors which forced Iran to the nuclear bargaining table, and the incentive for countries like Russia and China to develop a competitor system already exists, even if SWIFT sanctions go unused. Developing an alternative would take significant time and investment, and Russia would not be able to respond rapidly to being severed from SWIFT.

America and the European community should progressively cut major Russian banks off from the SWIFT system and inflict further pain upon the already-weakened Russian economy in order to restrain Putin from further aggression. Without access to international money transfers, Russian imports and exports would significantly slow and the country would stagger under the burden of further inflation.[4]

As the NATO powers confront Putin with sanctions, they necessarily must combine the influence of multiple countries to deal with Russian aggression. Putin seeks to sew division among the European and NATO allies, and so it is even more important that they stand united and committed to their shared defense. Putin has sought to undermine the legitimacy of the Ukrainian state and its democratic government, and so the West must work assertively to strengthen Ukraine’s state institutions and confirm its legitimacy. Putin has attempted to use propaganda and diversionary groups as well as radical elements from the local population to destabilize Ukraine without seeming to bear responsibility. We must be clear and assertive in condemning and exposing these tactics.

Most importantly, Putin has convinced the Russian people that Ukraine is a victim of Western meddling, and its government is a puppet of NATO. We must not prove him right. Far more dangerous than tanks and missiles, in Putin’s eyes, is a popular desire to adopt Western institutions and values. Putin’s bloody invasion of Chechnya shows his lack of concern with expending Russian lives to advance his geopolitical goals. Commentators in the West remain divided on the issue of military intervention.

Some fear that any supplies of arms and advanced technology will merely escalate the level of violence and result in division among the NATO allies, ultimately serving Putin’s goals. Others warn that totalitarian regimes such as Putin’s will never back down except in the face of a powerful military deterrent. However, both skeptics and interventionists can unite behind a platform of expanded sanctions against Russia and robust aid for the Ukrainian people.

Ukraine needs the kind of aid that will turn it into a thriving state, not a failed one. Putin wants to make an example out of Ukraine for desiring to embrace the rest of Europe. Europe should in turn counter Putin’s extortion and reprisals with generous investments to ensure that Ukraine’s example is one of increased strength, independence, and prosperity. The returns on this investment would be seen in other states following Ukraine’s example and embracing liberal reforms in turn.

In the face of strength and unity from the west, without escalation, Putin will realize that Russia’s pockets are not as deep as its foes. Expanded sanctions will punish a Russian economy already reeling from reduced oil revenues and a weak currency. We must not make this humanitarian disaster spiral out of control, but we cannot stand idly by. The war in Russia’s shadow for the moment appears far away. But this war, for which the bells of churches of Eastern Ukraine are sounding the alarm, could change the global order for decades to come. Those bells toll not only for Ukraine, they toll for us all.

[4] The Economist, “The pros and cons of a SWIFT response,” November 22, 2014. http://www.economist.com/news/international/21633830-blocking-rogue-states-access-worlds-financial-messaging-network-potent-measure