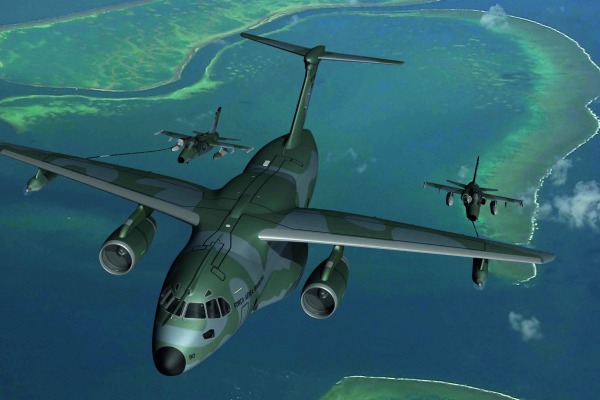 Boeing and Airbus are negotiating with manufacturers of small jets

Since 2006 airlines have shied away from jumbo jets in favor of smaller, fuel-efficient jets for greater granularity in fulfilling the demand for shorter routes [2]. Both Boeing and Airbus compete on almost every type of aircraft, from single-aisle jets to widebody aircraft that can fit more than 300 passengers. However, Airbus is expanding in the direction of smaller jets after the European company purchased from Bombardier the C-Series program of medium-range airliners. Therefore, Boeing found itself with a gap in its product portfolio. Embraer´s regional jets are easier to fill than some Boeing 737s or Airbus A320s for short routes.

News of Boeing’s interest in Embraer grew in October 2017 after Airbus´s deal with Bombardier. Rumors of a possible partnership with Embraer intensified when Boeing lost a bid to block the C-Series from the U.S. market. At Boeing’s urging, the US Commerce Department had decided that duties of nearly 300 percent should be placed on the C-Series aircraft. But in a surprise move, the US International Trade Commission, an independent agency, ruled against Boeing in January 2018, raising the stakes of its courtship with Embraer.

If the tie-up with the Latin American manufacturer is accomplished, a trend in the aircraft industry will have emerged because the deal mimics the strategic move made by Airbus on Canada’s Bombardier. [3] If both deals go ahead, they will revolutionize the landscape for aircraft manufacturing through the enlargement of global aviation giants, extending the hold of the Boeing-Airbus duopoly in bigger passenger aircraft down into the smaller regional market.

If in the beginning of the negotiations all options for the Boeing-Embraer deal were open, currently the most likely structure involves the creation of a joint venture focused on the development and commercialization of a specific family of products, the medium-sized commercial jets. Boeing needs the Brazilian government’s approval of a partnership with Embraer due to concerns over the transfer of sensitive defense technology and the protection of the intellectual property of Embraer’s military programs, such as the KC-390, a medium-size, twin-engine jet-powered military transport aircraft. The technical details of KC-390 include fly-by-wire technology, state-of-the-art loading, and unloading system for handling cargo, that allows the aircraft to be quickly reconfigured, and a computed air release point (CARP) technology integrated with the fly-by-wire system to provide greater accuracy during air dropping, thereby reducing crew workload. The aircraft also integrates the technological solutions developed for Embraer 190 commercial aircraft. [3]. Although Boeing´s capabilities put the company in the frontier of technology, the Embraer deal would give access to a technology that is ready to commercialize because it already passed the risky and expensive phases of product development and testing.

The benefits to Boeing of a deal with Embraer

There are several reasons that an Embraer deal makes sense for Boeing. The range of benefits includes the integration of assets such as manufacturing facilities, the increase of service capabilities, the complementarity of product lines and the cultural affinity between the two firms, that would ease any deeper collaboration between both companies.

The Benefits to Embraer of a deal with Boeing

Market, production, and technology are the main beneficial areas to the Brazilian company if a deal with Boeing is reached.

Potential obstacles to the deal

The Brazilian government has the right of veto due to the possession of golden shares, a special type of stock that allows Brazil a veto over any strategic decision involving Embraer, and any decision that might halt military-related projects. This is the first of three uncertainties to which the deal is subject.

Another uncertainty reflects the importance of Embraer to Brazil´s foreign trade because the firm is the country´s third-largest exporter, together with nationalistic pride regarding Embraer´s role as a leading Brazilian multinational, especially in an industry that entails strong ties to governments around the world, including the US, China, Russia, France, UK, and many other large economies.

The third potential no-go for the deal comes from the importance of the company to the technological development and leadership of the aerospace cluster located in São José dos Campos. The Brazilian government will likely block the transfer of sensitive, innovative defense technology and the termination of highly-paid manufacturing jobs.

The deal may provide a high entry-barrier for Chinese, Russian, Indian, and Japanese competitors.

Boeing, backed by the Trump administration, seeks to cooperate with smaller players after Airbus became even more global through its agreement with Bombardier. Both manufacturers are keenly aware of looming competition from new entrants into a market they have dominated for decades. For instance, China’s Comac, Boeing´s incoming Chinese competitor, has plans to compete in the market soon. If Boeing, Embraer, and the Brazilian Government reach an agreement, the existing cooperation between Embraer and Comac will probably end due to risks of technology transfer to the Chinese firm. Additionally, Embraer´s share in the gigantic Chinese market for middle-sized jets will likely decrease.

China´s Comar is testing its own single-aisle C919 aircraft and expects to mass produce the jet from 2021. It also cooperates with Russia´s Rostec State Corporation to co-develop a long-haul widebody aircraft. Additionally, Russia´s Sukhoi manufactures the SuperJet 100, built to compete with Embraer´s E-Jet and Bombardier´s C-Series. Meanwhile, Japan´s Mitsubishi has ambitions to break into the commercial aircraft market with its MRJ regional jet, and India´s Hindustan Aeronautics Limited (HAL) may want to move up in the industry ladder as well.

Champions of the deal at both Boeing and Embraer continue to aggressively pursue a partnership and negotiations with the Brazilian Government. However, the window of opportunity for agreements is narrowing.  With Brazil’s presidential election in October 2018, political opposition to the deal based on technology transfer and potential disruption of established markets is only expected to grow, putting pressure on Boeing and Embraer to find common ground quickly.

The importance of Embraer to Brazil and the technological and geopolitical implications of the aerospace sector also make the design of the deal difficult to agree. An independent military and defense arm of Embraer, under the control of the Brazilian government, should be part of the solution. Additionally, the agreement should address the issue of the many relatively highly paid jobs located in São José dos Campos, Embraer´s main manufacturing site. Acquiescing to the Brazilian government’s demand that jobs should not be transferred to US factories, and the Airbus-Bombardier template, which created a joint venture focused on commercial jets and excluded Bombardier´s military technology, is a recipe for success.