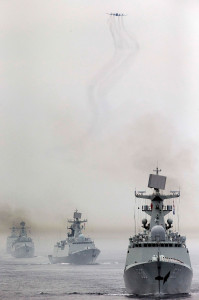 China is using a very blunt and escalatory instrument — threatening general deterioration in military relations — to respond to a limited issue of Chinese individuals stealing trade secrets. On May 20, the United States Justice Department indicted five People’s Liberation Army members for hacking United States commercial data.  The remarkable speed with which China responded the following day, and at the highest level, suggests that commercial hacking is an officially-approved state policy on the part of China. The Chinese threat of reduced military cooperation and thereby deteriorating military relations is clumsy in that the Chinese would look better had they simply launched an investigation of the individuals — an investigation that they could later claim shows the indictment as baseless. The broad Chinese threat of deteriorating military relations invites an increase in US military attention to Asia — exactly what the Chinese should be trying to avoid. The clumsiness of the Chinese response to the indictments indicates a rash Chinese leadership prone to irrational military strategies, with consequent market volatility and political instability. The US and its Asian allies should respond with a measured forward deployment of military forces, and redoubled diplomatic energy towards greater alliance cooperation, including between Asian allies and NATO.

For legal and political reasons, the US will not be able to simply withdraw the indictment. It would increase the perception of an increasingly weak US foreign policy. This will lead Chinese diplomats to retaliate in some manner, further decreasing stability between the US and China. Expect mutual diplomatic retaliation to exert downward pressure on the Yuan (compensated by People’s Bank of China buying of Yuan), as well as downward pressure on Chinese stock indexes, including SHCOMP, CSI-300, Bloomberg China-US 55, and HSCEI. Expect Chinese index losses to increase with every additional diplomatic spat that ensues, and to slowly recover during periods of diplomatic quiet.

An attempt to distinguish between military and commercial spying — to say one is ethical and one is not — will be lost on the Chinese. From a Chinese perspective, improved commercial intelligence leads in turn to improved industrial power, higher tax revenue, and increased military power. This is the key Chinese military strategy with respect to commercial spying.

China may be taking advantage of perceived US weakness in its response to Crimea, as well as a perceived weakness in US support of Japan and the Philippines in the South and East China Seas. To decrease Chinese threats, the US should increase its forward deployment of military forces, and more strenuously defend its allies Japan and the Philippines. The same strategy of forward deployment should be used to decrease threatening behavior by Russia.

Recent territorial, maritime, and cyber attacks by the Russians and Chinese are linked, and reified by ongoing joint naval exercises near Shanghai. The combined Russian and Chinese threat must be responded to not only defensively, but by forward deployment of military forces and more tightly coordinated democratic alliance relationships. NATO and Asian-Pacific partners — especially the democratic countries of Japan, Australia, South Korea, and the Philippines — must more effectively coordinate and posture on an offensive footing in order to deter Russian and Chinese threats.

Russia and China are ultimately paper tigers in that their levels of military spending and technology are low compared to the US and NATO, especially when considering potential military contributions of Australia, Japan, and South Korea. The defense spending force ratio of NATO, plus Japan, Australia, and South Korea, as compared to Russia plus China, is over 3.8 to 1.  But to take advantage of this military superiority and stop Russian and Chinese territorial, maritime, and cyber incursions, the US and NATO must take a strategically offensive position. Only the threat of offense will deter Russia and China from infringing on their neighbor’s territory, and on the intellectual property rights of US corporations.

The military superiority of the US and NATO is sufficiently great that such an offensive posture poses little risk of developing into great-power war. However, if Russia and China are allowed to absorb territory and resources in the Ukraine and the China Seas, this favorable force ratio will deteriorate. The closer the force ratio is to parity, the more likely Russia and China will risk great-power war. The best way to avoid such war is to take an offensive posture now, when Russia and China are relatively weak, and thereby stop their territorial and military growth.