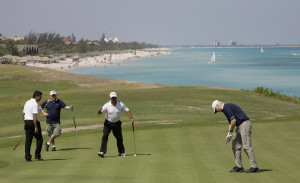 The Cuban government has taken increasingly large steps in recent years toward economic liberalization. In this photo taken April 23, 2010, golfers use a practice area during the Montecristo Cup Golf Tournament in Varadero, Cuba. Cuba issued a pair of surprising free-market decrees on Thursday Aug. 27, 2010, allowing foreign investors to lease government land for up to 99 years, potentially touching off a golf-course building boom, and loosening state controls on commerce to let islanders grow and sell their own fruit and vegetables. (AP Photo/Franklin Reyes)

Attendees of the “Cuba Opportunity Summit” – held on April 1, 2015 by the Wharton School of the University of Pennsylvania at the NASDAQ Marketsite in New York City – consisted mainly of American companies and entrepreneurs, who are caught up with the gold rush-like fervor over the prospect of finally doing business with Cuba. That island, which has endured a harsh trade embargo imposed by Washington since its takeover by Fidel Castro and his Communist revolution, is perhaps the ultimate frontier market on the planet, since American companies have been forbidden from conducting any trade with that regime for decades.  The one glaring exception has been the opening of food trade, which Bill Clinton allowed before leaving office in 2000. Cuba has since become a multi-million-dollar market for various U.S. agricultural and food products.

President Obama’s December 2014 announcement to normalize U.S. relations with Cuba, which will presumably increase food export opportunities, travel, as well as openings in areas like banking, telecommunications and building supplies, is being viewed in many circles as a process that will ultimately end the ongoing U.S. trade embargo against Cuba. Speakers at the Wharton Cuba Summit, which was covered by CNBC (complete with on-site interviews by its Chief International Correspondent, Michelle Caruso-Cabrera), included top executives from Norwegian Cruise Line, Discovery Networks, Thomas Herzfeld Advisors, and NASDAQ, along with a stream of U.S. government officials (headed by Roberta Jacobson – Asst. Secretary, Bureau of Western Hemisphere Affairs – who’s been leading Washington’s negotiations with Cuban officials to normalize diplomatic relations between the two countries), as well as think tanks from the Brookings Institute to the Americas Society. In other words, Cuba has finally “arrived” – receiving long overdue “prime-time” attention in the United States. Even some of the Cuban government officials that showed up were overwhelmed by the attention they were getting from fellow attendees.

To further put all this into context, New York Governor Andrew Cuomo drummed up a trade delegation that he’s planning for Havana later this month – intending on striking deals with the Cubans that may result in more export-oriented jobs for some of his constituents. This followed a trade deal struck between New Jersey telecom IDT Corp. and the Cuban phone company ETECSA earlier this year to provide long distance phone service between Cuba and USA, as well as a forum held by a New York attorney and Cuba specialist last month (that was attended by a slew of local companies and businessmen wanting “in” on Cuba).

The question some are starting to ask is whether this hype over U.S. trade prospects with Havana in the near future is justified. Such queries are  fueled by Cuba’s roller coaster history with foreign investors. The country’s Foreign Investment Act of 1995, which permitted joint ventures between foreign companies and entrepreneurs and Cuban state entities, kicked off the first wave of international investors in Havana, which resulted in the arrival of Canadian corporations (from Sherritt International to oil exploration firm Pebercan Inc., Labatts beer, and even the Pizza Nova franchise), and European hoteliers like Sol Meliá (Spain), Accor S.A. (France), LTI (Germany) and Iberostar (Spain).  These and other foreign investors were all drawn to Cuba in part because of the conspicuous absence of American competition.

In addition, various independent entrepreneurs were also seduced to the siren call of investing in Cuba, such as Frenchman Michel Villand (who launched a chain of “Pain de Paris” bakeries in Cuba – specializing in French bread and pastries), Toronto high-tech guru Robert Sajo (who introduced tourism-based e-commerce to the Cubans through the portal he launched:  Cubaweb.cu), and the politically-connected Chilean national Max Marambio (who’s best known for launching the food manufacturer Alimentos Rio Zaza – which made the line of “Tropical Island” brand fruit juices found in the country’s hard currency supermarkets – known locally as “dollar stores”, since food items sold there could not be purchased with Cuban pesos).

These and other ventures, including the limited opening of real estate development that occurred during the late 1990s-early 2000s at Havana’s exclusive Miramar suburb (which resulted in the construction and sale of new luxury apartments for deep-pocketed foreigners by European real estate development firms), all occurred while Fidel Castro was still firmly in power, who felt compelled to tolerate such capitalist ventures, after his country suffered the collapse of the Soviet Bloc in 1989 (plunging Cuba into economic deprivation in the early to mid 1990s). Western investors who made Havana their second home felt largely welcomed at the time.

However, after Fidel Castro became ill in 2006, which resulted in the transfer of presidential powers to his brother Raúl (complete with his assumption of the presidency in 2008), there was a shift in the country’s investment climate away from its open door policy toward entrepreneurs large and small into the island.  After Raúl Castro formally took power in 2008, he has shown a preference for dealing with countries that were more diplomatically friendly to Cuba, such as China, Russia, Venezuela, Vietnam, and Brazil (which bankrolled the expansion of Mariel port, along with building an adjacent economic processing zone/EPZ – which is designed to create jobs for local workers). It is no coincidence that some of these governments are the so-called BRICS countries that are striving to build an alternative international economic order to the prevailing one controlled largely by Washington.

While this was happening, western investors found themselves increasingly being targeted by Raúl’s anti-corruption drive, hurting the financial interests of prominent businessmen like Chilean Max Marambio (who ironically was once known as “Fidel’s best friend”), along with Canadian nationals Cy Tokmakjian (the one-time distributor of Hyundai and Suzuki vehicles in Cuba), Sarkis Yacoubian, and British citizens Stephen Purvis and Amado Fakhre — who ended up in prison. The alleged lack of due process rights provided to such detainees in Cuba’s legal system, as well as the confiscation of their assets (which ran in the tens of millions of dollars), put into question the viability of the island’s foreign investment climate in the minds of a growing number of foreign investors who are familiar with that country.

No doubt, a stream of international bad press was generated by this anti-corruption drive, which also resulted in the detention and convictions of various locals. Even the Canadian Embassy’s assistance of its nationals in these cases failed to prevent Tokmakjian and Yacoubian from receiving lengthy sentences (although they were allowed to return home after a short time). Britons Purvis and Fakhre (who originally planned to build golf courses and luxury homes near Havana) were eventually allowed to return to the UK (for time served for minor financial offenses) after spending 15 months in pre-trial detention.

However, like others caught in these anti-corruption probes, their assets were not returned to them. This prompted Purvis to complain to The Economist magazine about the lack of due process afforded to foreign businessmen who are ensnared in such anti-corruption probes, mentioning other westerners that he came across while imprisoned (such as a rep from Ericsson), while noting a conspicuous absence of those from diplomatic allies like China, Brazil, Venezuela, and Russia. Purvis’ comments were vindicated when the Cuban government announced that the same golf venture that he was originally planning to build was handed over to a Chinese group in 2014.

Meanwhile, Chilean investor Max Marambio has the distinction of being able to say that he slipped out of Cuba just before that country’s authorities were able to arrest him – forcing that government to try and convict him in absentia in 2011 (handing him a 20-year sentence – which means that he’s still a wanted man in Havana).  Marambio, in an effort to clear his name, went to the International Chamber of Commerce (ICC)’s arbitration court in Paris and sued the Cuban government over lost profits and confiscation of his assets in 2010, and managed to win a million-million-dollar judgment in his favor. It’s still not known, though, how he’ll be able to collect on that judgment.

Given the turbulence that at least some foreign investors have endured in Cuba, it remains to be seen how Raúl Castro’s government will behave in the near future, now that it is on the verge of getting what it has long wanted:  the lifting of the punishing U.S. embargo against his country. Some speculate that the Cuban government will likely ease on such questionable anti-corruption probes, in order to avoid more negative international press, now that the global (especially U.S.) spotlight is on that country, and Congress will eventually vote on the future of the embargo.

For now, the big winners appear to be the lawyers and trade consultants that U.S. investors will rely on, who are starved for guidance on scoping viable trade opportunities with Cuba. Of course, the most immediate concern for such investors is what the U.S. Treasury Department’s OFAC (Office of Foreign Assets Control) Division defines as legal versus illegal transactions with Cuba – given that it’s still in charge of enforcing the trade embargo in this evolving regulatory landscape. The well-publicized fines that OFAC imposed on foreign banks such as BNP Paribas last year (2014) serves as a reminder that trade risks exist on both the U.S. and Cuban sides.