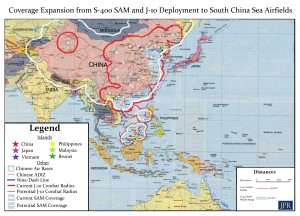 The authors publish, for the first time, a new map showing the effect of South China Sea Air Strips being built by the People’s Liberation Army, on the Effective Range of Chinese S-400 surface-to-air missiles and the J-10 multi-purpose fighter.

In mid-April, China started building a military air strip in the South China Sea,[1] and to the extent that air strips are replicated on China’s other occupied South China Sea atolls and shoals, it will dramatically increase the effective range of its military aircraft and rocketry, including surveillance, search and rescue, helicopter, transport, bomber, and fighter aircraft, as well as its surface-to-air missile (SAM) and anti-submarine warfare (ASW) capabilities.

Chinese air assets advantaged by the South China Sea air strips include the Chengdu J-10[2] and J-11 fourth-generation multi-purpose fighter jets[3], the Soviet-made S-400 SAMs[4], the twin-propeller Y-12 Turbo Panda maritime patrol[5] and surveillance aircraft, ASW aircraft and helicopters, unmanned aerial vehicles such as the Pterodactyl Wing Loong[6], and cruise missiles such as the Chang Zian (Also spelled Chang Jian, or Long Sword)[7], with a range of up to 2,000 kilometers.[8]

With its weaponry closer than ever to the Philippines, Vietnam, Malaysia, Brunei, and Indonesia, not to mention potential refueling of bombers and tankers, the People’s Liberation Army Air Force (PLAAF)[9] will have improved air power projection capabilities towards Australia and India.  SAMs based on the new islands will significantly augment already-existing naval SAMs such as the HQ-9 (with an operating range of up to 100km).[10]

We  produced a new map that demonstrates the synergies that China’s territorial claims and air strip construction in the South China Sea offer to just two of its many relevant weapons systems — the new Soviet-made S-400 SAM and the workhorse J-10 fighter jet, which makes up about half of China’s jet fighter forces. The map is by no means exhaustive of the PLAAF’s range and power projection capabilities in Asia and the Pacific, but it does show a dramatic effect of island building on the range of two major Chinese weapons systems. The map draws on expert knowledge of Chinese military capabilities, particularly its S-400 missile system and use of J-10 fighter jets, and demonstrates the increasing military threat that Chinese medium-range air forces pose to neighboring countries, including the Philippines, Vietnam, Malaysia, Brunei, and Indonesia.

The new map includes locations of all active Chinese air bases, as well as notional air bases on major disputed islands in the South and East China Seas.[11] We also chart the ranges of both current and potential Chinese SAM and air defense technology. The potential Chinese SAM and air defense ranges illustrate the destabilizing effects that both S-400 missile system installation and air base construction in disputed South China Sea islands would have on regional security.

The S-400 missile system is one of the Chinese military’s most recent acquisitions. In a move announced last month, Russian state-owned arms manufacturer Rosoboronexport will deliver six S-400 SAM missile systems at a total cost of $3 billion.[12] These missile systems are mobile, allowing them to be positioned and fired anywhere on Chinese territory, including South China Sea Islands, and they have a range of 400 kilometers. As illustrated on the map, Chinese island building extends the range of the S-400 over the Philippines, Malaysia, Brunei, and at the limit, Indonesia.

The new S-400 missile will complement China’s force projection capabilities from its J-10 fighter jets. These Chinese jets, produced indigenously by the Chengdu Aircraft Industry, have a ferry range (unloaded, one direction flight) of 1,850 kilometers and a combat radius of 550 kilometers.[13] The J-10 will be able to ferry up to 1,850 kilometers to a South China Sea Island, pick up fuel and ordnance, and fly combat sorties of up to 550 kilometers further. Like the S-400, the islands extend the range of the J-10 fighter to cover the Philippines, Malaysia, Brunei, and possibly Indonesia.

In recent months, the PLAAF has also announced plans to upgrade its fighter jet fleet with new J-10B fighters, the first of which are presently entering into service. [14]These upgrades fit into a broader Chinese strategy of increasing airborne capabilities. The PLAAF had 220 J-10 fighters in April 2014 and plans to increase that figure to 400 by 2020, an annual increase of approximately 30 fighters per year.[15]

China’s rapidly modernizing air force, combined with its aggressive territorial growth into the South China Sea and building of military air strips, is a strategic game-changer for ASEAN[16] nations: Japan, Australia, India, and the United States. As such, it is profoundly destabilizing and will require concerted and coordinated actions on the part of these countries and their allies to convince China to stop building military air strips in the exclusive economic zones of other countries, withdraw its forward deployment of military assets, and thereby ease tensions. The alternative is appeasement and encouragement of China’s next expansionist move.

Anders Corr holds a Ph.D. in international relations from Harvard University. He spent five years working in military intelligence, including at US Pacific Command Headquarters and in the North Atlantic Treaty Organization’s International Security Assistance Force (ISAF) Joint Command Headquarters in Kabul, Afghanistan. He is Principal at Corr Analytics Inc. Matthew Michaelides is Editor of the Journal of Political Risk. JPR Status: Report.

[11] The base of the map is from a 1994 Australian Surveying and Land Information Group (AUSLIG) map.