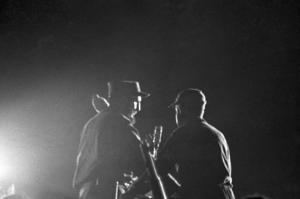 Tatlin’s Whisper #6 is a performance art piece by Tania Bruguera first performed in 2009 in Havana. Ms. Bruguera invited audience members to speak their minds without censorship from a podium flanked by two persons in military uniform. In reference to Fidel Castro’s speech of January 8, 1959, in which a white dove alighted on his shoulder, a dove was placed on the shoulders of speakers. Ms. Bruguera’s call for December 30 demonstrations by Cubans is detailed on the #yotambienexigo Facebook and Twitter sites.

First let me offer congratulations, because politicians are expected to make history and today, December 17th, 2014, has been a historic day.

You have made history by proposing that the embargo/blockade become empty words. With the restoration of diplomatic relations, you have transformed the meaning of fifty-three years of policies defined by one side (the United States) and used by the other (Cuba) to ideologically guide the daily lives of Cubans everywhere. I wonder if this gesture is not also a proposal to kill ideology itself? Cuba is finally seeing itself, not from the perspective of death, but of life. But, I wonder, what will that life be and who will have the right to that new life?

As a Cuban, today I call for the right to know what is being planned with our lives and, as part of this new phase, for the establishment of a politically transparent process in which we will all be able to participate, and to have the right to hold different opinions without punishment. When it comes time to reconsider what has defined who we are, that it not include the same intolerance and indifference which has so far accompanied changes in Cuba—a process in which acquiescence is the only option.

As a Cuban, today I demand there be no more privileges or social inequalities. The Cuban Revolution distributed privileges to those in government or deemed trustworthy  (read: loyal) by the government. This has not changed. Privilege created the social inequalities under which we have always lived, inequalities which were then rationalized as a revolutionary meritocracy and are now being transformed into a reliable entrepreneurial class. I demand that the emotional and tangible rights of those who cannot participate in this new phase—those at the bottom—be protected.

As a Cuban, today I demand that we not be defined by the financial markets nor by how useful we can be to government. I call for equality for the Cuban who, due to the blockade/embargo, spent his life working in a factory only to come home a proud worker’s hero but now has no place in a world of foreign investments and can only hope to receive a pension defined by the standards of socialist times, not by today’s market economy. What is the plan, Raul, to avoid the same mistakes made by the countries from the former socialist camp? To avoid returning to the Cuba of 1958? How do we repair the emotional abuse the Cuban people have endured through the politics of recent years? How do we ensure there is social and material justice? How do we guarantee we will not become a colony, that we won’t have to accept our new providers without question—as happened first with the Soviet Union and then with Venezuela?

As a Cuban, today I call for the right of peaceful protest in the streets to support or denounce any government decision without fear of reprisal. I call for the legal right to establish associations and political parties with platforms that differ from that of the ruling party. I call for the decriminalization of civic activism, civil society, and of those with different points of view. I demand that the legitimacy of political parties born of the popular will be recognized. I call for direct elections in which all political parties are allowed to participate, and for ideological discrepancies to be resolved with debate and not via acts of repudiation.

As a Cuban, today I demand the right to be a political being—not merely an economic entities or symbolic exchange to make history.

As a Cuban, Raúl, today I want to know the vision for the nation we are building.

As an artist, Raúl I propose you today to exhibit “Tatlin’s Whisper #6” at the Plaza de la Revolución (Revolution Square). Let’s open the microphones and let all voices be heard. Let’s not offer just the clatter of coins to fulfill our lives. Let’s turn on the microphones. Let’s learn together to make something of our dreams.

Today I’d like to I propose that Cubans take to the streets wherever they may be on December 30th to celebrate, not the end of a blockade/embargo, but the beginning of our civil rights.

Let’s make sure it’s the Cuban people who will benefit from this new historic moment. Our homeland is what hurts us.

Tania  Bruguera  is  a  political  and  performance  artist  researching  ways  in which Art applies to everyday political life by transforming social affect into political effectiveness.  Her  long‐term  projects  have  been intensive  interventions  on  the institutional  structure  of  collective  memory,  education  and  politics.  To  define  her practice  she  uses  the  terms  arte  de  conducta  (Conduct/Behavior  Art),  Arte Útil (Useful Art), political-­timing specific and aest-­ethics. Ms. Bruguera’s call for December 30 demonstrations by Cubans is detailed via Facebook and Twitter at #yotambienexigo.