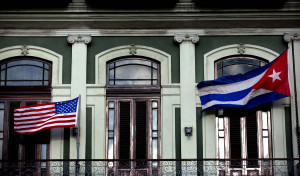 A Cuban and U.S. flag wave from the balcony of the Hotel Saratoga where a U.S. Congressional delegation is staying in Havana, Cuba, Monday, Jan. 19, 2015. Cuba’s foreign minister told the group of U.S. senators and congressmen Monday that his country is open to greater diplomatic and trade ties but the congressional delegation did not meet President Raul Castro, the man who will make many of the key decisions about the new U.S.-Cuban relationship. (AP Photo/Ramon Espinosa)

Yesterday, American officials announced that the United States and Cuba would re-establish full diplomatic relations, ties that the U.S.  had broken off in January 1961. The United States will once again have an embassy in Havana, and Cuba an embassy in Washington. Travel and financial restrictions between the countries will be eased by executive order as everyone waits to see if Congress will accept President Obama’s recommendation and end the U.S. embargo of the island nation.

Increasing global recognition of Cuba’s economic liberalization over recent years have made a continued policy of estrangement untenable.

In recent months, the European Union and Cuba have held high-level trade talks that will almost certainly produce a deal.  And some Latin American leaders –  and not just leftists – had expressed increasing frustration with U.S. policy toward Cuba and even threatened to boycott the Summit of the Americas without Cuba’s attendance. Further, within the U.S. support for the embargo is at an all-time low.[1]

Should Congress end the embargo, Cuba would offer a wide range of opportunities to American investors. Just last month, the Cuban government published a list of projects totaling $8 billion for which Cuba seeks foreign investment.[2] And while political risks – namely of operating under a dictatorship – remain, the government run by President Raul Castro seems to be taking greater initiative in improving Cuba’s economic health and in recognizing foreign investment’s role in making that happen.[3]

Before the Cuban Revolution of 1959, Cuba was a prime destination for U.S. tourists and investment. It will be again.

Matthew Michaelides is Editor of the Journal of Political Risk and a Research Assistant at Corr Analytics. Robert Whitcomb provided editorial oversight for this article. JPR Status: Editorial, archived 12/18/2014.