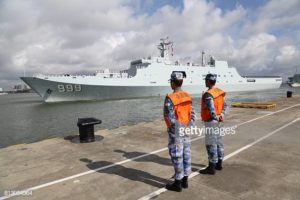 Nonetheless, China’s growing military presence in Djibouti clearly underscores this traditionally continental power’s new global and particularly naval ambitions. As Tokyo, Beijing’s initial justification for opening a PLA base, a decision that contradicts a long-preached policy denouncing the establishment by great–and “imperialist”–powers of such facilities, was its participation since 2008 in the fight against pirate attacks against civilian ships off the coast of Somalia. But, when the base was inaugurated, the discourse had already changed: from Djibouti, the PLA can more rapidly deploy peacekeepers in the various United Nations missions in Africa and the Middle East in which China participates; it can also better protect Chinese interests and nationals at risk in Africa and the Middle East. More recently, Beijing has admitted that its first overseas military base would help secure its Belt and Road Initiative (BRI), Xi Jinping’s ambitious plan aimed at extending China’s economic and geo-strategic influence worldwide.

There is a close connection between China’s military and economic interests in Djibouti. The first driver of Beijing’s growing interest in this port-city has been Ethiopia’s unprecedented development since the late 1990s. Feeling multiple political affinities with then strongman Meles Zenawi’s regime and willing to enhance its relations with the African Union (AU), the seat of which is located in Addis Ababa, China started to get heavily involved in the Ethiopian economy. In 2011, it launched the rebuilding of the Addis-Ababa – Djibouti railroad, after France, which had completed in 1917 the first railroad, had declined to do it, seeing the project as unprofitable. The same year, Beijing funded and completed the construction of the new AU headquarters, equipping it with the necessary devices to remain informed about the organization’s activitie. Closely linked to these developments, in the last ten years, China has boosted its construction and cooperation projects with Djibouti, Ethiopia’s main access to the sea and international trade: 90% of its imports and exports transit through Djibouti harbour.

China’s increasing economic interest in Djibouti is also part of a larger strategy aimed at controlling a bigger share of maritime transportation and port facilities around the world. In 2012, Beijing decided to finance the construction, realised by a Chinese company, of a new terminal in Djibouti Multipurpose Port (DMP) in Doraleh. At the same time, the public behemoth China Merchants bought a 23.5% share in the company that has owned and operated DMP since 2017 (the rest is controlled by the Djiboutian government). Decided by Xi Jinping in 2013, the construction of the PLA base on the premises of the DMP is no coincidence: situated 8 miles away from downtown Djibouti and both the French and the US military bases, the Doraleh area constitutes China’s stronghold in this country. Although the PLA has kept a low profile and its personnel’s training has remained unimpressive, in 2018 it completed the construction of a new pier that is directly connected to its base and will allow large PLA Navy ships to moor there. Moreover, the extension of the Djibouti – Addis Ababa railways to the DMP is about to be completed.

It is true that after DP World of Dubai lost the management of Djibouti Container Port (DCP) situated just outside of Doraleh in February 2018. The DCP has been controlled by the Djiboutian government and its containers have remained screened with the help of the US. But Djibouti has asked Pacific International Lines, a Singaporean company that has established a “strategic partnership” with China Merchants to expand DCP’s activities. And, next to both DMP and DCP, in 2017 China Merchants started to build Djibouti International Free Trade Zone (DIFTZ), where it seeks to attract logistics and big data companies involved in the BRI. IZP, for example, has already established itself there.

China has been involved in many other large infrastructure projects in Djibouti as the pipeline bringing fresh water from Ethiopia and the Ghoubet port designed to export Lake Assal salt. But playing a key role in Djibouti’s port activities has been Beijing’s clear priority.

China’s projects in Djibouti have had two major consequences: Djibouti’s increasingly unsustainable debt, mainly to China; and the growing awareness among other stakeholders, including countries such as India, of China’s both civilian and military maritime ambitions, in the Indian Ocean and beyond.

Owing to its large infrastructure projects, today China holds the lion’s share of Djibouti’s external debt: 77% of its GDP ($1.4b) of a total representing 88% of GDP at the end of 2018. It is clear that Djibouti cannot pay back either the interests (10% of GDP in 2018) nor the principal of this debt in the next ten years. As a result, China has accepted to extend its loans’ reimbursement period. But this will not solve the issue because most of the Chinese projects in Djibouti are losing money: the train, the DIFTZ and even the DMP which revenues have difficulties trickling down to China Merchants. How can this issue can be solved? Will China Merchants propose to acquire the DMP, as it bought the Hambantota harbour in Sri Lanka in 2017? Djibouti is adamantly opposed to this idea. But heavily indebted to China, it will have to make concessions that will strengthen China’s influence in this country and feed the concerns of others.

It is unlikely that France, the US or Japan will decide to scale down, let alone move out their military presence in Djibouti. And the Djiboutian government also badly needs their financial contribution as well as France’s security guarantees. But China’s growing activism there is complicating these nations’ own plans. The relations between their military and the PLA have remained distant and sometimes frosty, as the laser incident made public by the US in 2018 has illustrated. And more importantly, Beijing’s growing presence in Djibouti underscores the close relationship between its economic, particularly harbour, projects and its geo-strategic ambitions, like the BRI and the PLA’s new missions. China’s geo-strategic ambitions are enough for India to suspect China of building a “string of pearls” aimed at encircling it; enough also hopefully for the Americans, the French and others, to explore fresh avenues to play a bigger role in Djibouti’s ambition of becoming, if not “East Africa’s Singapore”, at least a commercial and logistic hub that will not be lost entirely to the Chinese.