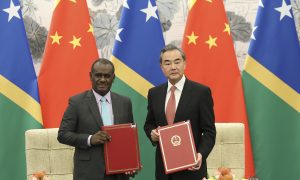 It is apparent that Xi Jinping’s Chinese Dream now includes the Pacific Ocean where his Foreign Minister Wang Yi has undertaken a Pacific Islands tour of broad scope and ambition. While  China’s economy is stagnating, it nevertheless continues to drive for increasing its world power as Minister Wang aims to finalise the China-Solomons Security agreement and has hosted a Pacific Island Foreign Ministers meeting whilst in Fiji. Wang’s proposals have prompted strong responses from the United States and its allies in the Indo-Pacific, in particular Australia and New Zealand.

What Wang proposed was that China and the Pacific countries jointly formulate a ‘marine spatial plan’ as a way to promote sustainable development of the blue economy. China is offering more investment in the region by mobilizing private capital and encouraging Chinese enterprises to directly invest in Pacific Island countries. What is being viewed more ominously, however, are the new security arrangements reflecting General-Secretary Xi’s “global security initiative” that involves dispatching Chinese police and other security forces to work with participating island nations at both bi-lateral and regional levels and a new emphasis on cyber security. Minister Wang’s plans also include the establishment of a network of Confucius Institutes with embedded Chinese language consultants, teachers, and volunteers on the islands. In the US, these Confucius Institutes and their teachers have been seen as vehicles of CCP propaganda and as a way to stifle academic speech on the activities of the Chinese government. A separate “five-year action plan” would appoint a Chinese special envoy to the region, institute Chinese-built crime laboratories, provide hundreds of training opportunities, and hold various high-level forums.

Wang’s proposals to cash-strapped Pacific islands place a larger PRC footprint in the Pacific, which would then challenge the existing Pacific Island Forum (PIF) that currently defends international law and maintains peace and security institutions in the region. Additionally, it puts the immediate spotlight on the island nations themselves and on American Indo-Pacific allies. Responses are coming fast and furious from the US, Australia, New Zealand, France and now Canada, which is developing a highly anticipated Indo-Pacific Strategy following its recent ban on Huawei participating in Canada’s 5G wireless network on national security grounds.

For Australia, China’s expanding interests in the Pacific Islands prompted a domestic reaction in the Australian Federal election campaign in 2022 following China’s security deal with the Solomons that would allow Beijing to deploy forces to “protect the safety of Chinese personnel and major projects in Solomon Islands.” The Labor party and the Liberal/National Coalition acknowledged that whoever won the election would face serious challenges in the Pacific region. And so it proves to be.

As recently as April 22, a senior delegation led by Kurt Campbell, the U.S.’ National Security Council Coordinator for the Indo-Pacific, met with the Islands’ leadership to register their interests and concerns. While recognizing the Solomons’ sovereign decision-making, Campbell said that if steps were taken that created a potential security risk to the wider region, the U.S. would have concerns with that. The meeting launched a new high level strategic dialogue, and according to Campbell, the U.S. has to step up its game across the board in the Pacific by meeting Pacific nations’ needs. China’s intentions in the Pacific have been outlined and they make it clearer why the Sino-Solomons security agreement met with international concern, which has led to the U.S. reopening an Embassy in the Solomon Islands after a break of 30 years.

For China’s Foreign Minister to make such a tour of the Pacific Islands at this moment, it is reasonable to ask what are China’s primary interests in proposing a Region-wide economic/security pact with Pacific Island nations and what are the geopolitical implications of Minister Wang’s plans for the Pacific?

While world media attention has been focused on Russia’s illegal war in Ukraine, China quietly completed the groundwork for the Solomons deal which had taken years to execute. It was connected to China’s campaign to convert Pacific islands from allegiances with Taiwan to the People’s Republic. The costs of converting the Solomons were expensive, but this investment now appears to have a big pay-off with a strategic window to the South Pacific opening for the PRC. Wang Yi’s tour seizes the moment to prise that window further open. Even though he has failed to win a consensus from the 10 Pacific nations to sign up to his “Common Development Vision,” at least half-a-dozen countries including Samoa, Kiribati and Niue have signed up for enhanced co-operation in Beijing’s trillion-dollar Belt and Road infrastructure investment program. So, what are China’s core interests in this Pacific expansion?

First, the example of the security agreement with the Solomon Islands to allow China to “send police, armed police, military personnel and other law enforcement and armed forces … [and] that Beijing could send ships for stopovers and to replenish supplies”, makes explicit China’s blueprint for expansion. These elements suggest the potential establishment of a military base, although the Solomons’ government denies this will happen as does China. But similar agreements have already been made with other Pacific island nations that acceded to build dual-use, military-commercial facilities in return for money and assistance. This is precisely what China wants and what China has been working toward for decades and reflects a fully weaponized foreign-aid program conflated with dual-use (civilian/military) development along with regional cyber control.

Second, the Solomon Islands’ vast economic zone is resource rich, replete with timber, significant fish stocks, and a range of other natural resources both above and under the sea. With 1.4 billion people there should be no surprise to anyone that Beijing is keen to exploit the region, despite claims to the contrary.

Third, flipping the Solomon Islands from its long-term support for Taiwan in 2019 was a diplomatic success for the PRC. It mounts pressure on other nearby island nations, including the three French territories of the South Pacific: French Polynesia, New Caledonia, and Wallis and Futuna, and U.S. allies the Marshall Islands and Palau amongst other neighbours including Papua New Guinea, Timor Leste and also Indonesia. Indeed, New Caledonia has faced intense independence activism from its indigenous Kanaks, and recent referenda voted only narrowly to remain with France.

A fourth message is conveyed internationally that U.S. (and Taiwanese) influence in the Pacific fades while Beijing’s rises. Domestically, China’s state-controlled media presents this deal as a significant strategic loss to the U.S. and Australia.

A further interest for China, and connected to its soft power push into the Pacific, is to eventually add to its collection of ‘Global South’ votes at the United Nations (UN). Although the Solomons did not follow China in recent UN votes on two key questions regarding Russia: removing Russia from the UNHRC and ending Russia’s illegal war in Ukraine. China abstained and the Solomon Islands voted against Russia. Nonetheless, incentivizing South Pacific nations to vote with China at the UN benefits the Middle Kingdom’s broader plans to shape peak governance bodies.

Almost like jigsaw puzzle pieces, the Solomon Islands deal fits perfectly into China’s efforts to reframe the world order, piece-by-piece co-opting small states. It is now clear that China’s ambitions extend very broadly across the Pacific. When viewed in the context of geopolitics, including the war in Ukraine, it is clear enough that the Beijing-Moscow axis is underway at the global level. In Xi’s words, “to maintain world peace and security and upholding non-interference in the internal affairs of sovereign nations.” But what Xi says and what he does can be two very different things. Along with Russia, the PRC certainly uses coercion, interference tactics and brute force to achieve strategic objectives.

Looking ahead, Indo-Pacific nations including the U.S. and its allies face a concerted assault on the current international rules-based order. To assume Beijing’s intentions are benign, even helpful would be naïve at best, even though some challenges are best shared, such as climate-change action and responses to natural disaster. Poorer countries like the Solomons and other vulnerable Pacific Island nations are confronted with monumental challenges. But playing one superpower off with another in pursuit of a better local deal may have unintended consequences. This potential was foreseen by David Panuelo, President of the Federated States of Micronesia, who says, Mr Wang’s “pre-determined joint communique” should be rejected [as] it could spark a new “cold war” between China and the West. However, unless the West effectively helps Pacific Islands as respectful, reliable partners, when vulnerable some Pacific forum nations may well seek alternatives. But based on previous examples, assistance agreements with China will have serious strings attached and the promise of sustainable security architecture can certainly lead to more authoritarian control.

Yan C. Bennett is Assistant Director for the Paul and Marcia Wythes Center on Contemporary China at Princeton University, U.S. John Garrick is a university fellow in law at Charles Darwin University in Australia. Acknowledgement: Thanks to Margaret McCuaig-Johnston, University of Ottawa, for contributing comments on an early draft relating to Canadian Indo-Pacific policy developments.