South Korea has been an important US ally since 1953.  The alliance is multifaceted, ranging from US military presence in South Korea and coordination on the North Korea nuclear issue to cyber, and from energy to climate change.[1]  South Korea is also the US’s sixth-largest trading partner.[2] Despite the lasting strength of the alliance, the relationship between South Korean President Moon Jae-in and President Trump is fraying under the strain of the North Korean nuclear threat and of renegotiating the bilateral US-Korea free trade agreement (“KORUS “).  President Trump accused President Moon’s government of “appeasement” of North Korea,[3] but ultimately agreed not to attack North Korea without South Korea’s permission.[4]  Trump also threatened to terminate KORUS, which he described as a “horrible deal.”[5]  Beyond the relationship between the two leaders, the position of US Ambassador to South Korea has been vacant since President Trump took office, and South Korean protestors assembled with anti-war signs at an anti-Trump rally outside the US Embassy in Seoul during President Trump’s visit this past Tuesday.[6] 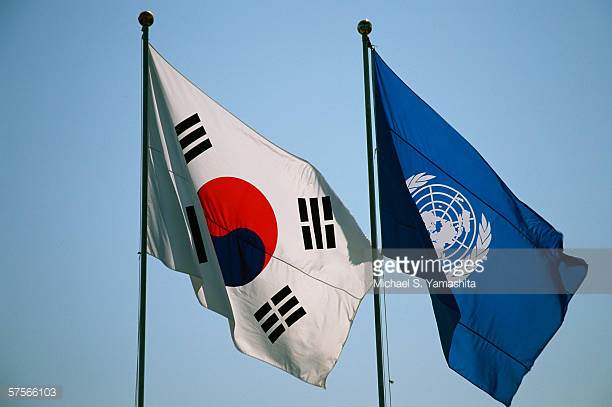 Tae Song Dong, South Korea. The flags of South Korea and the United Nations wave in the breeze. Source: Getty

Signed by the Bush administration, KORUS entered into force in March 2012.  At implementation,[7]

In addition, under KORUS, over 95% of bilateral trade in consumer and industrial products would become duty free by March 2017, and most remaining tariffs would be eliminated by March 2022.[9]

Although initially resistant to U.S. Trade Representative Robert Lighthizer’s request to renegotiate KORUS, South Korea agreed to renegotiate the deal in July.[10]  Two rounds of renegotiations have already taken place.  Particularly given Japan and Vietnam’s resistance to US calls for bilateral trade agreements, it would behoove the Trump administration to ensure that the KORUS negotiations are successful for all parties.[11]

The US: At Your Service

Foreign direct investment (FDI) is an investment made by a company or individual in one country in business interests in another country.[17]  FDI’s key feature is establishing effective control or substantial influence over decisions of a foreign business. [18]

By producing (and often selling) goods and services in countries other than where the enterprise was first established, FDI may be considered a complement or substitute to external trade.[19]

The Trump administration is concerned with the widening goods trade deficit since KORUS went into effect.  The US goods trade deficit with Korea doubled from 2011 to 2016, with the auto sector driving 86% of this deficit.[22]  The U.S. lost 5 million factory jobs since 2000[23]–88% to automation and other factors, and the balance to trade.[24]  Worker retraining and other forms of trade adjustment assistance might be better policy tools than trade renegotiation to assist these laid-off factory workers.

KORUS also generated winning sectors: US goods trade in agriculture ran a $5.7bn surplus in 2016, and three groups representing US beef wrote to the USTR and Secretary of Agriculture Sonny Perdue to support of KORUS FTA.[25] The successes in the trade of US agriculture and US surpluses in services trade and in FDI[26] drive jobs for American workers in agriculture and in services such as delivery, telecommunications, education, and health care.[27]

Getting Off the Rocket Ship

Since inception in 1962, the USTR has operated independently of the State Department to facilitate focus on American jobs.  Historically a global champion of free trade, the US has entered a period of retrenchment with the rationale of protecting US jobs.  As we have discussed, the relationship between protecting jobs and trade agreements is enormously complex.  Meanwhile, globalization continues in Asia.

The TPP-11 has had four official meetings in 2017[28] and is expected to work through a general agreement on the sidelines of the Asia-Pacific Economic Cooperation (APEC) Summit in Vietnam over the weekend.[29]  By way of background, the TPP-11 represents the Trans-Pacific Partnership signatories other than the United States, which withdrew from the agreement during President Trump’s first week in office.  These eleven countries are Australia, Brunei Darussalam, Canada, Chile, Japan, Malaysia, Mexico, New Zealand, Peru, Singapore, and Vietnam.  Having withdrawn from TPP, US businesses and consumers will naturally be excluded from the beneficial tariff reductions in these treaties.  In addition, the China-led Regional Comprehensive Economic Partnership (RCEP) free trade agreement continues to make progress.

While the USTR renegotiates KORUS FTA and as President Trump visits Asia for the first time, protecting American jobs is paramount.  At the same time, with China’s rising strength and global ambitions and North Korea’s growing threat, the President and Congress should maintain focus on the health of the US-South Korea alliance.  The continuation of a US-led global order and bolstering critical bilateral alliances remain critical to our long-term success as a nation.

Bhakti Mirchandani is a Senior Vice President at an alternative investment management firm.  Most recently, Bhakti served as Global Relationship Director at Barclays for multilaterals, non-profits, and government agencies focused on international development.  Previously, Bhakti was a Vice President at Unitus Capital, a firm that seeks to open global capital markets for the poor, and worked in corporate strategy and investment management at Barclays Capital/Lehman Brothers, where she was also the firm’s microfinance specialist.  Bhakti co-founded the Global Microentrepreneurship Awards (later Citi Microentrepreneurship Awards) and was a consultant to Women’s World Banking.  Bhakti holds a BA, MBA, and MPA  from Harvard.  Bhakti is a Term Member at the Council on Foreign Relations and an advisor to multiple social enterprises and impact investors. JPR Status: Opinion.