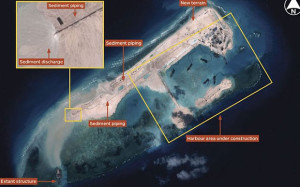 Recent satellite imagery from the Centre national d’études spatiales (CNES) show that China is building an island on Fiery Cross Reef near the Spratly Islands in the South China Sea.

Today, 100 participants gathered at the Harvard Club of New York City for the Journal of Political Risk’s Conference on the South China Sea to discuss all aspects of the ongoing territorial dispute between China and the Southeast Asian states of the Philippines, Vietnam, Malaysia, Brunei, and Indonesia. Papers given at the presentation will be among those compiled and released in a forthcoming book on the South China Sea dispute.

The event opened with a discussion of some of the recent actions taken by China in the South China Sea. Bill Hayton, author of The South China Sea: The Struggle for Power in Asia (Yale University Press, 2014), spoke on China’s recent island-building operations on several disputed reefs and islands in the South China Sea, including Mischief Reef and Fiery Cross Reef. Mr. Hayton noted that China acts as it does because it genuinely, albeit wrongly, thinks of itself as the rightful owner of maritime territory within the 9-dash line. He noted that China did not claim new features in the recent island-building, rather it built on features occupied for 20 years or more. Lastly, Mr. Hayton predicted that China would continue to expand, provoking further conflict.

Award-winning author of The Coming Collapse of China (Random House: 2001) Gregory Chang, Gregory Poling of the Center for Strategic and International Studies (CSIS), and Professor David Denoon emphasized the importance of India’s increasing role in the dispute. While India has in the past had no major maritime dispute with China, said Mr. Chang, the two countries did have a long-standing border dispute in the Himalayas. Chinese trade routes, including the “Maritime Silk Road” through the Indian Ocean and the “New Silk Road Economic Belt” through Central Asia, flow around and possibly constrict India in China’s quest to access markets in the Middle East and Europe, according to Mr. Chang. In response, India is countering with an “Act East” strategy of naval patrols, maritime oil drilling and military cooperation with South China Sea disputant countries.

Mr. Poling argues that Washington’s strategy trusts Beijing and Manila to understand the trigger for U.S. intervention — “a point not even entirely clear to U.S. policymakers.” Such an assumption is dangerous given the frequent aggressive military interactions between China and Philippines in the Spratlys. To deter China from overstepping the red line and restrain the Philippines from adventurist maritime actions, according to Mr. Polling, the US should clarify its defense commitments in a way that assured the Philippines that the US has its back. This would counter voices in the Philippines, especially from the left, that disparage the US commitment as untrustworthy. Such a strengthened commitment, according to Mr. Poling, would also depoliticize the Enhanced Defense Cooperation Agreement, helping it get out of the the Philippine Supreme Court.

Peter Maslanka of Seton Hall University highlighted the growing perception in Indonesia of a diplomatic and military threat emanating from China. His presentation looked at Indonesia’s threat perception between 2008 to 2014, with a dramatic rise in Indonesia’s perception of a threat from China in 2014. Data consisted of content analysis of articles from The Jakarta Post, largely read by the elite of Indonesia. Increased perceptions of threat, according to Mr. Maslanka, are from China’s 9-dash line claim to Indonesia’s Natuna Island chain. The Natunas have rich fishing grounds and gas reserves. Mr. Maslanka noted that tensions in the South China Sea, especially between Indonesia and China, have increased Indonesia’s military spending, and will likely increase the likelihood of conflict.

Professor David Denoon of New York University discussed his research into the theory of “fair division,” as compiled in a 1996 paper he published in the Journal of International Negotiation. This paper modeled what a just division of the disputed maritime territory might look like, although he also suggested that the Chinese government would likely have little interest in the approach. “[The Chinese] think they can get the whole thing,” he stated, referring to the disputed maritime territory circled by the 9-dash line.

The event also gave attention to the role of Chinese domestic politics in the country’s position – and flexibility – on the South China Sea dispute. Professor Benjamin Liebman of Columbia Law School and Isaac Kardon of Cornell University both disputed an audience member’s notion that the Chinese business community would have significant input in any state foreign policy decision on the disputes.

Mr. Kardon argued that the nine-dash line is unjustifiable under international law. However, he made the caveat that it is reasonable to predict that a global power, especially China, would violate international law. The South China Sea conflict, according to Mr. Kardon, is an element of geopolitical efforts that seek to control the most important strategic and economic space. China also seeks, through its aggressive actions in the South China Sea, to demonstrate to domestic audiences that the State, and Xi Jinping more specifically, are not only effective but also “glorious” in battle. The nine-dash line, according to Mr. Kardon, seeks to impart legal and political legitimacy to the Chinese claim. It also seeks to promote visual closure of space that paves the way for making it the recognized territory of China. Capacity building of the navy and fishing fleets gives the Chinese jurisdiction teeth, including through domestic law and economic use. All these Chinese strategies are meant to erode over time the claims by other countries that are based on international law.

Benjamin Purser, a PhD candidate at the University of Colorado who also works for the RAND Corporation, argued forcefully for the need to modify the current 1982 UN law governing maritime disputes, the UN Convention on the Law of the Sea (UNCLOS). Purser argued that the language of the treaty should explicitly exclude not just uninhabitable islands, as it does at present, but also physically small islands, that is, those with an area smaller than a limit to be determined by negotiations or the court. This would remove the incentive to engage in environmentally destructive and fiscally costly island building campaigns as are being seen in 2015. Mr. Purser presented empirical support for his argument with a multivariate logit regression, which found that maritime disputes between 1946 and 2014 (n=3381 dispute-years) were positively correlated with islands, hydrocarbons, autocratic states, and high GDP growth of claimant countries. Maritime dispute contestation was negatively correlated with fisheries, democratic states, and anocratic states.

Dr. Anders Corr is Publisher of the Journal of Political Risk, and Principal at Corr Analytics Inc. He holds a Ph.D. from Harvard University, and a joint B.A./M.A. from Yale University. He spent five years as a civilian in military intelligence, including with Asia, Europe, nuclear proliferation, and Afghanistan as foci. Matthew Michaelides is Editor of the Journal of Political Risk. JPR Status: Report. This report was updated with additional information on 5/11/2015 and 5/12/2015.