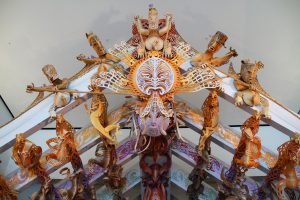 It is proposed that a global indigenous organisation is formed, as a place of intellectual discourse and debate, much as is Chatham House in London, or Clingendael in The Netherlands.

Indigenous economic and social development would be an emphasis, within the context of liberal market economics, human rights, and the rule of law. Maori are a First Nation for instance which is conspicuous for their market enterprises and primary production capabilities in fisheries and forestry. The economic policies of Peruvian Nobel laureate Hernando de Soto Polar would be Base One for economic development. The tribal market enterprise and mutual benefit society aspects of the modern developed indigenous polity, are Base Two. Base Three are the capabilities to sustain globalised business.  The indigenous bond issues that former Canadian Prime Minister Paul Martin devised, and the Indigenous Merchant Bank idea that has been raised in New Zealand, are instruments that can be explored.

Indigenous nations could benefit from their own caucus in the international system, so as to contribute to the UN, to support the performance of the UN Rapporteur’s Office, to contribute to the Geneva institutions, UNESCO and the World Intellectual Property Organisation (WIPO). As indigenous business enterprise develops, indigenous peoples would benefit from pooling their knowledge, sharing their own information, and counselling each other on the challenges the international environment now presents them.

The history of the relationship between European colonisers and indigenous nations reveals the unique importance of Western legal systems in mitigating the worst effects of colonisation. Even in the darkest and bloodiest days of the conquistadors, the Government of Charles V pioneered aboriginal rights in jus gentium and International Law. By these means indigenous rights were created, and gradual recoveries occurred.  Unless it is possible for a court to find against a nation state government, there can be no enforceable indigenous rights. Corrupt national governments are likely to run roughshod over such protections. Indigenous rights are rights that Western governments in the 20th century acknowledge and protected indigenous polities hold.

An opportunity exists then for a strong indigenous voice in the international community of organisations, to counsel and inform indigenous nations, nation states and global organisations alike, on a pro bono basis. It would act as a global watch-dog for indigenous identity and rights, like Helsinki Watch, and it would enhance the stake that loyal indigenous nations hold in the welfare and security of their protector nations. Protected nations will be able to discern threats to their rights, while Protector nations in turn will be able to close off exposure on this front.

The UN Declaration on the Rights of Indigenous Peoples (2007) is an aspirational document, containing principles, which the United States, Canada and New Zealand and indigenous citizens had already applied in established juridical settings.  It was because of these initial concerns that the United States, United Kingdom, Canada, Australia and New Zealand originally voted against UNDRIP. However, it is evident that UNDRIP is the culmination of indigenous rights frameworks since the first definitions made under Charles V at the Salamanca Debates.

Although those nations have now accepted UNDRIP, it is clear that those governments and their indigenous partners and citizens should now look to defending and promoting their own successful resolutions. Bernard Cadogan, one of the authors of this piece and former advisor to New Zealand Prime Minister Bill English, advised in favour of New Zealand’s accession in 2010. The authors now advise that the New Zealand Government and Maori should protect their own patch in the broader spectrums of indigenous governance, market participation and in the international system.  The geopolitical climate has changed, and what seemed propitious a decade ago, now operates in a highly polarised environment.

Broad-brush statements of principle are a genre of UN production. The reality of indigenous rights lies in the grain. If racism was sedimented in the original state formation, then resolutions to racism are only achieved by law and indigenous participation in democracy. These results are only sustained by democracy. Indigenous rights are most respected when rule of law, rather than rule by law, is the context. These positive results are either incremental, fine-grained, case by case, heavily nuanced, often bespoke, or else they are the consequence of abrupt yet peaceful change.

UNDRIP is like a motorway. The indigenous rights systems of North America and New Zealand are a busy system of urban traffic circulation by comparison. The Mercosur nations of South America operate a similar system of oversight.  The value proposition of our kind of state is that it is self-correcting, transparent, and equitable, and that it is able to trust and responsibilitize the wider citizen body to respect indigenous rights. Many Latin American nations and indigenous nations are in the same position. A case exists then for an alliance of indigenous nations to represent their protection frameworks and nation state citizenships in the international arena.

Protection of indigenous rights are not the property of any section of the political spectrum. There have been instances where Canadian Liberal, US Democrat and New Zealand Labour Party policies have been unhelpful to their First Nations, although their aspirations have been broadly well-intentioned. There have been marked instances of centre-right achievement, such as the Presidency of Richard Nixon, the Diefenbaker Administration in Canada, the Bolger Government in New Zealand, and the social policy that Bill English wrought there between the Crown and Maori.

Paradigm shifts come from the Right as well as the Left.  First Nations members themselves are politically diverse – some are progressivist identity activists, while others represent traditional conservative rural values. An overlap exists between the two, in every country of the kind we have been discussing. There is no need for a robust polity to be “fragilized” and polarised over indigenous policy. Where a nation state has had difficulties securing itself on this front, its friends and allies may assist in policy development through the proposed organisation.

New Zealand has one First Nation – Maori, who amount to more than 16 % of the population. They enjoy unique constitutional access on a variety of levels. New Zealand’s first capital was Russell (pop 900) in the Bay of Islands in our warm orange-growing north. That was where the Treaty of Waitangi was signed on 6 February 1840, where the Crown Colony Government had its capital 1840-1841, where the United Tribes of New Zealand had its seat 1835-40 and where the British Resident was based 1834-40. The United States had appointed a consul at Russell, while France sent a Société des missions representative. We could envisage a further compact there, founding the proposed organisation.

Other sites are possible – such as Queenstown in the South Island, which would lend a Davos or Jackson Hole locale and serenity. New Zealand is also the home to many Pacific diasporas. The affairs of the Oceania are constant contributions to our news cycles and politics.

Maori iwi (tribal) leaderships, New Zealand government and judicial circles, and civil society offer the capabilities to support such an organisation. Transparency International constantly ranks New Zealand among the very least corrupt nations. Our jurisprudence is perhaps one of the richest, the most acute and original come from a small nation. New Zealand is aligned with the Western alliance system and is a Member of Five Eyes. It is radically committed to the peace and stability of the Pacific.

Yet like Australia, New Zealand is a victim of the Ocean Liner age – no purely global international organisations have headquarters south of the Equator, unless they are regional or Antarctic bodies. Montevideo for instance fared well because it was an easy voyage during the Interwar period precisely when the architecture of the International System developed considerably.

It is time to remedy the absence of a global indigenous organisation, that may provide pro bono economic and social development advice, political and geopolitical counsel to indigenous polities and communities, and dispute resolution, and also enable more of an indigenous voice in international affairs, through the contexts of the democratic sovereign nation states, with which they share citizenship.