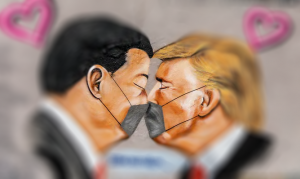 Wary of what a world order under the CCP might entail, democratic countries including the United States, Japan, Australia and India have re-activated the informal Quadrilateral Security Dialogue (‘Quad’). The Quad involves informal summits, information exchanges and combined military drills known as the Malabar exercises. Including Australia in this year’s Malabar drills follows an upgrade in June 2020 in the security relationship between Australia and India to a ‘Comprehensive Strategic Partnership’. Why ramp-up the QSD now and what are the potential risks and benefits to member nations?

Why ramp-up the Quad Now?

‘Soft power’ is the ability to attract and co-opt, rather than coerce. In international relations it involves shaping the preferences of others through persuasion and typically involves economic and/or cultural influence. China’s use of soft power has become weaponized and coercive. Wolf-warrior diplomacy has replaced conventional diplomatic dialogue, conveying a clear signal: it is dangerous to cross China in any way.

The promise of win-win solutions for all who participate in China’s peaceful pursuit of prosperity has been replaced by an extensive military build-up, growing control of global shipping lanes (such as the South China Sea), economic influence over numerous nations, control of global cargo flows and a securing of future Chinese naval access and forward military basing. Against this backdrop the world views the US as slipping faster than anticipated. China is rising militarily and the comparative ratio of China versus US war ships, ICBM growth, nuclear reach and technological capability sees an emboldened China ready to further assert its will over global affairs. The promise of access to the vast riches of China’s markets remains, but one must not be critical of any move China makes or risk being punished.

The Quad presents itself as having a positive agenda — a diplomatic network that assists the democracies, as Australian Foreign Minister Payne puts it:

“to align ourselves in support of shared interests… governed by rules, not power. We believe in the fundamental importance of individual rights and in a region in which disputes are resolved according to international law.”

China, however, has denounced the Quad as an ‘elite clique’ attempting to contain its rise.

The US, Japan, Australia and India share the common challenge of deteriorating relations with China. India faces border clashes in the Himalayas; Australia experiences economic/political coercive pressure; Japan is currently embroiled in a row with Beijing over Chinese vessels patrolling near Japanese-controlled Senkaku Islands, which China claims for its own, calling them the Diaoyu Islands. Japan and the U.S. have also spoken out against China’s crackdown in Hong Kong, mass detention of ethnic Uighurs in Xinjiang, and its contested claims in the South China Sea. These nations’ relations with China are at rock bottom. But they can sink further.

Current CCP messaging downplays the influence of ancient history on current strategic thinking, presenting Chinese expansion as peaceful and non-threatening to the established global order. Yet Chinese history does inform modern day strategists who are well versed in the Warring States period (pre-475 BCE) in which constant violent struggles between competitive groups occurred over centuries and deception was an important component of strategy. Sun Tzu’s classic Art of War identifies the benefits of inducing complacency in opponents, manipulating their advisors, and stealing their technology and ideas. Patience was generational in achieving their goals. More recently, it defined the Chinese revolution under Mao. This is occurring today under the Xi regime and CCP strategy has coalesced around the concept of the ‘100 Year Marathon’ with China to be restored as the pre-eminent global power by 2049. China’s soft power is designed to reinforce CCP messaging with these ancient techniques, which pressure foreign businesses and governments into complying with China’s wishes; Sun Tzu’s lessons have been well learned. The Belt and Road Initiative is a major illustration of the strategy with routes penetrating  Western Europe,  Asia and the Pacific region through key routes, corridors, global shipping routes and maritime ‘hubs’. The ‘Digital Silk Road’ is also now an integral component of the BRI and the rise of technology wars has already commenced.

With the rapid advancement and expansion of Chinese technology things become more futuristic.

Aware of where things are going, the United States this year enacted its National Defense Authorization Act 2020 (NDAA) formally establishing a US ‘Space Force’ – as a branch independent of its defense forces. The move was, in part, triggered by China’s rapid growth of artificial intelligence (AI) and the CCP’s hunger for greater control of  21st century global information flows. Indeed, the CCP seeks a dominant position in the use of big data that will ensure its long-term power goals; power accrues to those who can collect and analyse big data.

No matter who wins the forthcoming US election, China will be the elephant in the room. As China rapidly rewrites international rules to better reflect its desires, it is hardly surprising that others will respond by protecting their own interests. Already, a geostrategic and military alliance is being worked out. Looking ahead, a space alliance among QUAD members may also become feasible. However, Quad members and many others face a key decision: whether to have difficult conversations about and with China, or hope that win-win outcomes can still be achieved by effective diplomacy and mutually beneficial trade relations. Unfortunately, the latter requires pretending nothing has changed.