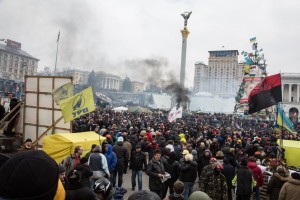 By Irene Kovalchuk and Matthew Michaelides

During the last year Ukraine has accelerated its transition toward democracy, started reforming its institutions, and introduced a package of anti-corruption laws. Nevertheless, the expelled ex-president, Viktor Yanukovich, accused of stealing billions from Ukraine and overseeing mass killings of civilians, has not been brought to justice. Only a small fraction of the equivalent of billions of dollars stolen by the “Yanukovich family” has been frozen.[1] At the same time, with mounting debts, the government needs the lost money more than ever. And Ukrainians will not have full faith in their new government without seeing those guilty of crimes punished.

Domestic and international actors must work diligently both to recover the government’s stolen assets and ensure that the level of government corruption witnessed under Yanukovich’s rule are never repeated. This would require effective cooperation among the Ukrainian government, the nation’s civil society and Western nations. But the consequences of insufficient action would be too costly for a country already under severe stress.

First, the Ukrainian General Prosecutor’s Office of Ukraine (GPO) needs to expedite corruption investigations and bring criminal charges. While the GPO has opened some criminal cases against allegedly corrupt former government officials –an example is the Ukrtelecom case – other actions remain to be taken.[2] For instance, the GPO would benefit from increased cooperation with Western colleagues. The European Union is considering dropping sanctions on some of the 22 individuals accused of misappropriating funds because of a lack of legal documentation.[3] Adequate cooperation, particularly submission of pertinent evidence to the relevant officials, would prevent the E.U. from prematurely dropping the sanctions. Finally, the assets still in Ukraine that corrupt officials stole should be transferred to the Ukrainian government for temporary holding pending investigations and trials.

Second, the government should strengthen its efforts to combat corruption in the long-run. Thus far, the Ukrainian parliament has already taken strong steps, including creating an anti-corruption bureau, allowing in-absentia conviction of corruption officials who have fled the country, and forcing disclosure of information about beneficiaries of legal entities and owners of real estate.

But the government must remain vigilant to defend against efforts to reduce the organization’s independence. On the night before the bill authorizing the anticorruption bureau was approved, members of the previous parliament introduced amendments to undermine its independence. Although the parliament’s Committee on Corruption has recently introduced a bill to correct this, anti-corruption measures have been diminished by these actions. Going forward, the bureau’s director must be selected in a transparent and unbiased way and the body begin functioning as soon as possible.

Third, the parliament and law-enforcement agencies must improve cooperation with civil society by sharing information about investigations. The government could begin by opening hearings of the parliament’s Committee on Corruption to the public. In addition, it should increase legal protections for third-party actors, such as civil-society leaders and investigative journalists, to remove barriers to uncovering government corruption.

Thus far, civil-society organizations such as the Anti-Corruption Action Center have launched Web sites to expose corruption and aggressively follow the trail of funds stolen by ousted Ukrainian politicians. They’ve also helped initiate regular inspections of officials’ integrity. And most recently, Interpol announced yesterday that it had placed former president Yanukovych on its global wanted list for embezzlement.[4] These initiatives put these organizations in a position to offer rigorous oversight of the country’s ongoing corruption challenges. However, these groups have limited resources. Western countries should offer systematic support of Ukrainian civil society, including non-government organizations, investigative journalists, civic activists and mass media, to help. Conferences, training, grants, the exchange of experience and other types of collaboration would enhance civil society in Ukraine.

Western powers can also help the Ukrainian government by increasing pressure on the nation’s elite to support reforms. Western governments should consider tightening controls on the elite’s financial accounts, transactions and property abroad, as well as updating travel policies. While the E.U. and the United States have imposed sanctions on members of corrupt former government officials, they should increase the scope of these sanctions — for example, by adding visa bans.

For example, the Russian insurance company Sogaz was 51 percent owned by Abros, a wholly owned subsidiary of Bank Rossiya, while Yanukovich was president. However, by the time that sanctions were imposed, Abros’s stake had shrunk to below 50 percent, letting it escape the E.U. measures.[5]  The Е.U.  should tighten its sanctions to encompass all organizations managed by corrupt individuals.

In the months ahead, Ukraine must work to introduce accountability into government, both in prosecuting criminals associated with the Yanukovich regime and through establishing effective state institutions. Doing so will require a concerted effort from the government, civil society and the international community.

Irene Kovalchuk has worked as Senior Associate for Debt Capital Markets and Investor Relations at Alfa Bank – Ukraine. She holds an MBA from Seattle University and a Master’s from Kyiv National Taras Shevchenko University. Matthew Michaelides is Editor of the Journal of Political Risk and a Research Assistant at Corr Analytics. JPR Status: Editorial, archived 1/18/2015.