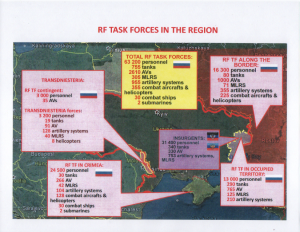 This official document obtained by Corr Analytics reveals the force structure of Russian military personnel and equipment in and around Ukraine, including in Russia, Ukraine, and Transniestria.

The released document shows the locations of forces, including in the Donbas region of Eastern Ukraine, Crimea, Russia near the Ukrainian border, and Transdniestria.  Of particular interest are Russian-flagged forces shown to be in the Donbas region, including 13,000 personnel, 290 tanks, 765 armored vehicles, 125 multiple-launch rocket systems, and 210 artillery systems.

The army arrayed against the Ukrainian military is clearly a powerful Russian force that surrounds the country. Yet, Ukrainian officials yesterday were optimistic about a Ukrainian win against Russia. Russian foreign reserves are running low and being burned at a remarkably high rate. The United States, United Kingdom, and Canada have finally broken with France and Germany, and put military advisors in Ukraine. Ukraine expects to receive Javelin anti-tank missiles, sophisticated artillery equipment, and other military assistance in the near future.

Ukraine will accept conditions imposed by the IMF for a $17.5B loan in the coming days. This will cause social unrest in Ukraine, according to officials. Ukrainian citizens are expected to denounce such conditionality when the country is at war. Russian intelligence will likely take advantage of such unrest, according to the officials. However, Ukraine will accept the conditions in order to maintain unity with its allies and to obtain the much-needed loan.