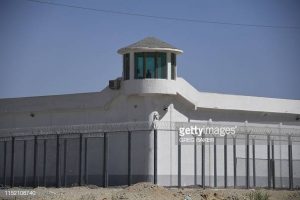 This photo taken on May 31, 2019 shows a watchtower on a high-security facility near what is believed to be a re-education camp where mostly Muslim ethnic minorities are detained, on the outskirts of Hotan, in China’s northwestern Xinjiang region. As many as one million ethnic Uighurs and other mostly Muslim minorities are believed to be held in a network of internment camps in Xinjiang, but China has not given any figures and describes the facilities as “vocational education centres” aimed at steering people away from extremism. (Photo by GREG BAKER / AFP via Getty Images)

On the surface, the Hong Kong Democracy and Human Rights Act and the Uyghur Human Rights Policy Act seem similar. Both condemn oppression in the People’s Republic of China and declare that American values of human rights, democracy and religious freedom are the proper norms on which Beijing’s actions will be evaluated. Violation of these standards will bring sanctions against those held responsible and could affect how the broader relations between the PRC and the U.S. will be conducted going forward.

The situations in the Hong Kong Special Autonomous Region and the Xinjiang Uyghur Autonomous Region (East Turkistan) are different as are particular measures in the two bills. The legislative efforts are, however, united in a common concern seen on both sides of the aisle. Americans cannot look askance from what happens in China without betraying their own values.

The U.S. interest in Hong Kong’s autonomy, prosperity and liberty (all seen as interconnected) goes back to the United States-Hong Kong Policy Act of 1992 which states “Support for democratization is a fundamental principle of United States foreign policy.” The British turned Hong Kong back to China in 1997 after governing the city since 1847. Though Hong Kong was not a democracy, it became one of the great cities of the world due to the culture of freedom and Western values conveyed by the British. In 1984, when London and Beijing negotiated Hong Kong’s future, the Chinese pledged that “The current social and economic systems in Hong Kong will remain unchanged, and so will the life-style” for 50 years. The British hoped that in another half century, the Communist regime would reform itself in positive ways, even perhaps out of existence. Unfortunately, as Hong Kong nears the half-way point of this special status, Beijing seems more of a threat than ever before. Under the arguably megalomaniac General Secretary Xi Jinping whose “China Dream” is to wield dominant global power by 2049 (the centennial of the Communist takeover), the “one country, two systems” balance will end with the rule of just one system, communism.

The Hong Kong bill, which passed by a nearly unanimous bipartisan vote in Congress (there was only one “no” vote in the House and none in the Senate) and signed by President Donald Trump, seeks to deter a breakdown of the “two systems” agreement and protect basic human rights in the city. There are good reasons for Hong Kong demonstrators to wave American and British flags, which they are doing in spades.

The situation in East Turkistan (Xinjiang province) has not gotten as much attention in the past months as has Hong Kong even though the dire situation there is of much longer duration. The Communist regime has ruled there since winning the civil war in 1949.

China is a classic example of the theory of internal colonization. This theory looks at how different racial and ethnic groups are subjected to forms of oppression forced upon them by a dominant group in society. In China, the oppression comes from two sources: Han racism and communist ideology, the latter containing a virulent hatred of all religion. The brutal use of internal colonialism should warn those outside China of how the regime will address different people and cultures if it expands its influence or engages in outright imperialism as it is starting to do.

Oppression has been common in East Turkistan since its occupation, including an effort to eradicate the culture of the region by the massive migration of Han Chinese into Xinjiang until today the Uyghur are a minority in their homeland. Conditions have grown more violent and brutal in the last three years as General Secretary Xi has consolidated his power and become obsessed with “separatism” in Tibet, East Turkistan, Hong Kong and Taiwan as well as any signs of dissent in any part of society. Taiwan has been outside Beijing’s jurisdiction for all but four (1945-49) of the last 126 years and has developed its own identity with a free spirit totally at odds with the mainland. This has not stopped Xi’s regime from threatening a war “at all cost for national unity.”

Beijing’s approach to the internal colonization of the three regions within its domain has common characteristics. Suppression of religion and the destruction of native art and architecture, libraries and cemeteries have been practiced in both Tibet and East Turkistan. Chen Quanguo, who in 2016 became Communist Party Secretary of the Xinjiang Uyghur Autonomous Region (XUAR) had previously been the party secretary of the Tibet Autonomous Region (TAR). He was known in Tibet for instituting greater policing and surveillance, so was the natural choice to lead the “Strike Hard against Violent Extremism” campaign in East Turkistan under the direct orders of General Secretary Xi. Chen is also a member of the 19th Politburo of the Communist Party of China, so there is no question that the establishment of the concentration camps that have imprisoned over a million Uyghurs and other Turkic Muslims has come from the very top of the regime.

Beijing claims the camps are for reeducation and vocational training, but reports from neutral observers, statements from victims and leaked state documents detail torture and horrendous prison conditions. Beijing cites terrorism and religious extremism as the reasons it has resorted to such massive incarceration, or as Chen has declared “round up everyone who should be rounded up.” There have been some terrorist attacks in Xinjiang, but nothing on the scale as seen elsewhere in the world. And Beijing boasts that there have been no attacks in the last three years. It is a dangerous sign that the same rhetoric about terrorism and reeducation used in East Turkistan is now being directed at Hong Kong.

The only violence on a par with 9/11 has been conducted by the Chinese authorities. The campaign in East Turkistan rivals in bloodshed the Tiananmen massacre where thousands of pro-democracy students were killed by the People’s Liberation Army in Beijing in 1989. In response to Tiananmen, President George H.W. Bush suspended the sale of arms and other equipment to China that could be used for oppression. President Trump has done the same following revelations about East Turkistan. Congress followed Bush’s lead and passed legislation enforcing his ban, and the House has added language to the Uyghur Human Rights Policy Act blocking the transfer to China of “any machine learning, pattern recognition, artificial intelligence, quantum computing, or biometric technology” that would “facilitate the mass arbitrary detention of Turkic Muslims.” Unfortunately, this ban was not in the Senate version of the bill which was passed first, so the two versions of the bill will need to be reconciled. This would not seem to be a serious problem because both bills passed their respective chambers in the same way as the Hong Kong bill did (with only one dissenting vote in the House). However, with time running short before the long holiday recess, if action is not taken immediately it could be months before the bill could become law and go into effect. The Senate should adopt the House language by unanimous consent and send the bill to President Trump before Christmas.

The actual sanctions in the Uyghur bill are essentially the same as in the Hong Kong bill, meaning both are weak. They target individual Chinese officials for their abusive acts; in the Uyghur bill, those “responsible for mass incarceration, political indoctrination, or reeducation efforts.” Chen is specially named in the bill. Yet, these officials are only following orders from the top of the regime, which is not targeted. The editor of Global Times, the media outlet of the Chinese Communist Party, has tweeted that officials will look at sanctions “with scorn.” Their assets are beyond American reach in most cases, and does anyone think they will change their outlook or defy Beijing’s orders just so they go on vacation to Disneyland? The paper itself has stated “This is an intervention bill, but only a paper tiger without one particular lever that can actually impact the governance in Xinjiang.” To have real impact, sanctions should hit China itself with sufficient force to affect policy decisions at the top. It should be noted that Beijing is threatening just this kind of retaliation against broad sections of the U.S. economy.

The Uyghur bill does state that  “United States policy toward the People’s Republic of China should be explicitly linked with the situation in China’s Xinjiang Uighur Autonomous Region” with specific references to the need to close the concentration camps, release political prisoners and cease the campaign against religious freedom. This leaves the door open to the imposition of stronger sanctions if Beijing continues its oppressive policies.

Such a wider approach will, however, draw criticism from those who think they can profit from supporting China’s rise. Even in the immediate aftermath of Tiananmen, President Bush vetoed a bill which tied trade to China’s human rights, economic, and proliferation policies. The House overrode the veto but the Senate did not. The leader who had ordered the troops to fire upon the students was Deng Xiaoping, famous for saying “To get rich is beautiful” and inspiring many to believe reform was on its way in China. Bush thought betting on reform and economic ties expressed “realism” compared to concern for human rights. Thirty years later, we see how China’s riches have been used not just to build beautiful skylines but also sleek new fighter jets, warships and hypersonic missiles that menace the entire Pacific Rim and beyond. Nothing can be more unrealistic than to ignore the true nature of a foreign rival when it reveals itself in such stark terms as a blood-soaked dictatorship.

It is fully legitimate for the U.S. to impose sanctions, including substantial restrictions on trade, because Washington is under no obligation to Beijing to provide the regime with supplies, money or other resources used to carry out policies that are affronts to American values and threats to its national security interests. Beijing claims its sovereignty allows it to do whatever it wants. The same right belongs to Washington as well; and morality tilts the scale in America’s favor. The Uyghur Human Rights Policy Act deserves to be enacted and implemented immediately.

William R. Hawkins is a consultant specializing in international economic and national security issues. A former economics professor, he has served on the professional staff of the U.S. House Foreign Affairs Committee.