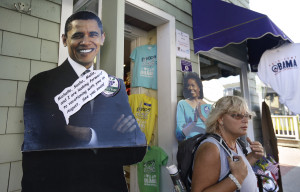 A passer-by, right, departs a store that features cut-outs of President Barack Obama, left, and First Lady Michelle Obama, center, Saturday, Aug. 9, 2014, in Oak Bluffs, Mass., on the island of Martha’s Vineyard. President Obama and his family are returning to the island off the Massachusetts mainland Saturday. The president is doing something unusual with his summer vacation on Martha’s Vineyard: He’ll come back to Washington midway through the getaway to attend White House meetings. (AP Photo/Steven Senne)

Critics from all sides of America’s political spectrum are either angry or exasperated over President Obama’s handling of foreign policy. Major U.S. newspapers, including those that endorsed his presidency, have recently published scathing editorials about how weak U.S. leadership has become. In the face of unfolding international crises, Western allies are forced to take a stance ahead of the President, sensing a lack of U.S. leadership and resolve that used to be the hallmark of American power in the world. U.S. leadership has come to mean mobilizing the coalition of nations, lending credence to the phrase “leading from behind.”

President Obama’s foreign policy is enmeshed in self-contradictions. His worldview that nation-building must begin at home emboldens him to pursue his domestic agenda over foreign engagements abroad. Yet, erupting global crises are forcing America to get involved, as beleaguered nations look to the U.S. for assistance and support. Ironically, this seeming withdrawal from world affairs has given rise to the very crises that the White House has been seeking to avoid: a smoldering civil war in Iraq and Syria; an uncertain future in Afghanistan as the Taliban are poised to take over the country as soon as the US military transitions out; a defiant Russia providing military support to rebel groups in Crimea; a belligerent China that is encroaching upon disputed territories in the South China Sea; and an Israel-Hamas conflict that seems to have no resolution in sight. It seems that the more we disengage, the more troubled the world becomes. Ironically also, the United States’ disengagement coincides with the worldview held by radical insurgent groups and communist governments alike that are seeking to undermine the present world order: America should not interfere abroad. And so we don’t.

The President’s insistence that diplomacy must come before military engagements, as clearly spelled out in his West Point speech, seems to be the underlying thread that connects these crises. During his trip to Manila, he laid bare his angst about military approaches in conflict-resolution: “Why is it that everybody is so eager to use military force after we’ve just gone through a decade of war at enormous costs to our troops and to our budget?” Meanwhile, sequestration programs and defense cuts are underway.

This new sense of isolationism, whether conscious or unconscious, seeks to reverse previous America’s expansionist involvements abroad. As Peter Baker puts it:

Isolationism is not just an aversion to war, which is an altogether healthy instinct. It is a      broader reluctance to engage, to assert responsibility, to commit. Isolationism tends to be pessimistic (we will get it wrong, we will make it worse) and amoral (it is none of our business unless it threatens us directly) and inward-looking (foreign aid is a waste of money better spent at home).

As a justification of this new way of thinking, the White House and its supporters argue that the war-weary American public is on their side. Indeed, last month’s New York Times/CBS News poll showed that while 58% of Americans disapproved of President Obama’s handling of foreign policy, they also did not want him to involve the country in wars in places like Ukraine and Iraq, “suggesting that he is more in touch with a broader public desire for disengagement than many of his critics even though his leadership is in question,” says the author. This week’s WSJ/NBC poll yielded the same results, with 60% disapproving the President’s foreign policy handling, but with Americans in large numbers wanting the U.S. to reduce its role in world affairs.

But to allow the democratic pulse to inform and shape foreign policy is to misread the nature of world affairs and the conduct of nations. Foreign policy cannot be managed by polls, because it runs on different currencies, namely, power and obligation. As a superpower, the United States must be able to wield power and demonstrate capabilities that can effect desired outcomes. As Putin amasses troops along the Ukrainian borders and Xi Jinping sends patrol boats to stake China’s claims on disputed islands in the East and South China seas, hope and goodwill cannot persuade these tyrants to do what is right for the smaller powers in their neighborhoods. Likewise, expecting Afghanistan, Syria, and Iraq to determine the course of their fate betrays a lack of understanding about the political, economic, and social restrictions that prevent the flourishing of political and economic freedoms in those troubled, fledgling states.

But power comes with obligations. What differentiates the United States’ use of power is the fact that it is tempered by a sense of obligation to do what is right in the world, to clean up the “’mess’ of geopolitics and prevent regional conflicts from becoming wider wars,” says former Senator Joseph Lieberman. He adds, “it is at just such times when it is most important to get involved, to take sides, and make clear that we know who our friends and foes are—and that we will stand with our friends and against our foes.” Congressman Randy Forbes argues for the same thing when he says that America is the backstop to freedom.

Winston Churchill demonstrated the role of power and obligation during his reign as Prime Minister of an imperial British Commonwealth. He saw foreign engagements as just endeavors because they provided opportunities with which “to lift the human life away from barbarism and savagery towards civilization and human excellence.” In defending the British Empire, Churchill believed that foreign ventures could also provide opportunities for an imperial people to improve themselves: “Ruling its empire justly further civi­lizes an imperial nation. At its best, empire is not a burden to be endured but an opportunity for individual and national self-improvement.”

Professor Kirk Emmert, in his book, Winston S. Churchill on Empire, argues that Churchill’s views on foreign engagements were based on his not so democratic view of the political and moral order:

The democratic view insists upon the primacy of rights, the imperialist upon the primacy of obligations; the democratic elevation of freedom and individualism contrasts with the imperial stress on virtue and man’s political nature; the highest purpose of modern democratic government is to encourage the private pursuit of happiness and the source of its legitimacy is popular consent; the purpose of an imperial government is to promote civilization, and “intrinsic merit” is its title to rule.

When the United States is confronted with global crises — a fleeing minority group hunkering on a mountaintop somewhere in Iraq, dying of thirst, or women being stoned to death for not living up to the “moral standards” of religious extremists, or beleaguered nations and peoples trying to defend their rights to exist against terrorists and tyrants – Americans know that their country has to get involved. Only with moral clarity about its sense of mission, its principled use of power, and a sense of duty that honors its obligations abroad will the United States maintain its status as the world’s lone superpower.

Priscilla Tacujan, PhD is an independent consultant associated with Corr Analytics Inc. She holds a PhD in political science from Claremont Graduate University and spent a year in Afghanistan working as a social scientist. JPR Status: Editorial, archived 8/10/2014.