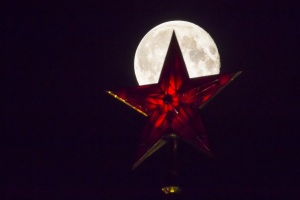 The supermoon rises behind a Red Star atop of a Kremlin Tower at Red Square in Moscow, Russia, Monday, Aug. 11, 2014. The phenomenon, which scientists call a “perigee moon,” occurs when the moon is near the horizon and appears larger and brighter than other full moons. (AP Photo/Alexander Zemlianichenko)

The impact of history leaves an indelible handprint upon the construction of ideational beliefs. With the fall of the Soviet Empire in East and Central Europe, there was a mixed sense of jubilation among disparate peoples of the post-Soviet space. Former US National Security Advisor, Zbigniew Brzezinski, rightly stipulates that the disintegration of the Soviet Union “created a black hole in the center of Eurasia,”[1] and today’s post-911 world continues to endure the multifarious impact of this transitional paradigm. Undoubtedly, the dismemberment of 27,000 nuclear arms, three freshwater fleets, and four million men in arms was and chiefly remains a psychosomatic and socio-economic challenge of the highest degree.[2] Although Kremlin observers debate the extent to which Russian decision-making is conceptualized solely by the Kremlin, it is blatantly clear that Vladimir Vladimirovich Putin and his inner-coterie have not come to grips with the loss of largess via the Soviet legacy.

Russianists have proposed a number of explanations to dissect Russian near abroad strategic thinking; however, a principle shortcoming remains—the extent to which past experience can color present elite thinking. Indeed, today’s globalization literature and neo-liberal economists collectively underestimate the import of the past as a driver informing relations among states. The question remains: what principally drives history—economics or a hierarchy of needs? Moreover, what are Putin’s personal goals, and how should the West respond in kind? Putin is well aware that the “history of most civilizations is a tale of the rise and fall of empires,”[3] and the Russian goal has been and remains to reconstitute Russia’s self-esteem. Red Square parades, the burgeoning of Russia’s military capacity, as well as bomber flights near American interests and territory, are all examples revealing Putin’s Russia resurgent dream. By forming closer ties to China—and not necessarily an historical certainty—Putin hopes to offset America and the unipolar world order. Specifically, 2008 Georgia and 2014 Ukraine are laboratories within which Putin practices his surgical statecraft techniques. He cuts forward and sews back, but the Russian leader never leaves the pliant patient behind. Whilst brute force, the threat of invasion, and pipeline politics are the lifeblood of Putin’s regime, realist calculations and economics alone cannot explicate Putin’s stratagem for the world as well as post-Soviet Ukraine.

Russia’s involvement in Ukraine both envelops and transcends Ukraine—it has global “soft-power” implications.[4] The triumphalist Fukuyama in his The End of History is outmoded and fails to encapsulate our time.[5] The West and Russia—to the East—(including China) are engaged in an inaudible cultural Cold War à la survival of the fittest. Collectivism versus individualism, freedom versus tyranny, security versus privacy, and nineteenth century realism versus free trade organizing, are the battle zones of today.  Henry Kissinger is chiefly correct in that, “every age has its leitmotif, a set of beliefs that explains the universe,”[6] and it is high noon for Washington’s planners to recognize that the fight for Ukraine is also a morals contestation between West and East. Although challenges in American society are many, and despite the fact that mistakes have been and will continue to be made, the United States and Europe must retake their place as the breadwinners of freedom and democracy. Undoubtedly, free association, freedom from tyranny, and the chance to live in a liberal society (although in practice imperfect) are values worth retaining. Whilst the West can and should learn from the East, the West cannot sacrifice its core foundational principles in an attempt to placate a predominantly collectivist East. Czech Dissident Jiří Klobouk’s words ring true:

Rhoads Cannon is the founder of TBT Consultants. He holds master’s degrees from the University of Oxford and the London School of Economics. Dr. Anders Corr provided editorial oversight for this article. JPR Status: Editorial, archived 11/16/2014.

[1] Dmitri Trenin, The End of Eurasia: Russia on the Border Between Geopolitics and Globalization (Carnegie Endowment for International Peace, 2002), p. 11.

[3] Henry Kissinger, World Order: Reflections on the Character of Nations and the Course of History (Penguin Press, 2014), p. 11.

[6] Henry Kissinger, World Order: Reflections on the Character of Nations and the Course of History (Penguin Press, 2014), p. 330.