The People’s Republic of China (PRC) Ministry of Defense representative reportedly stated at this week’s Munich Security Conference that the PRC now interprets the United Nations Convention on the Law of the Sea (UNCLOS) as stating that naval forces are forbidden to operate in a coastal state’s Exclusive Economic Zone (EEZ) without said state’s prior permission.

This raises the question of why Beijing has now come to this “enlightened” position? Where was the PRC since 1949 as US Navy warships peacefully sailed the waters of the South China Sea over the past 70 years? Or where was the PRC from 1972 to 1982 as China participated in the American-led effort to craft and ratify UNCLOS? More importantly, why did Beijing not complain of US Navy operations in the South China Sea in 1996 when the PRC ratified UNCLOS?

Why is the PRC now making this an issue? I think the answer is very easy to understand. After nearly 20 years of the most robust naval modernization since WW II, the PRC now believes they have a big enough and capable enough Navy and Maritime Law Enforcement force to back up their sovereignty claims to the entirety of the South China Sea. 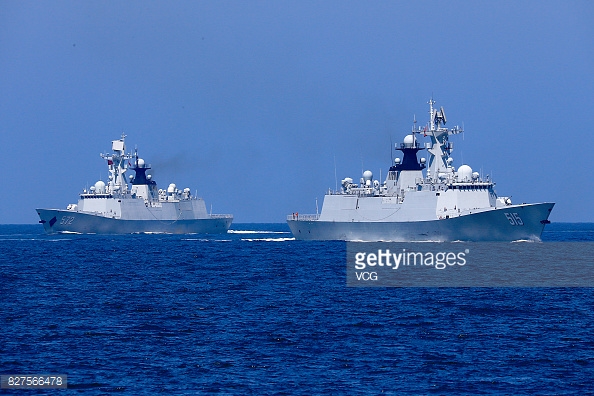 As such, the world is silently witnessing the biggest territorial acquisition in the post-WW II era. The PRC’s annexation of the South China Sea (taken over a series of years) is larger than Russia’s forcible acquisition of the Crimea and the Donbas region of eastern Ukraine. Both are actions of naked and violent expansionism by two totalitarian dictatorships.

The U.S. Government is challenging the PRC’s effort to re-interpret UNCLOS by deploying the USS Carl Vinson Carrier Strike Group for operations in the South China Sea this month and next with port calls in the Philippines and Vietnam. What is also needed is an information campaign that highlights our actions and reminds the Chinese Communist Party (CCP) that no matter how they try and twist international law or conduct their influence campaigns, that they cannot change history and will not be successful in taking control of the South China Sea.

Regardless of the statements from the PRC’s Ministry of Defense, UNCLOS does not prevent warships from any coastal state from being allowed to sail in international waters on the high seas or in an EEZ outside of the 12 nm territorial limit, especially in a disputed area like the South China Sea. China knows this, but is purposefully trying to rewrite history and international law to justify their illegal effort to acquire the entirety of the South China Sea and thus have control over 1/3 of the world’s global shipping volume. It won’t work, but the U.S. Government needs a sophisticated counter-influence campaign to publicly expose Beijing’s devious behavior.

Secretaries Tillerson and Mattis should speak up and against the PRC’s statement in the international press. Now more than ever, we need a tough public stance against China’s creeping expansionism.

James E. Fanell (Capt., USN, Ret.) is a Government Fellow with the Geneva Centre for Security Policy. He was previously the Director of Intelligence and Information Operations for the U.S. Pacific Fleet and a National Security Affairs Fellow at the Hoover Institution at Stanford University. JPR Status: Opinion.