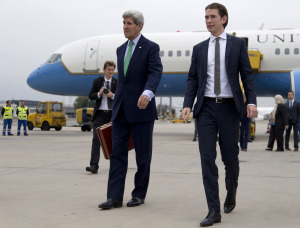 Iran wants at least 7,000 centrifuges for its uranium enrichment capacity, it made clear in negotiations with the United States and other members of the United Nations Security Council and Germany (the P5+1). Iran is currently spinning only 10,000 of its 20,000 centrifuges, and thus a drop to 7,000 centrifuges would not significantly slow its current rapid progress towards nuclear weapons capabilities. The current negotiations are hinging on a dispute between Iran, which wants at least 7,000 centrifuges, and the P5+1, which wants a limit of of 4,000 Iranian centrifuges.  Also impeding an agreement is that Iran is suspected to have already tested a nuclear weapon device, and has not agreed to an International Atomic Energy Agency (IAEA) request for full monitoring and verification, including at its nuclear military site in Parchin.

The Journal of Political Risk received this information during an exclusive interview with a reliable official source on Wednesday October 23. JPR could not verify the official’s information, since the official requested anonymity. The official followed up with a detailed explanation, quoted below.

“1) Iran has agreed not to enrich uranium above 5 percent as defined in the Joint Plan of Action ( signed on 24 November 2013).

“3) Iran wants to keep no less than 7,000 centrifuges for its uranium enrichment capacity.

“4) Iran has not yet agreed to an IAEA full monitoring and verification plan.

“5) Iran was suspected to have conducted a test on a nuclear weapon device in Parchin.”

The official noted that “Parchin is, and has always been, one of the key aspects of the Iranian nuclear issue, the potential military dimension of Iran’s nuclear program. The very fact that Iran has not allowed IAEA to inspect the site shows that Iran has not been fully transparent about its intentions. Parchin is not just a rumor, it is more than that!”

The official mentioned that the current negotiations are at a critical point. “It will become clear soon whether we will have a deal or not,” the official told the JPR.

Important pieces of information newly revealed by the official include the Iranian demand of no less than 7,000 centrifuges, the P5+1 offer of 4,000 centrifuges, and that there are only 10,000 centrifuges currently spinning (of 20,000 total constructed by Iran). Another important revelation is that there is no full IAEA verification in the agreement thus far. The possible nuclear weapon device test at Parchin is also key information, strengthening past reports. A major additional problem with the possible agreement, reported elsewhere, is that control of Iran’s missile technology is not on the table. Iran refuses to budge on their continued development of long-range missiles capable of carrying a nuclear payload.

The potential deal between Iran and the P5+1 is clearly a bad one from a nonproliferation standpoint. But the longer the negotiations and sanctions last, the closer Iran is to a nuclear weapon, and the stronger is Iran’s bargaining position. Only 7,000 centrifuges are better than 10,000 currently spinning, but the holes in the agreement — including lack of verification — will not play well to voters in the United States and Israel. Thus Republicans and Israel will lambaste a deal at either 4,000 or 7,000 as weak, and they will be right. But the P5+1 does not appear to have a better option. The only effective option against serious proliferators like North Korea and Iran is probably a military option, and voters don’t want the associated expense and risk right now. For this reason, North Korea, Pakistan, India, and other countries have all obtained nuclear weapons and over time, slowly achieve at least some degree of normalcy in their international relations. Iran appears to be successfully traversing a similar path.