In 1971, the U.S. started holding international naval exercises in Hawaii, and called them RIMPAC (Rim of the Pacific). We invited our closest allies to participate. Now, the U.S. Navy is inviting not only allies, but Russia and China as well. Since a brief thaw in the 1990s, Russia and China are increasingly acting as adversaries rather than responsible international partners to the U.S. Most recently, China seems to have helped rather than stopped North Korea’s nuclear ambitions. It is time to invite Taiwan, not China, to RIMPAC. 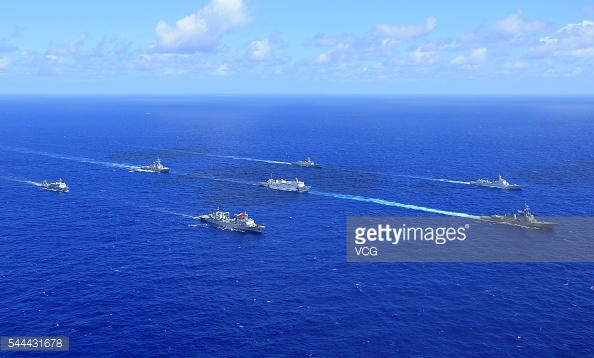 Aerial view of a navy fleet with five Chinese navy warships and two America navy warships which head to Hawaii for the 2016 Pacific Rim (RIMPAC) on June 25, 2016 in the western Pacific Ocean. A Chinese navy fleet, including five ships (the missile destroyer Xi’an, the missile frigate Hengshui, the supply ship Gaoyouhu, the hospital ship Peace Ark, the submarine rescue vessel Changdao), three helicopters, a marine squad and a diving squad with 1,200 officers and soldiers, set sail from Zhoushan to Hawaii to join the RIMPAC 2016 on June 15. It is the second time that Chinese navy has participated in RIMPAC, a multilateral naval exercises led by the USA and held every two years. (Photo by VCG)

The U.S. should gradually remove the economic, political, and military cooperation we have extended to China since our diplomatic opening to the country in 1972. This should include a disinvitation to RIMPAC, especially since the authoritarian country increasingly uses these naval exercises to send uninvited intelligence-gathering ships. On July 22, Australia announced that it had discovered a Chinese spy ship monitoring its own naval exercises with the U.S.

One way to put China on notice while at the same time rewarding our ally Taiwan is to invite this democracy to the exercises. In the past, China has hurt its image by attempting to disrupt international fora where Taiwan participated. China sees Taiwan, a high-GDP per capita functioning democracy, as a renegade province and threat to its own legitimacy. Inviting Taiwan would therefore be an elegant half-step, and warning of, a potential disinvitation to China. If China refused to participate in RIMPAC as a result, so be it.

According to an article by Captain James Fanell (U.S. Navy, retired), inviting China to RIMPAC at this point in its history, while it is becoming ever more authoritarian, is “appeasement.” Mark Stoke, Executive Director of the Project 2049 Institute, said, “the best way to disinvite the CCP [Chinese Communist Party] Navy is to invite the ROC (Taiwan) Navy to participate in RIMPAC as observers.” The Chinese Embassy in Washington D.C. did not reply to a July 19 request for comment.

The U.S. House of Representatives version of the 2017 National Defense Authorization Act (NDAA) did include an invitation to Taiwan to participate in RIMPAC. Congressman Mark Walker (R-NC) sponsored the provision, which requires the Department of Defense “to grant observer status to the military forces of Taiwan in any maritime exercise known as the Rim of the Pacific Exercise.” Representative Walker’s communications’ Director, Jack Minor, said,

Walker’s amendment to invite Taiwan to RIMPAC was adopted and passed out of the House of Representatives, but was unfortunately not included in the conference version of the [2017] National Defense Authorization Act (NDAA) that was negotiated by members of the House and Senate. While Walker was disappointed, we introduced an amendment this year to study bilateral ports of call between Taiwan and the United States. Walker believes Taiwan is a vital defensive partner in southeast Asia and that the United States should look into the feasibility of exchanging ports of call with Taiwan.”

This year’s House version of the bill passed on July 14, but does not include the language on inviting Taiwan to RIMPAC. It does include a section which states, “the United States should seek opportunities for expanded training and exercises with Taiwan.” President Trump should take the lead on rewarding our friends in Asia and sending signals to China, which is increasingly acting counter to U.S. interests, democracy, and international law. One great way to do so would be to invite Taiwan to the next RIMPAC.