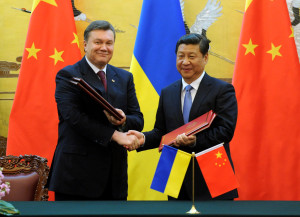 According to two independent JPR sources, Ukrainian President Viktor Yanukovych, left, deposited billions of dollars before and during his departure from Ukraine in the spring of 2014.

Former President of Ukraine Viktor Yanukovych has deposited billions of dollars with the Chinese, according to two independent sources available to the Journal of Political Risk.

The other source, which we accessed in April 2014 on a visit to Ukraine, said that President Yanukovych transferred most of his deposits to China prior to departing the country and closing the banks with which he was associated. His bankers fled the country at that time.

When President Yanukovych fled Ukraine for Russia in February 2014, he transferred billions of dollars in a hurry. He and his family closed their four banks, according to our source. President Yanukovych’s men stuffed several vehicles full of cash, and drove them to Russia. What is reported here for the first time is that most of his estimated $32 billion in assets were wired to China, according to our source.

Update (3/7/2015): An email request for comment to the People’s Bank of China was not returned. The JPR was unable to reach Viktor Yanukovych for comment, though he is thought to reside in Rostov-on-Don, Russia