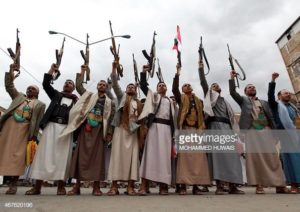 The disproportionate nature of such “punishment” would also fall upon the United States and its other allies in the region. If implemented, the Senate resolution would swing the war in Yemen in favor of Iran’s proxies. The strategic importance of Yemen is obvious to anyone who looks at a map. Can anyone seriously argue that the Saudis do not have a security concern regarding who controls a country on their border? Especially if that ruling group was allied with Iran, an existential regional and religious rival? The Houthi rebels have fired over 200 rockets and missiles into Saudi Arabia. The reason the U.S. supports the Saudis is that they are the frontline state opposing Iranian aggression. And it is nice to have an ally who will fight.

Senate passage of the resolution has been dismissed by some because it is only a resolution not a bill. It is not binding and thus only symbolic. Yet, the symbolism is very perilous for the future conduct of U.S. foreign policy and the reliability of America as the leader of alliances and coalitions formed against common enemies like Iran.

The unjustified remorse over Khashoggi was used by Republican libertarians and Democratic leftists in the Senate to advance a pro-Iranian slant long in the works. Senator Rand Paul (R-KY), nominal leader of the libertarians, introduced legislation with Democratic cosponsors to cut off arms sales to Saudi Arabia back in 2016. The Democratic Senators voted as a bloc for the resolution introduced by Senator Bernie Sanders (Y-VT). Even Senators Jon Tester (D-MT) and Joe Manchin (D-WV), who won reelection in November in GOP states by claiming they were independent moderates, fell into line behind the Vermont socialist. But it was a handful of Republican isolationists who joined them that produced the 54-41 majority on final passage. The core of this group consists of Senators Steve Daines (MT), Jeff Flake (AZ), and Mike Lee (UT), who cosponsored Sander’s resolution. Republicans Jerry Moran (KS), Rand Paul (KY), Todd Young (IN), and Sue Collins (ME) also voted for the resolution. Senator Collins’ situation is different, as she is a Republican in a very Blue state.

How extreme the libertarian-leftist alignment in the Senate has become was shown by two amendments that made the original resolution worse. Senator Tom Cotton (R-AR) tried to preserve the ability of the U.S. to help defend Saudi Arabia from “ballistic missile attacks, unmanned aerial vehicle attacks, maritime attacks against United States or international vessels, or terrorist attacks against civilian targets.” This was voted down 45-54. Senator Young wanted to explicitly prevent the U.S. from refueling coalition aircraft. He was supported by a vote of 58-41. No wonder Majority Whip John Cornyn (R-TX) warned that this resolution will cause friends and allies around the world to question America’s reliability.

The U.S. had already halted aerial refueling of coalition aircraft in early November. Left-wing media outlet Common Dreams reported “Anti-war groups and progressive lawmakers expressed cautious optimism” because it would weaken “Saudi Arabia’s assault on Yemen.” Of course, the Saudis are not “assaulting Yemen” but only the rebels who are trying to take over the country. But such descriptions of the conflict are typical of the left and have become common in the mainstream press and now even among some Republicans.

Coverage of the siege of Hodeida, a Red Sea port the Houthi captured in 2014, has also been one-sided. The Saudis have blockaded this port because any supplies that would land there would be used by the rebels, especially weapons and troops sent by Iran. An estimated 70 per cent of all food, fuel and medicine shipped into Yemen prior to the war came through this port. The interruption of these supplies are blamed for the starvation and disease which anti-war activists claim make Yemen the worst humanitarian crisis in the world.

There are two problems with this analysis. First, it is unlikely that if the port was open under Houthi control, there would be a sudden inflow of goods to the general civilian population. In war, the fighters always get first pick of everything as they control transport and transportation routes. They need food, fuel and medicine to sustain their war effort, along with arms and reinforcements. Of course, they would send some supplies to “their people” in the Shia villages in the hills, but these people are also critical to the Houthi war effort. It is a communal battle between the minority Shia and the majority Sunni in the country. The blockade is meant to pressure the Shia rebels to seek peace.

This is a common strategy. The Union blockaded Confederate ports during our Civil War. The Allies imposed a blockade on Germany in both World Wars (Ralph Raico, a senior fellow at the libertarian Mises Institute believes “This hunger blockade [of Imperial Germany] belongs to the category of forgotten state atrocities of the twentieth century”). The U.S. submarine campaign in the Pacific was far more successful than the German U-boats in the Atlantic in isolating the enemy.

The Saudi-led coalition was massing troops to liberate Hodeida, which would have allowed the port to reopen. Ironically, on the same day the Senate voted its resolution to weaken the Saudi coalition, a deal was struck in Sweden to call a truce around the port. All Houthi fighters are to withdraw from the port area by December 31 and all troops from both sides are to withdraw from the city by January 7. International organizations, including the UN, would then run the city, allowing imports of humanitarian aid, but not weapons.

The Saudis were able to negotiate a Houthi retreat without a costly urban battle that might have damaged the docks because they were negotiating from a position of strength. The Senate resolution will now undermine that position, making a diplomatic settlement favorable to American and Saudi interests more difficult. Negotiations between Yemen’s legitimate government and the rebels are to resume in January. The Trump Administration announced in October that it was backing a new diplomatic effort to end the war, but this was not good enough for those who don’t just want to end the war. They want to see the Saudis lose and the U.S. withdraw from the region.

The second point is that Yemen is not the worst humanitarian crisis in the Middle East; Syria is. The UN estimates about 10,000 combat deaths in Yemen, with 20,000 people depending on outside aid to survive. While pro-rebel propagandists like to inflate these figures, even their claim of 85,000 women and children killed is less than the 250,000 people killed in Syria; with millions more flooding refugee camps in Jordan and marching to sanctuary in Europe. Yemen and Syria do have something more than causalities in common. In both civil wars, Iran is backing the side that represents a minority of Shia seeking to rule over a majority of Sunni by force. As the International Crisis Group reports, “The Huthis are deft practitioners of asymmetrical warfare, trained as some of their commanders reportedly are by Lebanese Hizbollah, which steeled itself in combat in Lebanon and Syria.” Hizbollah is the terrorist group that serves as the shock army of Iran in its campaigns of aggression across the region.

The liberal approach to peace was presented by Jeffrey Feltman of the Brookings Institution for Foreign Affairs on November 26. Feltman was Assistant Secretary of State for the Near East in the Obama administration and has worked at the United Nations. He declared, “the only way to end the war” in Yemen was for Saudi Arabia “to stop its military campaign unilaterally and challenge the Houthis to respond in kind.” No one should be surprised if the Houthis reject the challenge and seize the opportunity to advance instead.

What unites libertarians and leftists is the classical liberal view of the world which jelled in the early 19th century. Feltman’s naive view is not much different than the advice the French liberal Frederic Bastiat gave to his countrymen if the Russians were to invade in 1849, “I sincerely believe that the best thing we could do would be to receive them well, to give them a taste of the sweetness of our wines, to show them our stores, our museums, the happiness of our people … after which we should say to them: Return as quickly as possible to your steppes and tell your brothers what you have seen.” As if they would withdraw after seeing such a docile conquest! History has not been kind to this ideology, yet its emotional appeal lingers on.

Looking at the opportunity afforded by a Democratic majority in the House, Kevin Martin, President of Peace Action, has said, “Congress must pass the Yemen war powers resolutions to bind the administration to this policy shift.” Martin’s group also calls for the U.S. to end its sanctions on North Korea, using the same line of argument it uses for Yemen; “It is also inhumane as North Korea is experiencing a tuberculosis outbreak which could spread in the region, and UNICEF warns 60,000 North Korean children are at risk of starvation.” What was not mentioned is that even without sanctions, millions have starved in North Korea because all available resources have gone to support the Kim dynasty’s party and army.

Senator Bob Mendez (D-NJ), also reelected as a moderate, has pending actual legislation, S. 3652, “The Saudi Arabia Accountability and Yemen Act of 2018.” Senator Young is a cosponsor. It would mandate action. As with Feltman, the bill calls on “the Government of Saudi Arabia and the Government of the United Arab Emirates, to take the lead in confidence-building measures that open space for political dialogue.” It includes a prohibition of aerial refueling, calls for an investigation into the U.S. supply of weapons to Saudi Arabia and suspends current transfers of military equipment to Riyadh. That bill, or something like it, will undoubtedly be reintroduced in the next Congress. Momentum from the passage of S.J.Res.54 and a Democratic majority in the House that would join a “bipartisan” Senate majority favoring appeasement and unilateral disarmament could lead to its passage. President Trump would almost certainly veto any such measure. Still, it would send a strong message that the ability of America to muster the unity and vision needed to lead alliances and to protect national security is in doubt.