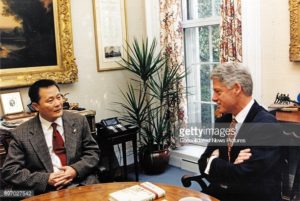 In the past year, China, the United States, and the DPRK have launched a dramatic game around nuclear weapons and trade. First, Trump used the pressure of a possible trade war in forcing Xi Jinping into participating on the economic sanctions against North Korea, so Xi could save his own regime. Little Kim became so angry that he regarded China as a millennium enemy.

Without the aid of China, Little Kim’s days cannot be long. Ever shameless as a rogue of the third generation, Little Kim began to show his better side to the United States. By arranging an Olympic show, he moved South Korean mothers to tears, and dared peace-loving people of the world to hope. But no, many naive Americans immediately prompted President Trump to promise to meet with Little Kim for peace. Even started applying for the Nobel peace prize.

The Chinese Communist Party, accustomed to using North Korea as a bargaining chip, could not abide by this. The media was instigated into satirizing Xi Jinping, saying that since when China has ever been excluded from the North Korean nuclear issue. Xi Jinping, being extremely vain, could not stomach the irritation. So these two fools conspired and banged out a fools’ agreement, (wooden mallets 棒槌, which the Chinese use to beat clothes with while washing – meaning dumb bats.) When Little Xi negotiates trade conditions with Trump, he can use whether to continue to impose sanctions on North Korea as his bargaining chips. In private, he promised Little Kim that he would stop the sanctions at opportune times so that Little Kim could survive.

There is no need for us to guess if this is true. When you see Little Kim’s smile squeezing his little eyes into even smaller eyes, you know that he has been rewarded on the “fools’ island.” After the meeting, Xi Jinping said nothing publicly, because he knew the sanctions may or may not be lifted. Little Kim went home and said that North Korea must give up nuclear weapons. Still, Xi said absolutely nothing. Obviously North Korea has been played. Even if Little Kim could bear the sanctions, North Korea could not.

Evidently, Kim Jong-un did not study in vain in the West, and he retains the daring of his Mafia family stock. Just before Xi Jinping’s special envoy (Liu He) could take the North Korea bargaining chips to negotiate with the United States, Kim Jong-un’s representative suddenly said: It may not be necessary to meet with Trump. The subtext is: I haven’t received my rewards yet, so don’t play me like a fool. This dagger is not aimed at the White House. It is a public challenge against Xi Jinping. (叫板, a musical pitch given by an opera singer, just before breaking into song, for the musicians to set their musical instruments for accompaniment – meaning the starting key to more clamoring to come.) The White House appears unperturbed.

How this opera will play out is difficult to predict, because all three presidents are masters of unpredictable moves. This time Xi Jinping has made the mistake that is often made by lousy chess players. [Xi’s] wishful thinking was that his opponent would fall into the traps he has set, while forgetting that the other party had already set him up as a millennium enemy, and therefore not so easily fooled.

This time, Little Kim appeared calm and realistic. An eagle would spread its wings if it spots its prey. But Kim declines to be the prey – as a bargaining chip for free; even if it’s for his Big Brother. Kim has to take his rewards, either from China or from the United States. If he didn’t take his rewards he might not get off this time – the Kim dynasty could collapse. The South Korean president has been embarrassingly tossed to the side. [Moon] should feel remorse for again unilaterally trying to save North Korea. After all, the number one victim of North Korea’s nuclear weapons is South Korea.

The initiative is now in the hands of President Trump. If he accepts criticism from Congress and public opinion, he would refrain from interfering with the enforcement of the law, and reject Xi Jinping’s trade negotiations. Little Xi will inevitably fly into a rage from shame, and he would shift his anger onto Little Kim. The fragile China-North Korea alliance, which has just been resumed, will be shattered anew. Trump’s diplomacy will then be like wielding a cleaver with ample skills, (游刃有余), because both China and the DPRK would seek the help of the United States in trade and economy.

If Trump were to insist on going his own way, and swallowing Xi Jinping’s bait, then Trump would be bowing to Xi Jinping for the sake of Republican’s midterm election. If so, Little Kim has no other choice but bow to Xi Jinping, too. Because to obtain the rewards of China suspending sanctions and to ensure the survival of the Kim Dynasty, he must kowtow to acknowledge his allegiance and inferiority, (俯首称臣.) The resumption of the Sino-North Korea alliance will be a huge failure for the US, Japan, South Korea, and Taiwan’s diplomacy. Russia, which is watching, will also join this alliance, thus reversing the recent pattern of international politics in Asia.

Of course, there are several other possibilities. In the final analysis, all three First Gentlemen are full of ideas, and are accustomed to dictating their ways. Often enough, there will be shocking developments that will cause the media to collectively drop their jaws. I dare not make any predictions on how this peculiar chess game will be played out.

The only thing I can say is that this chess game will determine the political and economic landscape of East Asia and the world at large for several decades to come. It will affect the fate of all of us.