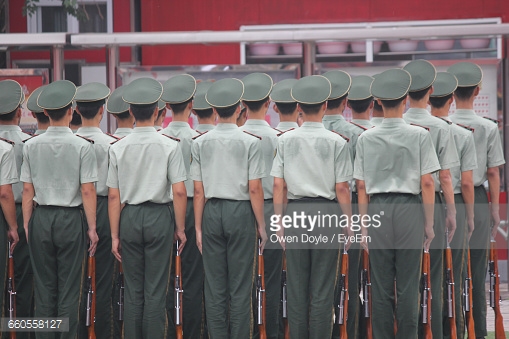 The problem is that no one in China knows world history well enough that first Germany recovered dramatically after WWII, then Japan, quite awesomely, and then for want of an India in the Game Singapore became Mumbai, etc. Taiwan and Hong Kong soared, for clearly understandable reasons of good economic policy. Bernie Baruch and my late great uncle called the US post war recovery—everyone thought the depression would begin again. Mauritius is doing not badly.

So the Chinese are astonished to see their mudfilled polluted cities full of smokestacks and industry, and to eat something other than cabbage all winter. To them this is a miracle beyond miracles in human history. But, it is no. It is what happens if you follow the directions, as the Bharatiya Janata Party has finally done in India. Even Russia is gowing at 1%. Without this context, which, like real economics, is not widely understood in China, the Chinese are imagining they have split the atom and discovered a whole new type of human society. So their heads are swelling, they swagger around, tick off India for trying to grow as well, etc. This is a product of pure ignorance and lack of comparative perspective.

Furthermore, China has NOT followed the directions. Instead of political and economic rules, of which she has none, she has substituted personal mafia style politics (note: no international hotel or restaurant company has an investment in Sicily). She has played dirty — her currency is not even convertible unlike the mighty Rupee —and relied on floods of foreign capital coming in, just why I am not sure, and floods of Walmart Aloe and Cream lotion (which has never been within 100 miles of a cow or 1,000 of an aloe and may well be germ-filled or toxic).

Now China is looking to build bases for her immense navy in small poor countries she can bury in debt. Why? Normally you had an empire and a navy to patrol it which meant coaling stations. China has no empire at all except internally, but she is building a lot of coaling stations.

I think the reason is simple: the US has bases in England, Germany, Italy, Japan etc., and as the Chinese see it, is therefore able to boss them around. So get a base in Sri Lanka or Pakistan, the reasoning goes, and you can likewise boss them around. A simple but utterly wrong parallel that reveals an utter lack of understanding of what an alliance is. They have it backward. Even empires were more complex. They had governments, institutions, etc., with the sword in the background.

What about the talk of the imminent attack on Taiwan, etc.?

(1) This completely ignores alliances. They form in response to threat. China has tried to acquire things by stealth, or under Obama just acquire them knowing that we were focused on how China would help us deal with Iran (I kid you not). The other countries in the region have recognized the threat. I would argue not one is happy ever, as their officials top up their accounts in Vaduz. Even Russia and Pakistan have grave cause for concern.

(2) So whatever happens will unfold slowly over a period of years. Just as Chiang Kai-shek would have put you away if you suggested that China would not be recovered BUT if you said 11 June 1966 is the day to go, all is in alignment, he would have urged more research. So, I doubt any Chinese leader will say: 3,2,1 operation wash Fuxinggang in blood begins now. He will say, we need more research, etc. They are banking on psychology.

(3) Even now, however, the Chinese psychological edge is deteriorating. So they have a rustbucket carrier. Japan now has four carriers for VSTOL F-35 that used to be «helicopter frigates.» That, plus US and I reckon British carriers, is alarming. Will the French permit England to have two US class carriers? I foresee two successors to the troubled Charles De Gaule carrier. And Japan is considering building real carriers. They built the Hōshō, the first one in 1922, so they have some experience. Will the Russians smile as the Primorski Krai is menaced along with Vlad and Kamchatka? What will the Pakistanis do when Islam strengthens? And what is China going to do about the “Turkestan Ulcer”? Confiscating Korans is probably not the answer. In any case over say five years of footsie, the Quad will close all the gaps with certain Chinese systems. Remember in WWII the Japanese had a plane we could not match until late 1943, and the long lance torpedo. They still lost.

(4) In other words, Time is not on China’s side internally or externally. She will gradually force her targets to match and overmatch her. But no moment will arrive that precipitates a real offensive. She is counting on the impressiveness of her shiny military and her fifth column here in the U.S.

(5) Given this is internally driven, can the chinese non-system survive a setback? A student of mine was OD when Mrs Gandhi’s Sikh bodyguard unloaded his submachine gun on her. Nothing happened. Everyone knew the order of succession and what to do. Suppose someone unloads an AK-47 on Xi? China descends into sanguinary crisis. My best student at the Naval War College was Richard Lim, later Singapore CNO, a brilliant, modest, congenial man. If the Chinese had chosen to smite Singapore as they did Vietnam in 1979 (very murky) so that the government told Richard to sink their task force, it would all be on the bottom of the sea I am certain. How does that look in China’s state-owned Global Times?

(6) To conclude, China’s policy and strategy are deeply flawed. They have birth defects and will prove counterproductive, while her tactics are inadequate to the immense task. i expect them to figure this out and turn down the heat.  If they try anything funny they will take a real beating.

Finally the deeply wrong US analysis comes from Kissinger, Nixon, and Marianna Liu (we all have one — she was a good Kuomintang (KMT) type but Nixon had little concept of China’s complexity).  Instead of discarding it as wrong, many are so accustomed to the received policy  that they think it is right. This is our problem, but the Chinese will hasten our correction.

Ever since Abe was reelected in Japan I have been rather optimistic. I think the Chinese are getting collywobbles. We however have to send a lot of our top China types to the minor leagues and think this through carefully. Remember though, even without the US the problem would exist. Japan is not a potted plant; neither is India or Indonesia, and the list goes on. Hard to give up the delusions that brought you money and presitige if not 美女如雲, but no alternative exists for the China lobby.