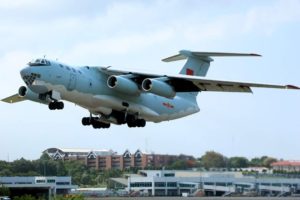 In Communist China’s long game, this is a very important development. The PRC is effectively colonizing a democratic neighbor and treaty ally of their chief rival, the United States, while driving a strategic wedge deep into the heart of the Western Pacific – without firing a single shot.

China’s illegal construction and militarization of five man-made island fortresses in the South China Sea has elicited outrage.  But the PRC is laughing at the world.  As  reports of a Chinese People’s Liberation Army Air Force (PLAAF) IL-76 landing at Davao City on June 8 suggests, China is in the process of buying and colonizing a 7,000 island unsinkable aircraft carrier, while creating a brilliant encirclement and containment strategy to directly threaten every regional neighbor and rival.

There is no sunny future here for the Philippines’ weak democracy – and China will see to it.  Short of an Indonesian-style purge, those Chinese immigrants are in the Philippines to stay, and are being joined by thousands more each day.  In rapid succession, we are likely to see at least a political resurgence of the Communist Party of the Philippines (CPP) and other Socialist advocacy groups – including the Catholic Church – which has a history of supporting the CPP.  Even though Duterte allegedly hates the CPP with a passion, China knows he won’t be around to protest later – or even now – to provide a modicum of Counterintelligence pushback against Chinese Intelligence Services currently operating in the completely unrestrained and target-rich environment created by the president himself.  Given the unfortunate history of corruption and poverty in the Philippines, Duterte’s eagerness to court Chinese investment and tourism will likely see greed triumph over freedom and democracy.  This could be met with mass Filipino unrest, once the populace more fully understands what their crooked leaders have done to them, but even that is in doubt if China succeeds in making a few more Filipinos “rich”.

Demetrius Cox is a retired Naval Officer, active researcher, analyst, commentator, and consultant.  He has lived and worked in the Indo-Pacific region for over three decades, and specializes in science, energy, defense, and policy matters. JPR Status: Opinion.