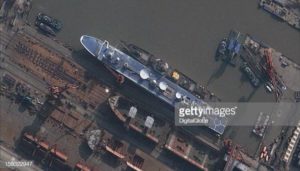 JIANGANAN SHIPYARD, SHANGHAI, CHINA-JANUARY 4, 2012: This December 25, 2012, image shows a probable PLAN Type 052D (DDGHM) destroyer tied up alongside the Yuan Wang 5 (YW-5) space tracking ship, which is docked in the shipyard’s construction basin. The YW-5 is similar to the YW-3 in size and function, including military applications. DigitalGlobe via Getty Images

On the night of July 16, four days after the second anniversary of the July 12 Permanent Court of Arbitration win by the Philippines against China in the Hague, a Chinese missile tracking ship with 远望 Yuan Wang 3 (YW-3) emblazoned on the side, eased up to Sasa Wharf in Davao, Philippines. Davao is the home turf of President Rodrigo Duterte, now in Malacañang Palace, and the ship was likely visiting at his personal invitation. The Chinese characters for Yuan Wang (远望) mean “gazing into the distance”, and are sometimes translated as “long view”.

Only the U.S. and Australia have visiting forces agreements that allow, and legally constrain, U.S. and Australian military presence. China has no such public constraints, and for that reason as well as others detailed below, poses a risk to Philippine sovereignty. Last year, Davao also hosted a People’s Liberation Army Navy (PLAN) guided missile destroyer, guided missile frigate, and replenishment ship.

Defense Secretary Delfin Lorenzana initially billed the YW-3 as a “research ship” and the visit as “nothing unusual” to Philippine media in text messages released once reporters started asking questions. The Philippine Ports Authority said 200 crew of the ship would visit tourist spots.

But the YW-3 as recently as 2007 was reported as under the control of the PLAN according to archived Sinodefence data, and the ship is currently subordinated indirectly to the PLA as a Space Event Support Ship (SESS). The PRC has approximately six such ships, and the YW-3 is the oldest in active service. Two others are retired, and one was rumored destroyed during target practice with a DF-21 ballistic anti-ship missile. There is insufficient evidence extant in the public domain to confirm such an exercise.

The PLA deploys these multi-dish ships in the Pacific and Indian Oceans to support satellite launches, according to Capt. James Fanell (USN, Ret.), former Director of Intelligence for the U.S. Pacific Fleet. Michael Listner, Principal at Space Law and Policy Solutions, said, “Yuan Wang 3 is one of four tracking and data-relay ships China uses to maintain global contact with spacecraft in orbit, including its Shenzhou spacecraft and its space station operations. They effectively perform the same function as NASA’s Tracking and Data Relay Satellites (TDRS), although China is building a similar on-orbit capability. The Yuan Wang-class ships also provide tracking and telemetry capability for [Intercontinental Ballistic Missile] ICBM full-range flight tests, [Submarine Launched Ballistic Missile] SLBM and other rocket tests. They effectively provide support for both scientific research and weapons development, which is not surprising as China’s ‘civilian’ space program is merged with the PLA.” Two additional Yuan Wang class ships provide transport for Long March 5 missiles.

Military, Philippine and China analysts have pointed out that the SESS and other naval ship visits could be part of a campaign by China to acclimate the Philippines to the presence of PLA military forces on Philippine soil. This incremental introduction of China’s military, known colloquially as the salami slicing or cabbage strategy, is a continuing threat to Philippine sovereignty. The PLA is present in the Philippines without a treaty ratified by the Senate as required by Section 25 of the 1987 Philippine Constitution.

Both the U.S. and Australia are increasingly in geostrategic conflict with China, and therefore the Philippine hosting of Chinese military forces corrodes Philippine defense alliance relations. “Is President Duterte silently allowing the PRC to establish the PLA’s military presence in the Republic of the Philippines?” Capt. Fanell said. “What does this mean for the US-Philippine Mutual Defense Treaty?”

By repeatedly distancing the Philippines from the U.S., Duterte since his election in 2016 has made his country increasingly vulnerable to China, to the point where Duterte can use the threat of war from China to publicly justify acquiescing to Chinese demands for territorial concessions. Duterte has failed to sufficiently call on the U.S. for assistance in defending Philippine territory against China. But neither has the U.S. shown sufficient interest in defending the Philippines, including when China occupied Johnson South Reef in 1988, Mischief Reef in 1995, or Scarborough Shoal in 2012. The U.S. usually prioritizes trade or North Korea issues in negotiations with Beijing. As in the case of the Philippine political process, U.S. lassitude against China has in past administrations likely resulted from the permeability of democracy to the influence that China wields over politically powerful domestic businesses and individuals, as well as over its ally North Korea.

Nevertheless, President Duterte has gone overboard in his seeking of increased engagement with China to the point of offering his country into extraordinary debt in exchange for Chinese infrastructure loans and alleged kickbacks, according to protesters and experts. Economically and militarily, Duterte is risking a gradual evolution of the Philippines into a satellite of China. Once in China’s grip, like Cambodia or Laos, getting back into an alliance with the U.S. and Australia will be increasingly difficult.

The YW-3 visit to Davao perfectly positioned it, not only to track missiles, but to track the Philippines as China launches the country into its own Sinosphere, forever leaving the earthly paradise of sovereign independence it once knew. Let’s hope somebody votes the astronaut of Malacañang out of office before the countdown completes.