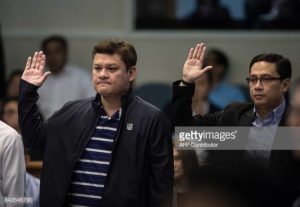 But, experts have confirmed that alleged kickbacks and drug shipments, if true, would likely come through Filipino Chinese networks. Current Philippines President Rodrigo Duterte himself has self-identified as Chinese in the course of affirming his sincerity to an accommodating position on the South China Sea conflict. He said this to a correspondent on CCTV, a Chinese state television network.

Asked about President Duterte and influential Special Assistant to the President Mr. Bong Go, one expert replied, “Duterte has been given money by the Chinese as early as when he was mayor [of Davao City, Mindanao]. The Chinese will not give it to him directly, but through the Filipino Chinese. Bong Go is a Filipino Chinese.”

Another source with knowledge of elite networks in the Philippines confirmed that Chinese intelligence services focus on Filipinos of Chinese ancestry in their attempts to infiltrate the Philippines, including Mr. Bong Go and other Filipino Chinese in President Duterte’s inner circle. He added that some Chinese networks in the Philippines specialize in the illegal drug trade and business more generally, and serve a dual intelligence function. He said that China currently has “unprecedented access” to President Duterte.

Ethnicities other than Chinese are also targeted, of course, but Chinese authorities single out those of their own ethnicity, putting them into particular danger. This is arguably a racist or discriminatory practice by China’s intelligence services, which victimizes and endangers overseas Chinese. A former attaché in the United States’ embassy in Beijing, for example, explained that China’s intelligence services target those of Chinese ancestry who work in foreign missions. “Ethnic Chinese serving in Western embassies in China bear special risks. Chinese intelligence services vigorously target them for compromise. The CCP treats them like race-traitors when they aren’t compromised, and their American countrymen are sometimes insensitive to the pressure they are under. I’ve known ethnic Chinese Americans that finished their service in China embittered by the experience.”

Another former attaché, this one defense attaché in the U.S. embassy in Bangkok, wrote that China’s strategy of targeting those of Chinese ancestry extends back decades. “Targeting the diaspora has long been the practice,” he said. “In the 1980’s, when ethnic Chinese were still a rarity in the foreign service, it was the ethnic Chinese wives who were targeted. I know of a case of an American official in the Embassy in Thailand who had an ethnic Chinese-Thai wife, and he was being induced through his wife, who was dangled with tempting business propositions and offers of cash.”

The U.S. Central Intelligence Agency, tasked with assisting counterintelligence at U.S. embassies abroad, declined to comment. Four sources of information in this article asked to remain anonymous because they were not authorized to speak on the subject, or because they feared reprisals.

Anders Corr, Ph.D., is the publisher of the Journal of Political Risk. JPR Status: Opinion.