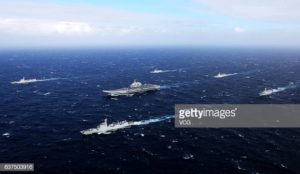 Satellite images show that China is making rapid progress in building its new Type 02 aircraft carrier at the Jiangnan Shipyard in Shanghai. The Type 02 is a larger design than Beijing’s first two carriers which were based on Soviet-era light carriers of about 67,000 tons and which lacked catapults for launching first-rate fighters. They used “ski jumps” to put planes into the air, limiting them to the small, short-range J-15 “Flying Shark” fighter-bombers. The Russian-built/China modified Type 01 can only carry 24 of these warbirds, though the China-built 01A, which is about to deploy, may be able to carry a few more. The Type 02 is a much larger design more in line with American carriers. At an estimated 80,000+ tons, it will be able to carry 40+ fighters as well as supporting aircraft such as early warning and control planes. In comparison, the typical U.S. Navy carrier has 60+ fighters along with other support aircraft. They are also nuclear-powered which the Chinese carriers are not. This does not mean, however, that American naval-air superiority is assured. END_OF_DOCUMENT_TOKEN_TO_BE_REPLACED