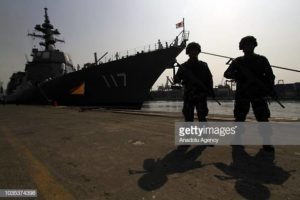 Hearing an analyst say recently that we must come to terms with China, led me to spit out my coffee and ask myself, more importantly, “What about Japan?”

Forgetting about Japan, or what might be called “Japan forgetting”, is a besetting failure of American foreign policy. It has been since the early years of the last century, most notably after 1922 when the Anglo-Japanese alliance, a source of stability comparable to the 1887 Reinsurance Treaty of Bismarck and Wilhelm I. In 1890 when Wilhelm II refused to renew the treaty, leading in part to World War I.

The end of the Anglo-Japanese alliance came with the Washington Conference of 1921-22. If you are serious about understanding China, read the “Conference on the Limitation of Armaments”, which was published by the U.S. Government, half in English and half in schoolboy French, so it is not as formidable as it appears. It is the indispensable starting point.

In 1921, recall, the Japanese launched the Hōshō, the world’s first purpose built aircraft carrier. Not the U.S., the the British, but the Japanese built the first one from the keel up. Why?

China’s policy goal is to preside, in solitary eminence, over the world. She imagines that is what the U.S. does, and so do some of the more misguided amomg us. In fact, we do no such thing: other countries seek alliances with us and imitate us (they “bandwagon” in the precise language of political science) but no one bandwagons with China. So she is jealous and wants to displace us. She focuses on herself and this goal, which is why her policy with all her neighbors is such a disaster. Some of us buy into this, however, and see the situation as a US-China binary.

But suppose we did what they suggest and withdrew from Asia more or less and dialed back the tension with China. What would Japan do? Let us not assume they are potted plants. President Franklin Delano Roosevelt made that mistake when he assumed that they would not attack our fleet at Pearl Haror—for if he had actually expected war he would have kept it on the West Coast where rail connected it to our former industrial heartland. FDR thought the Japanese could be bluffed.

If we look to the past we find Japan is not status obsessed like China, but is insistent on sovereignty and security. Uchida Yasuya, the great Japanese statesman and diplomat of the 1920s-30s, reflected on how to protect an isolated Japan such as the Washington Treaties created, with good will and a pious belief in mutual security rather than alliances. The Hōshō actually slid into the water in 1921, to no note, but it was part of the answer. Regardless, Japan had to be fully self sufficient for her own defense. She is not now. My sense though is that the can become so very quickly indeed if the Japanese feel sabishi, or neglected, as they did after Washington. One reason we have no kinetic conflict with China today is that China knows Japan will not hesitate to sink most of China’s fleet while confining the rest to the west of the first island chain—and will do so if necessary no matter what Washington says.

U.S. China policy in the analogous period was totally uncritical, taking its lead from China, which did not know where she was going. Japan, alone, was bloodily  taken over by fascists—the democrats resisted vigorously and often fatally– and militarized impresssively. Earlier Uchida had come to DC and was given the bum’s rush, or rather delay, by the Secretary of State. It was not good enough to avoid World War II.

So let us today recall, that we do not currently have a US-China binary, though humiliating and displacing Washington remains China’s policy goal. What we have is a formidable group of states that looks to us, but that would still be formidable were we removed. They would not appease China. Rather they would form an anti-China coalition that would be too much for Beijing. We see signs of this already.  So even our withdrawal—like our nonparticipation in Europe or Asia until we were attacked or war was declared on us—would not bring peace. Rather it would create a more dangerous situation, with less possibility of deterring China, and more likelihood of actual bloody and hideous fighting and destruction. China would not win.

Read Kissinger for purple prose on Japan and observe Nixon’s disregard of that country. Only Reagan restored the balance with his speech to the Diet on November 11, 1983. Today however militarization has greatly intensified, owing perhaps most to the catastrophic policies of the Obama administration, though many share the blame. As under the useless Secretary of State Frank Kellogg, we look to China as our lode star. But China is lost. She is unstable and divided.

I believe that this century we should understand that stable relations with an unstable China are impossible. We need to ally with Japan as closely as with the British, as the late Ambassador Hisahiko Okazaki always insisted. That alone will keep things from boiling over. We must also cultivate friendships with all the states in between.  That will preserve peace. A grand bargain with China is impossible and irrelevant. We might as well conclude a grand Asian bargain with Vaduz. We need to forget the century old Chimera of building an Asian order around China—abandon it. Instead we have to deal with the real, functional countries in the area, of which Japan is the most important.

I believe the current U.S. administration understands this. It will take awhile for the Japanese people to feel the full sabishi. When they do, though, expect them to become more dominant, and more so if we start trying to “balance” as we are counseled. Remember too, in addition to being perhaps the world’s most advanced nation, they are democratic and stand with us—for now. But they will never make themselves hostages to our weakness or indecisiveness. They will do whatever has to be done.