I was responsible for the 1st platoon electronic warfare vehicle, a Humvee used to counter remote-controlled Improvised Explosive Devices (IEDs). Most IEDs in Iraq were detonated by insurgents observing American convoys from afar, using devices like cell phones and walkie-talkie radios, to send electronic signals to a receiver on the explosives. My Humvee  created a “bubble,” preventing the signals from reaching the intended munitions and ripping through military vehicles and personnel. 2nd platoon’s function for this mission was to scout the road ahead and identify any threats to the motorcade. Because their humvee was down, my vehicle would be attached to them for this operation.

My Humvee was among dozens of American military vehicles escorting civilians (mainly Jordanians) driving empty 18-wheeler big rigs to the western border of Iraq. Two days earlier, these rigs had dropped off the supplies that provided necessary food, fuel and equipment to thousands of servicemen in our Area of Operations (AO). A resupply was now needed.

We snaked our way from the motor pool through Al Asad Airbase as the sun’s rays were beginning to pierce the skyline. The diesel engines droned in the background and the platoon leader’s directives could be heard over the radio in scratchy transmissions while we readied for departure. As our convoy approached the edge of the base, we made our weapons hot, locking and loading everything from 9 mm pistols to .50 cal heavy machine guns. I watched the round enter the chamber as I released the charging handle on my M-4 carbine and closed the dust–cover. Leaving the safety of the military installation and entering hostile territory, we needed to be ready for everything.

“Charlie 2-6 leaving the wire,” the second platoon leader announced over the radio.  The mission had begun.

The unit remained alert as we made our way to Main Supply Route (MSR) Mobile, scanning the road regularly for hidden bombs. Anything that looked out of place – from a piece of trash, to a wire running across the path – anything could be a potential threat. We accelerated as we headed westbound on the scorching-hot blacktop. The convoy was over a dozen kilometres long and would travel hundreds of kilometres during this assignment. Hours into our mission, there had been no vehicle breakdowns. In the sweltering furnace of the Iraqi desert, vehicles overheating was a common problem. We hoped our luck would continue despite the temperature now being over 110 degrees.

I sat in the front passenger seat with my rifle in my hands, telling jokes and making small talk with my crew, and every now and then, speaking into the radio to give periodic updates to the platoon leader.

Suddenly, the radio came alive with an atypical message from the company commander:

“BOLO. BOLO. We’re getting a message from higher to be on the lookout for a white, Chevy Suburban with Arabic writing on rear, passenger-side window.” 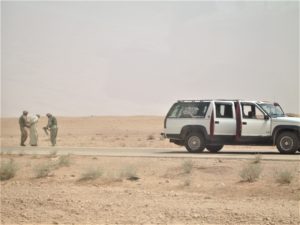 This notification did not give us much information. Was it a potential suicide bomber? Did it contain enemy combatants? Weapons? We were told nothing further.

“Charlie 2-3 saw a vehicle matching that description exiting Mobile a few mikes ago.” A paratrooper, in another lead element vehicle, announced over the platoon net: “We’re gonna check it out.”

I directed my driver to follow their lead. If this was a suicide bomber, our truck could potentially block any radio signal used to detonate the explosives.

Minutes later, the lead element had spotted the suspect vehicle and cut them off, stopping them in their tracks. We placed our vehicle about 40 meters away from the Chevy, and provided extra security for the paratroopers removing the vehicle occupants. Each passenger was taken out at gunpoint; the interpreter instructed them to keep their hands up while they were searched for weapons. The tension was high. Not knowing if one of these individuals was going to fire on us, or detonate a bomb, had us all on edge. Once the vehicle was empty, we had 10 individuals detained, including three children – two boys and a girl.

Our company commander notified his superiors of the situation on the ground. Within minutes I could hear the distant chopping of helicopter blades. Looking to the north, two UH-60 Black Hawks floated above the rolling mirage of the desert floor, headed our way. The helicopters landed on the blacktop in front of the Chevrolet and brought with them a storm of wind, blowing sand and pebbles across the scene. From the helos, several men disembarked and walked towards the detainees. Their uniforms bore no identifying information and each of them wore a long beard, the hallmarks of Special Operations Command (SOCOM). While providing security, I watched the special operators take custody of the adults and load them into the Black Hawks. I wondered what would become of the kids.

The operators searched the suburban and collected multiple documents, along with over a dozen bundles of cash. After they finished sifting through the contents of the car, one of the operators grabbed a wad of cash and walked over to the children. After speaking with them for a moment he handed the oldest child the money. He then pointed to the Suburban and motioned for them to leave. The oldest child, who appeared to be about 14, climbed into the driver seat and nervously started the vehicle, barely able to see over the steering wheel. The other two children jumped in the back seats, and the 14-year old clumsily pulled out and started driving West. The leader of the SOCOM unit spoke with some of the paratroopers, shook their hands, and then boarded the helicopter. The pilots immediately increased throttle, and flew North.

We loaded back into our vehicles and got into formation. The 2nd platoon leader jumped on the radio and stated, “Charlie Mike.” We then continued our mission and headed towards Camp Korean Village (CKV). A few hours later we had arrived.

During the remainder of the mission I spoke with some of the soldiers directly involved with the detainees. According to the SOCOM operators, the adults in the Suburban had escaped a raid conducted the previous night. An American aircraft had followed the Suburban and developed intelligence on it to figure out who was inside: one of the individuals was a High Value Target (HVT). These guys were major players in the Al Qaeda cell functioning in our AO, individuals directly involved with thwarting the US military from bringing democracy and independence to Iraq. SOCOM needed to stop the vehicle, but did not have ground assets available at the time. An approaching sandstorm was going to make tracking the vehicle impossible, so they had decided that if the vehicle got too close to the Syrian border, they were going to destroy it with a missile. In a final effort to capture – rather than kill – the insurgents, they sent out the BOLO hoping a ground unit could get to them – our unit had done just that. The SOCOM guys were impressed by our effort and happy they could spare the lives of the children (who were told to drive the Chevy to their relatives in Syria). By stopping that car, we had not only captured Al Qaeda insurgents, we had also saved the lives of children.

The next morning, we continued our mission by picking up the resupply trucks in Jordan and escorting them back to CKV. The following day, we arrived at Al Asad.

It was about 2100. Hot, dirty and exhausted, I grabbed my weapon and my ruck-sack, and headed to the barracks. I welcomed the night air which wasn’t cool, but it was a nice relief from the scorching daylight temperatures. I was still pondering the events and non-events of the previous day: the potential insurgent attacks we avoided, or any number of ways that mission could have ended differently. I felt good about what I had witnessed, and helped accomplish.

A flash of light lit up the sky ahead of me and I heard an explosion. My adrenaline kicked in and I started searching for the source of the explosion. I clutched my weapon and prepared to defend the base. Were we being attacked? Had the wire been breached by enemy fighters? I heard a soldier shout, “’MURICA!” More explosions erupted in front of me, only this time they were in different colors: red, white and blue lights were decorating the night sky. Looking around I realized they were emanating from behind the berm outside the barracks area. The base commander had authorized a fire-works show. I had forgotten it was the Fourth of July.

I paused a few moments and watched as the colorful explosions filled the sky. Listening, I could hear the voices of troops reacting to the light show: “AIRBORNE! YEEEEAH!” as they enjoyed the moment. Overcome with emotion, I thought about the totality of the circumstance: here I was, a paratrooper with the 82nd Airborne Division, on my second combat tour, heading back to my hooch after a successful mission in which we had captured terrorists and saved the lives of children, and celebrating Independence Day. I was never more proud to be an American than on that night. Knowing that I was doing my part to help the Iraqi people gain their own independence made it even better. One day, Iraq would be free, and I would be able to claim a small part of that victory.

Heath B. Hansen joined the U.S. Army in 2004, got orders to the 82nd Airborne Division, deployed to Afghanistan from 2005 to 2006, and deployed to Iraq from 2007 to 2008. He received the Combat Infantry Badge, Parachutist Badge, Australian Parachutist Wings, Operation Enduring Freedom Medal and Operation Iraqi Freedom Medal. JPR Status: Report.