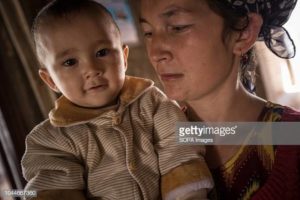 A Uyghur woman holds her son in Kashgar old town, northwestern Xinjiang Uyghur Autonomous Region in China, July 8, 2017. Over 10 million Uyghur and other Turkic Muslims live in Xinjiang. The Chinese Communist Party (CCP) has for decades eroded the Uyghur language, traditions, and cultural identity, leading to civil unrest. The CCP cracked down harshly, including through detention of up to 1.5 million Turkic Muslims in reeducation camps. Children of detained parents are often kept in highly secure facilities for children as young as infants, as detailed in this article. Photo by Guillaume Payen/SOPA Images/LightRocket via Getty Images

About half a year after the onset of this horrifying campaign, first reports started to emerge that the children of so-called “double-detained” parents were being placed in state care. Due to a complete lack of official reporting and the state’s denial that this internment campaign is even taking place, it has been extremely difficult to ascertain the scale and exact nature of such intergenerational separation. Some informants claim to know that these children are kept in orphanages. Others, including some of the affected parents, were told that they are being sheltered in regular public schools with boarding facilities. This includes boarding preschools that can care for children who are younger than the regular school age.

The possibility that the Chinese state is implementing a larger-scale or even systematic policy of intergenerational separation of parents and children is a highly emotional topic among the affected exile communities. Few issues have the potential to inspire more concern about cultural or physical state-sponsored genocide than this one. Notably, Xinjiang’s government appears to be as nervous about the children’s situation as they are about the internment camps. When Associated Press (AP) reporters went to Hotan City’s “Kindness Kindergarten”, which reportedly shelters four children of one of their Uyghur informants and photographed the facility, they were immediately surrounded by armed police and ordered to delete their visual evidence.[3]

In the context of this urgent human rights crisis and challenging research context, this article attempts to systematically present and analyze all available evidence regarding state-initiated intergenerational separation in the context of Xinjiang’s political re-education and internment campaign. This evidence consists of government policy and implementation directives, different kinds of official reports and related state or private media articles, educational statistics, public construction and procurement bids, village-based work team reports, and official propaganda pieces that extol the benefits of the so-called “vocational training”.

Government documents provide clear evidence that there are large numbers of children with one or both parents in some form of internment. These documents specifically refer to “couples where both partners are detained in re-education” (夫妻双方被收教), or “couples where both partners are in vocational training center” (夫妻双方在教培中心).[4] They also testify to the fact that this has developed into a concrete and urgent societal issue. From early 2018, the state began to issue urgent directives on how to deal with the virtually orphaned children of single or “double-detained” parents, be it through special care institutions or the regular education system. Local governments began to require schools to provide one-on-one “psychological counseling” and to proactively scan the state of mind of students with parents in detention in order to preempt trouble. Schools must now be prepared to mobilize entire teams of teachers, staff and other students to deal with such students when they are in distress, as well as taking measures for making up for their loss of family ties. Other evidence shows that schools have developed “emergency response plans” that include dealing with students with detained parents in a timely and effective manner in order to prevent violent incidents.

Additionally, the state has issued very detailed forms that are to be used by local authorities to log the situation of children with one or both parents in extrajudicial internment or prison. This data, which is fed into extensive databases, indicates that in some Uyghur majority regions, significant numbers of children are without the care of both parents. Government data shows that just in one particular township in such a region, well over 400 minors have both parents in some form of internment, with many others having one parent interned.[5] Children whose parents are in prison, detention, re-education or “training” are classified into a special needs category that is eligible for state subsidies and for receiving “centralized care”. This “care” can take place in public boarding schools or in special children’s shelters.

This does not mean, however, that these children are well taken care of. The real-life report of a Han Chinese volunteer teacher, posted on the Jiangxi Teacher’s College website, paints a harrowing picture of the consequences of systematic intergenerational separation.[6] The young man taught in an impoverished rural primary school in southern Xinjiang, where pupils were mostly without parents due to seasonal work or internment in vocational training camps. The young teacher wrote that these Uyghur children were in an extremely pitiful state, wearing thin clothes despite freezing December weather. The classroom was filled with an unbearable stench because the children neither washed nor changed their clothes.

In addition, the government has issued propaganda pieces that argue that the children of detained parents derive significant benefits from this separation, that both parents and children need to “study”, or that the “left-behind children” of parents who “work” are “happily growing up under the loving care of the Party and the government”.[7]

Overall, this article presents several key areas of evidence that in combination provide significant and potentially incriminating evidence for a coordinated state campaign to promote different forms of intergenerational separation. Xinjiang has not only created most of the necessary preconditions for systematically creating varying and substantial degrees of intergenerational separation; when placed in the wider context of Xinjiang’s securitization drive, the combined available evidence tells a story of the state’s dramatic race against time to create a vast and multi-layered care system that enables it to provide full-time or near full-time care for all children from a very young age (in several instances for infants that are only a few months old). In some Uyghur majority population regions in southern Xinjiang, preschool enrolment more than quadrupled in recent years, exceeding the average national enrolment growth rate by over 12 times.

In particular, this state care is taking place in highly secured, centralized boarding facilities, independently of any guardianship that these children may or may not have. Driven by multi-billion dollar budgets, tight deadlines, and sophisticated digital database systems, this unprecedented campaign has enabled Xinjiang’s government to assimilate and indoctrinate children in closed environments by separating them from their parents. This separation can take various forms and degrees, including full daycare during work days, entire work weeks, and longer-term full-time separation. When taking into account the threat that Xinjiang’s education system makes children report on their parents, it is safe to assume that parental influence in general, and intergenerational cultural and religious transmission in particular, are being drastically reduced. In some instances, parental influence is quite possibly almost completely eliminated.

The available evidence presented in this article can be viewed from four angles. Firstly, existing witness accounts from former detainees and their relatives indicate quite consistently that children whose parents are in some form of internment are put into either orphanages or boarding schools, with the latter case being more prevalent. Secondly, government plans show that the state is requiring local authorities and schools to comprehensively deal with children whose parents are in some form of internment. Thirdly, official documents testify to an entire set of policies, most of them initiated within the first six months of Chen Quanguo’s deployment to Xinjiang, that are designed to systematically boost the ability of the state to house children of all ages in increasingly centralized and highly securitized educational boarding facilities. Fourthly, government reports and construction bids give evidence of the construction of such highly secured boarding facilities in the public education system and through special child protection centers. All this took place in the second half of 2018, at a time when Xinjiang’s internment campaign was affecting more and more population segments, and when re-education and other detention facilities were expanding significantly in both number and size.[8]

It is only with what I refer to as the weaponization of education and social care systems that the region’s hair-raising political re-education and transformation drive is achieving its terrifying degree of seamless comprehensiveness. Increasing degrees of intergenerational separation are very likely a deliberate strategy and crucial element in the state’s systematic campaign of social re-engineering and cultural genocide in Xinjiang. END_OF_DOCUMENT_TOKEN_TO_BE_REPLACED